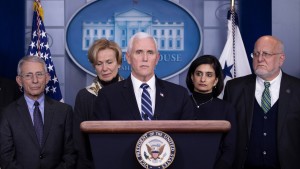 USE THE (TASK) FORCE, LUKE

Well, it may soon be a wrap on the coronavirus task force.

It's not. Case numbers continue to rise and projections indicate they won't let up. The US death toll is now over 70,000. Still, President Trump says it's time for the country to move on to "other phases" of the response (hint: the economy). Vice President Mike Pence – who leads the task force – said the change speaks to the US's "tremendous progress." All of this means the group we all see at press briefings could dissolve by Memorial Day.

It apparently gets replaced by an advisory group that includes some of the same public health experts, like Dr. Anthony Fauci and Dr. Deborah Birx. Some responsibilities could be transferred to agencies like FEMA. In the new setup, it's unclear who would coordinate between the agencies to track progress on things like vaccines, treatments, and testing.

So does it matter whether there's a task force or not?

We'll soon find out. Remember: the group was formed earlier this year as the US started to see its first confirmed cases of the virus. The goal was to "monitor, contain, and mitigate" its spread while keeping Americans informed. Since then, its members have pushed to expand coronavirus testing and helped create guidelines for easing coronavirus restrictions.

This isn't the first time the Trump admin has hit the brakes on a group focused on pandemic response. But this time, it's restructuring in the middle of a pandemic. And it's not clear what the transition plan is.

Who's watching his back...

Venezuela's Nicolás Maduro. He claims to have detained two Americans...and accuses them of trying to capture and kill him. Reminder: Maduro's one of two people in Venezuela saying 'Call Me By Your President.' Now, he's accusing the other one – opposition leader Juan Guaidó – of being in on the plot, and the US and Colombia of helping. The US and Colombia are saying 'nope, we have nothing to do with this.'

Uber and Lyft. Yesterday, California sued the two companies, accusing them of violating drivers' work rights. A state law from January makes it harder for ride-share companies to treat drivers as contractors, not employees. And would generally require them to stop skimping on things like disability insurance, overtime pay, and minimum wage. But California says Uber and Lyft have yet to fall in line. And is suing for back wages that could total hundreds of millions of dollars. Lyft says 'working on fixing that.' But Uber has said it's in the tech and not ride biz, and is ready to suit up.

This study. It found that gas stoves can make indoor air two to five times dirtier than outdoor air. Problem, because they're in a third of US households. And one analysis found children in those households have a 42% higher chance of asthma. The report's rec is to switch to electric, which can release significantly fewer toxic gases. And if you can't, consider things like opening the windows, cooking on the back burners, and using an air purifier.

Who gets to have a big graduation after all...

The Class of 2020. Celebrities and politicians are rallying to give students a virtual commencement to remember. One date to add to your cal: May 16, when former President Barack Obama, Malala Yousafzai, LeBron James, and others are showing up on small screens across the US to give seniors a proper sendoff.

Skimm More: Stay-at-home doesn't have to mean bored-at-home. Our app keeps you up to date on new events worth adding to your cal. Download it here and start your free trial.

Where there may be "I Voted" stickers next month in the end...