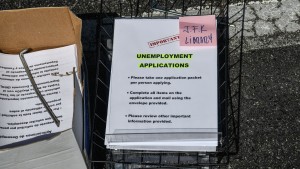 THE END OF AN ERA

Today, all eyes are on April's jobs report.

April was the first full month that most of the US was under stay-at-home orders due to COVID-19. The Labor Department's monthly jobs report will give insight into where the economy stands. Just last week, another 3.2 million Americans filed for unemployment benefits – adding to the over 33 million from the last seven weeks. But the report coming out this morning could show things are worse than originally thought.

Potentially record-breaking. Here are some things to look for once the DOL releases its stats…

Unemployment numbers. The report is expected to show the unemployment rate at around 16% – the highest since the Great Depression. And that the US lost more than 21 million jobs in April alone, wiping out around a decade's worth of job gains in four weeks. Some experts say the actual number of unemployed could be even higher than the one we'll see today, as reporting systems for some states were overloaded.

Permanent vs. temporary job loss. The report should provide numbers differentiating between those who've been laid off, furloughed, and had their hours or pay reduced. And will give a breakdown of unemployment by race and between men and women. Today's report is expected to paint a clearer picture of the state of the US economy. Speaking of…

Insights on recovery. It's still unclear how long it will take for the economy to bounce back. But today's numbers could help Americans get a better idea of what the path to recovery looks like. The higher the percentage of temporary job losses, the faster our economy could recover (since those people will be going back to work eventually). Or vice versa. The report could also signal which sectors are hiring, key info for those who are newly out of a job.

In February, unemployment rates were at a half-century low. Now, we're expected to see the most devastating jobs report in years, potentially ever recorded. It's a reflection of the steep economic toll COVID-19 has taken on Americans – and the recovery could take years.

PS: Many people are struggling right now. We explain here who qualifies for unemployment and how to file.

Who people are running in honor of…

Ahmaud Arbery. Yesterday, authorities arrested two men in connection to his death. On February 23, Arbery – an unarmed 25-year-old black man – was jogging in a suburban neighborhood of Georgia when he was chased down and killed by a former police officer and his son, both of whom are white. The men claimed they thought Arbery looked like a burglar. And one prosecutor said they acted within the state's citizen arrest laws. Arbery's family lawyer called it a "modern lynching." For months, no one was arrested. But this week, a video appearing to show the shooting was released publicly – sparking national outrage. Now, more than 10 weeks after Arbery's death, police have arrested the two suspects and charged them with murder. It came the day before what would have been Arbery's 26th birthday. Supporters are running 2.23 miles today in his memory.

Who's speaking out on camera…

Tara Reade. This week, the woman accusing Joe Biden of sexual assault held her first sit-down interview since Biden publicly denied the allegation. The interview – conducted by Megyn Kelly – addresses Reade's claim that Biden assaulted her in 1993, when she worked as a staffer for him in the Senate. The full interview has yet to be released. But clips show Reade saying she'd "absolutely" be willing to testify under oath and face cross examination. And that she would take a polygraph test if Biden took one, too. She also called on Biden – who's expected to win the Democratic nomination for president – to drop out of the race. Yesterday, Biden's campaign responded, claiming there are "inconsistencies" in Reade's story and reiterating that "these allegations are false."

The Justice Department. Yesterday, it said it's dropping the criminal case against President Trump's former national security adviser Michael Flynn. Reminder: Flynn pleaded guilty to lying to the FBI back in 2017 about his contacts with Russia and lobbying work for Turkey. But he later cooperated with special counsel Robert Mueller's investigation, which discovered no evidence of a Trump-Russia conspiracy. Mueller recommended Flynn get no jail time. And now, the DOJ is tossing its case, saying the FBI was out of line to even interview Flynn, reportedly since his contacts with Russia during the Trump transition period were "entirely appropriate."

Who's finally giving an Xplanætion...