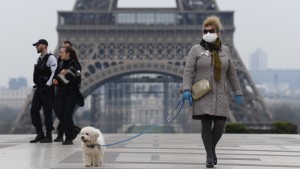 As the US begins to reopen, other countries could be sending a warning.

Some countries that have loosened coronavirus restrictions are now seeing more cases. Like…

South Korea: The country was originally touted for how it handled the outbreak, which included mandatory isolation, mass testing, and contact tracing. With everything seemingly under control, it started easing up on some restrictions last month and even held a national election. But on Sunday, it reported 34 new cases – the biggest one-day spike in a month. In Seoul, all nightclubs and bars are once again closed, and President Moon Jae-in said to "brace for the pandemic's second wave."

China: Early last month, the country where the outbreak originated lifted its 76-day lockdown. Measures like strict testing, quarantine, and mandatory tracking apps helped them report a drop in infections. But this week, the country ordered new restrictions after two cities saw a spike in new infections. There's now a lockdown in Shulan, in the country's northeast. And there's a new cluster of cases (think: at least six) in Wuhan.

Germany: The country was one of the first in Europe to roll out widespread testing. It loosened restrictions last week. But yesterday, Chancellor Angela Merkel reportedly said Germans should still be "keeping their distance" after officials warned that the rate at which the virus is spreading is rising.

So is this a second wave?

Experts aren't sure. Yesterday, the World Health Organization said countries need to take a "slow, steady" approach in lifting restrictions to try to prevent a new wave of infections. And that approach includes three major steps. First, get the epidemic under control. Then make sure the health care system could cope with a potential second wave. And finally, provide widespread testing and contact tracing.

Are we there yet?

It doesn't look like it. Health experts say the US needs to be doing more antibody testing – which could help the country reopen, based on who might have some immunity to the virus. Right now, dozens of states have at least partially reopened. But President Trump is urging faster action, criticizing Democrats for what he described as moving slowly for "political purposes." Meanwhile, the White House hasn't been spared by the pandemic. Staffers must now wear masks or facial coverings after new cases were discovered last week.

South Korea, Germany, and China have each been held up as examples of countries that can have it all: a semi-open economy while maintaining a relatively low case count. But these new infections show how vulnerable all countries are – and they come as Dr. Anthony Fauci reportedly plans to warn the Senate today of the dangers of reopening too quickly.

Skimm More: We explain what reopening the US could look like.

What threw a curveball…

This antibody study. Earlier this week, researchers announced that less than 1% of MLB employees tested positive for COVID-19 antibodies. Back in April, more than 5,600 employees from 26 MLB teams participated in the largest antibody study of its kind. The goal was to gather data on the spread and infection rate of the coronavirus throughout the US based on a nationwide sample. When the results came in, researchers said they were surprised about the low positive rate, and that it appears the virus had not spread among the league. But they warned that its employees could still be at risk.

What students are cramming for...

AP exams. Yesterday, more than 3 million students started taking their college-level exams online. Because, COVID-19. The tests are open book and only 45 minutes (much shorter than usual three hours). But the changes have raised concerns about fairness. Not only because of the lack of equal access to reliable computers and internet service. But also for geographical disadvantages since students all over the world will be taking them at the exact same time – meaning some could be loading up their laptops in the middle of the night

The IRS. The agency is giving people who haven't yet received their stimulus check until tomorrow at 12pm to update their direct deposit information and get their money faster. After that, the gov will begin sending millions of paper checks that are expected to arrive later this month and in June. Don't snooze on this one.

Psst...we answered more of your stimulus money Qs here – from how much you can expect to whether you'll have to pay it back

When you can't get married at Niagara Falls...

This ought to make up for it