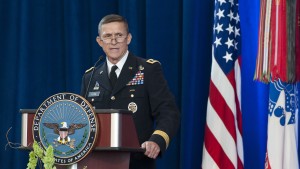 So...there've been a lot of headlines about Michael Flynn this week.

Yeah what's that all about?

Let's start with a refresher, shall we? One piece of advice: take a sip of your coffee because this story's more complicated than one-color puzzles.

In late 2016, Flynn – President Trump's incoming national security adviser – had a convo with a Russian diplomat to try to reset US-Russia relations. The FBI interviewed him about it and Flynn denied part of the convo – specifically, that he'd discussed sanctions policy. But the FBI said, 'hi, we have the transcript' so Flynn pleaded guilty to lying to the FBI and was due to be sentenced earlier this year. Fast forward to last week.

The Justice Department said 'let's actually drop those charges.' It called Flynn's convo with the diplomat "entirely appropriate" and said the FBI shouldn't have interviewed Flynn in the first place. Meanwhile, the judge in this case is looking into whether the DOJ's the one that's overstepping. But that's not all – we also learned more about Flynn's unmasking.

The practice of revealing a person's name in intel communications. In this case, Obama officials wanted to know who that guy was who kept coming up in reports during the transition (spoiler: it was Flynn). While this was legal, Trump saw the attention as evidence that Obama's admin had it out for him and his team. This week, we learned that dozens of Obama officials had requested to look at the name, including former VP Joe Biden. Biden's campaign says he had no way of knowing it was Flynn. Now, Senate Republicans plan to hold hearings on all this next month.

I need another coffee.

You do you. The main thing to keep in mind is that this story is being interpreted differently by different people. Here's how some people see Flynn...

His supporters…a tragic hero. Yes, he lied to the FBI...but it was about a policy conversation by an incoming admin official. As the FBI's own counterintelligence chief apparently wondered: was the goal of the Flynn interview to "get him to lie, so we can prosecute him or get him fired?"

His critics...the boy who lied. And now may get off without jail time. Some see the DOJ's move to drop the case as "unprecedented." And think focusing on Flynn is Trump's way of distracting from the coronavirus pandemic, which has killed more than 85,000 Americans.

This is a debate about Flynn's case – but it's also about the origins of the Trump-Russia investigation and what went down in 2016. Now, with Senate and DOJ investigations set to continue for months, the story's on track to leak into the 2020 election cycle. 2016: it wasn't over, it still isn't over.

Who else is in the spotlight this week…

Dr. Rick Bright. Yesterday, the ousted federal health official warned Congress that the pandemic could bring the "darkest winter in modern history" if more isn't done to stop it. He said the Trump admin doesn't have a testing strategy to fight COVID-19, is overly optimistic about its vaccine timeline, and missed early warning signs about the virus. It came after Bright filed a whistleblower complaint last week, claiming he was reassigned for pushing back on an anti-malarial drug President Trump has promoted. Trump called Bright a "disgruntled employee" who shouldn't be working for the gov.

Sen. Richard Burr (R-NC). Yesterday, he temporarily stepped down as chairman of the Senate Intelligence Committee amid an FBI investigation over his stock trades – and one day after federal agents seized his cellphone. Reminder: Back in February, Burr sold stocks worth up to nearly $2 million around the same time he was receiving private briefings on the coronavirus – but before the market crash. He's denied any wrongdoing.

What's out with something new…

The CDC. Yesterday, the agency put out new guidance to help businesses, schools, and other workplaces figure out how to reopen. The documents have "decision trees" for different categories (think: restaurants, camps, childcare programs, and mass transit). Each one has a checklist to help employers figure out if it's safe to bring people back in. The guidelines stress working with state and local health officials. They also emphasize social distancing, having flexible leave policies, and protecting workers who could be at higher risk of getting sick.

What's still on the rise...

Unemployment. Last week, nearly 3 million more people filed for jobless benefits for the first time. That means a total of 36.5 million have applied since March, when stay-at-home orders took effect due to the coronavirus. The latest numbers come as lawmakers are divided over which next steps to take to respond to the economic crisis.

Skimm More: We explain how unemployment benefits work and who qualifies (hint: right now, it's more people than usual).

Who's the Girl With a Pearl Jam video...