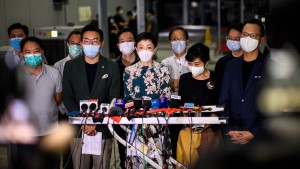 A law China's considering is setting off alarm bells in Hong Kong.

Remind me what the deal is there...

Hong Kong is a semi-autonomous Chinese territory that has its own laws, courts, and economy. That's because the UK (which ruled Hong Kong for over a century) gave the territory back to China in the '90s on one big condition: that the territory keep some of its independence for at least for 50 years. The deal expires in 2047, when Hong Kong becomes fully part of China. But some residents already feel their rights are going away – and protests erupted last year.

Millions protested a bill that would have allowed some criminal suspects to be extradited to China. The protests continued for months and at times turned violent, with police using tear gas and rubber bullets and some protesters throwing petrol bombs. The local government withdrew the bill in the fall, but activists said 'too little, too late' – and want their pro-democracy demands met. Meanwhile, the gov in Beijing wasn't happy, calling the protesters terrorists.

Got it. So what's happening now?

Today, China's legislature is considering a national security law that would ban "sedition, secession, and subversion" – effectively letting China bypass Hong Kong's local government and crack down on the protests. The legislation is expected to pass as early as next week.

China's legislature says the move is necessary for national security. And that it will serve the "fundamental interests" of everyone involved. But critics say it's an overstep into Hong Kong's independence. And that it ignores the territory's Basic Law (the equivalent of its constitution) which only gives the local gov the right to pass rules like this. President Trump warns the US would react "very strongly" if China passed the law. And US lawmakers across the aisle are threatening sanctions.

China isn't the only country looking to increase its authority while the world's attention is on fighting COVID-19. See: Hungary, Poland. But critics are worried it could signal an end to some of Hong Kong's biggest freedoms and trigger another wave of protests.

The Trump admin. Yesterday, President Trump said the US would withdraw from the Open Skies Treaty. The nearly 30-year agreement between 35 countries allows them to fly surveillance planes over each other's territory – so they can keep tabs on each other's military activities. It's intended to reduce the risk of war. But the Trump admin says Russia has repeatedly violated the agreement by not allowing aircrafts to fly over certain parts of its territory. And some have accused Russia of using it to gather US intel. But Russia reportedly denied it broke the treaty and called the US's decision "destructive." Now, the US is set to pull out of the deal in six months.

...Oh and add that to the list of things to brief Rep. John Ratcliffe (R-TX) on. He just got the thumbs up to serve as the next director of national intelligence.

Whose cases got an update…

Ahmaud Arbery. Yesterday, Georgia investigators arrested the man who filmed the fatal shooting of the 25-year-old. He's the third person arrested in connection with the case – and is being charged with two crimes, including felony murder. The man, who claims he's just a witness, maintains he had "nothing to do" with the murder. But he was named in the original police report as having allegedly tried to block Arbery's path. Arbery's family – which had repeatedly called for his arrest – said they were "relieved."

Breonna Taylor. Yesterday, the FBI opened an investigation into the death of the 26-year-old EMT. Taylor was killed in her own home in March when police went into the wrong house to pursue a search warrant, according to the family's lawsuit. Now the FBI says it will make sure the "investigation is conducted in a fair, thorough, and impartial manner." This is the latest case involving police brutality toward black Americans.

Who could be missing the milkman, the paperboy, and evening TV...

Lori Loughlin. Today, the actress and her husband are expected to plead guilty to conspiracy charges in the college admissions scandal otherwise known as "Operation Varsity Blues." Reminder: that's when dozens of parents were accused of scheming to get their kids into colleges. Loughlin and her husband were charged with conspiracy and bribery for paying half a million dollars to get their daughters into USC. They face a hefty fine, several months in prison, and hundreds of hours of community service.

What you can say to your Hinge matches…