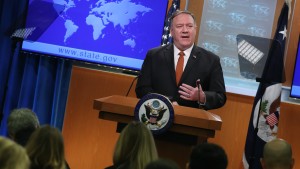 The Trump admin says it no longer considers Hong Kong independent from China.

Yes. But for over a century, it was a British colony. In the '90s, the UK gave the territory back but said it needed to remain semi-autonomous until 2047. China had said 'ok, sure.' And Hong Kong was allowed to keep its own courts, laws, and economy separate from the mainland, as well as maintain separate trade relationships with countries like the US. That hasn't stopped China from trying to tighten its grip on the territory before. Today, China took things to a new level. And now, the Trump admin is saying 'times are changing.'

Today, China's legislature approved a proposal for a new national security law that would let China bypass Hong Kong's local government and crack down on pro-democracy protests there. It passed almost unanimously. Now, Chinese officials will draft the details of the law – a process that could take months. China's legislature says the law is needed to protect national security from protesters it's previously called terrorists. But critics say it's overstepping the territory's independence and overlooks its constitution.

It was expecting the proposal to pass. And as part of US law, Sec of State Mike Pompeo has to notify Congress every year on where the State Department believes Hong Kong's autonomy stands. Yesterday, he said that at this point, "no reasonable person" can say Hong Kong maintains a semi-autonomous status from China. And told Congress it doesn't make sense anymore to give the territory special treatment, like exempting Hong Kong from the billions of dollars in trade tariffs the US has hit China with in recent years. This could open the door to ratchet up trade tensions and jeopardize America's relationship with Hong Kong.

Speaking of tensions...US-China tensions also still remain high due to its trade disputes, and accusations of whether COVID-19 came from a Chinese lab.

This week's moves could further complicate the US's already tumultuous relationship with China. It also puts Hong Kong in the middle of their tensions. And that has some worrying about how the territory and global financial hub could be impacted down the line.

The US. Yesterday, the number of coronavirus-related deaths there surpassed 100,000. It's the highest COVID-19 death toll in the world, killing more Americans than the Korean and Vietnam wars combined. And while the overall US death rate is on a downward trend, at least 13 states are experiencing a spike in cases as the country starts to reopen.

Minneapolis. This week, protests over the death of George Floyd – the unarmed black man who died in police custody – turned violent there. Earlier this week, a video came out showing a police officer with his knee on Floyd's neck for at least seven minutes, as Floyd cried out "I can't breathe." Ever since, thousands of demonstrators have turned out, with some chanting "I can't breathe" and throwing rocks. One man was reportedly shot and killed near the demonstrations and several stores were looted. Police in riot gear tried to disperse crowds by firing tear gas and rubber bullets. The FBI and state officials are investigating Floyd's death. And while four police officers involved in his arrest have already been fired, the city's mayor is calling for one officer – seen in the video holding Floyd down – to be charged.

Social media companies. Yesterday, President Trump threatened to shut them down. He didn't name names, but he's been having a public spat with Twitter. Earlier this week, Twitter said two of Trump's tweets correlating mail-in voting with voter fraud were "potentially misleading." That, after years of Twitter saying 'let him do his thing' and not applying its community policies to tweets critics characterized as inaccurate and harassing. Now, companies like Twitter and Facebook are facing the threat of being "strongly regulated" or even closed down.

Who's giving us all the feels…