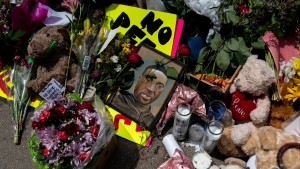 While the US is still battling the coronavirus pandemic, something else is brewing under the surface: the state of racism in the country.

You got that right.

America has long grappled with its racist history. But unlike the 1850s or the 1950s and 60s, the 21st century was supposed to be all about progress. Many minorities say they still experience discrimination and racism. These past few months have exposed that.

Let's start with the coronavirus – which has killed 100,000 Americans since it reached the US in January. Nearly 23% of those reported deaths are black Americans. But black people make up about 13% of the US population. There isn't clear evidence yet to explain why the pandemic is disproportionately affecting people of color. But the CDC says underlying health conditions, income inequality, and lack of access to quality health care could make minorities more susceptible.

When are you getting to George Floyd?

Now. The recent death of Floyd, a 46-year-old Minneapolis man, was caught on video which has gone viral. On Monday, four officers were involved in Floyd's arrest for alleged forgery. One officer pinned him down for at least seven minutes. Floyd signaled many times that he couldn't breathe and later died at the hospital. Thousands of people have taken to the streets of Minneapolis, calling for justice. In recent days, protests turned violent as police fired tear gas at crowds, and demonstrators looted and burned local businesses. The governor called in the National Guard to try to curb the violence. But last night, tensions got worse. Protesters set fire to a police station, which the mayor called "unacceptable." President Trump said these "thugs are dishonoring the memory of George Floyd" and warned that he would "take control" if violence continued.

It's also important to note that Floyd's death was not an isolated incident. This month started off with outrage over the death of 25-year-old Ahmaud Arbery, who was gunned down by a former police officer in Georgia. Then it continued with the death of Breonna Taylor, a 26-year-old EMT who died after police entered her Kentucky home. Last night, protesters gathered in Louisville calling for the arrest of the officers involved in the case. Seven people at the protest were shot, although seemingly not by police. Floyd, Arbery, and Taylor are only a few of a long list of black Americans who've been killed by current or former cops.

Here's how it typically plays out: One study found that from 2005 to 2017, 80 officers were arrested for on-duty fatal shootings. 35% of those charged were convicted. The calls for police reform have been chanted for years now. And some police departments have reportedly pushed for change like adopting body cams. But there's more to be done.

Well, for example, Congress could pass bills requiring officers to wear body cams or prohibiting racial profiling. The Department of Justice could bring back auditing police departments – something it stopped doing in 2017. In the case of Floyd, President Trump says he's instructed the FBI and DOJ to look into his death, which the DOJ says it will make a "top priority."

While Americans have been told to stay home to stay safe, these past few months have reinforced that safety is a luxury that isn't afforded to many black Americans. Now, we are all being called upon to do our part to change that.

Who's not feeling verified…

President Trump. Yesterday, he signed an executive order cracking down on legal protections for social media companies. The move comes after Trump correlated mail-in voting and voter fraud in a tweet – which Twitter flagged as "potentially misleading." Currently, social media companies can choose what content goes on their platforms. But are also protected from being liable for the content posted by its users thanks to a 1996 law. The executive order would allow regulators to argue that social media companies are censoring free speech when they delete users' posts or accounts. And calls on independent agencies, the Justice Department, and states to carry out the new policy. The order is expected to be challenged in court.

What isn't catching a break…

US unemployment. Yesterday, the Labor Department said another 2.1 million Americans filed for unemployment benefits last week. While this signals a downward trend, it's not something to get hopeful about just yet. The total number of unemployed Americans now stands at more than 40 million since mid-March – meaning, 1 in 4 Americans in the workforce is without a job. Some economists believe the country is in a recession, others are expecting a rebound in the second half of the year as restrictions are lifted.

Skimm This: Our latest podcast ep explains what the unemployment numbers mean for you.

When you "live for the applause"…