Daily Skimm: The President's Speech, Updates from Minnesota and Kentucky, and a Pup that Won't Quit 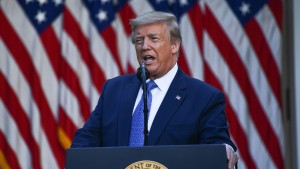 He emphasized the need for "law and order." And urged mayors and governors to call in the National Guard to help end the violence at some of the protests over George Floyd's death. It came just hours after he called on governors to "dominate" violent protesters. The president said he'd deploy the US military to "quickly solve the problem."

Correct. He called the recent wave of violence and vandalism "acts of domestic terror." And said America needs "justice not chaos." He made clear that those who resort to violence will be "arrested, detained and prosecuted." All of that came before a photo op at DC's historic St. John's Church, which had been set on fire amid protests. Officers used tear gas to clear the area for Trump's visit.

Can the president actually deploy the military in the US?

History says so. A 19th century law – called the Posse Comitatus Act – says the military can't be used to act like the police and arrest Americans. But the 1807 Insurrection Act allows Trump to bypass governors to deal with obstruction and civil unrest at home. The act hasn't been invoked since the 1992 Rodney King riots in Los Angeles, which were also over racial inequality and police brutality. This comes as 23 states have already called for the National Guard to help, and dozens of cities have imposed curfews.

The protests continued overnight. And there was more violence. In St Louis, four police officers were struck by gunfire. An officer in Las Vegas was also shot. And at least nine people have reportedly been killed in violence related to the protests.

The country is in crisis. Many Americans have been waiting to hear how the president plans to lead us through it. Now that he's spoken, America remains divided. Some support Trump's message emphasizing a commitment to "law and order." Others are shaken by the potential for further violence as the president threatens to deploy the military against its own people.

Where else there are updates…

Minnesota. Yesterday, a county medical examiner there classified George Floyd's death as a homicide. Preliminary autopsy results said a combination of factors including Floyd's underlying health conditions contributed to his death. But the medical examiner said Floyd had a "cardiopulmonary arrest" while being restrained by police last week outside a grocery store. Floyd's family is calling for a first-degree murder charge against the former Minneapolis officer who pinned his knee on Floyd's neck. Floyd's brother visited his memorial yesterday, pleading for justice and peace.

Kentucky. Yesterday, many gathered in honor of yet another black man killed. David McAtee – a restaurant owner in Louisville – died yesterday after the police and National Guard opened fire when someone in the crowd shot at them. Kentucky's governor called for an investigation into his death. The Louisville police chief was fired after it was revealed the officers involved had not turned on their body cameras.

Who's also taking a stand...

Facebook employees. Yesterday, dozens held a virtual walkout in protest to the company's inaction against some of President Trump's posts. While Twitter has taken to fact-checking the president's tweets over mail-in voting and has blocked another for "glorifying violence" during protests sparked by George Floyd's death, employees say Facebook has done nothing over similar posts on its platform. The company said it's encouraging employees to "speak openly when they disagree with leadership."

...Oh and, the music industry's taking a stand too. Today, record labels and musicians are expected to hit pause on music in solidarity with protesters.

Another Super Tuesday. Today, eight states and Washington, DC, are holding primaries – many of which were rescheduled because of COVID-19. President Trump and former VP Joe Biden are expected to win their primaries. And Biden could also formally get the Democratic nomination after today's voting.

Who found the ulti-mutt way to keep their pet busy…