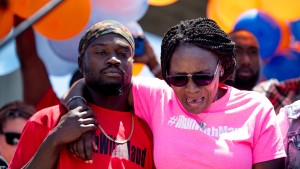 There's a new push for Georgia to implement a hate crime law.

It doesn't have one?

No, and it's not alone. Three other states – Arkansas, South Carolina, and Wyoming – also don't have hate crime laws on the books. Yesterday, Wanda Cooper-Jones – Ahmaud Arbery's mother – released an opinion video with The New York Times urging state lawmakers to pass a hate crime bill. She recounted her son's death in Georgia earlier this year, when he was killed after being chased and shot by a former police officer and his son. The gunman allegedly used a racial slur after shooting Arbery. Cooper-Jones described it as "clearly a hate crime." And while the Justice Dept is investigating whether hate crime laws were violated on the federal level, Cooper-Jones wants action on the state level, too.

So what exactly would a bill do?

Generally, they allow for harsher sentencing or added penalties for anyone convicted of a hate crime – which the FBI defines as a criminal offense motivated by a bias against a race, religion, sexual orientation, gender, or more. In 2004, Georgia's state Supreme Court struck down a hate crime bill for being "unconstitutionally vague." Last year, Georgia lawmakers introduced a bill that could enhance the sentencing for those convicted of targeting a victim in a hate crime.

So what's the holdup?

In part, COVID-19. The state's legislature has been on hiatus because of it. But it's expected to be back in session next week. And lawmakers on both sides of the aisle want it to pass. Dozens of companies have also lined up to support passing a bill. Meanwhile, there are efforts to better address certain hate crimes on the federal level, too.

Last week, Congress was close to passing an anti-lynching bill that would have made the act a federal crime. But one senator – Rand Paul (R-KY) – stalled it. He proposed narrowing how the bill defined lynching. And argued that the bill's definition of lynching was so broad it could lead to someone in a bar fight going to prison for 10 years. Sen. Cory Booker (D-NJ) said Paul's reasoning was "absurd." Sen. Kamala Harris (D-CA) called it "cruel and deliberate obstruction."

Many are in support of hate crime bills. But as states and the federal government move at their own pace, families like Ahmaud Arbery's are left waiting for justice and accountability.

Who used his platform to spread a conspiracy theory...

President Trump. Yesterday, he suggested that a 75-year-old protester who was hospitalized after being pushed by police last week could be "an ANTIFA provocateur." And that the incident – caught on video – may have been part of a "set up." The president gave no evidence for his comments. But he's been quick to blame violence on the far-left group in the past. It's the latest in a series of comments that have earned the president widespread criticism. That includes calling protesters "thugs." And bringing up George Floyd while talking up a May jobs report, saying that he hoped Floyd was "looking down" at the "great thing that's happening" in the US.

Georgia. Yesterday, the state held its primary election and there were big problems – including hourslong lines, issues with voting machines and not enough ballots. Predominantly black communities appeared to be hit the hardest. The head of one civil rights group called it a "catastrophe." Georgia's Republican secretary of state said the issues were "unacceptable" and that he'd investigate them, but many Democrats – including former gubernatorial candidate Stacey Abrams – blamed him for the problems. And many said it was a bad sign for the November election.

George Floyd. Yesterday, hundreds of mourners paid their respects to the 46-year-old father, whose death sparked a nationwide movement against police brutality and systemic racism. "Big Floyd" grew up in Houston, Texas, was a high school football star, and was reportedly the first among his siblings to go to college. He eventually moved to Minneapolis for a fresh start. Family and friends remembered him as a "gentle giant." In a video message at the funeral, presumptive Democratic presidential nominee Joe Biden offered his condolences, saying justice for Floyd would lead to "racial justice in America." Floyd, who cried out for his mother as he was dying at the hands of law enforcement, was buried next to her after a private funeral. RIP.

The WHO. It's walking back the claim earlier this week that asymptomatic spread of the virus is "very rare." The comment went against earlier research and threw into question the org's recommendation that even people who feel fine should wear masks to prevent spread to others. Now the WHO says 'oops nvm' the comment was a "misunderstanding." Instead, it says people with the virus seem to be most infectious when they start feeling symptoms. But that more research is needed before the WHO can say just how infectious people are when they don't have any symptoms at all.

Who's (again) calling for diversity…