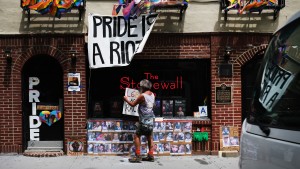 History was made yesterday.

Yesterday, SCOTUS ruled 6-3 that the Civil Rights Act protects LGBTQ+ employees from discrimination. For more than half a century, Title VII of the CRA banned employment discrimination on the basis of "race, color, religion, sex, or national origin." Now, the Supremes say the definition of sex covers gay, bisexual, and transgender workers. Meaning, it's illegal for employers to fire workers on the basis of their LGBTQ+ status.

It was legal before?

More than 25 states had no workplace protections for LGBTQ+ employees. But two cases sparked the ruling: One was brought up by Aimee Stephens, a trans woman who was fired from a Michigan funeral home in 2013 when she told her employer she would begin living openly as a woman. The second concerned lawsuits from Gerald Bostock and Donald Zarda, who said they were fired for being gay. Stephens and Zarda didn't live to see the outcome of their cases. But it was a landmark victory: Justice Neil Gorsuch wrote the majority opinion, joined by Chief Justice John Roberts and the court's four liberal justices.

What about the others?

Justices Clarence Thomas, Samuel A Alito Jr, and Brett Kavanaugh dissented. Critics said the move could affect employers who don't support LGBTQ+ rights because of religious beliefs. President Trump – who earlier this week rolled back Obama-era anti-discrimination protections for trans people – said he read the decision and found it "powerful." But also, that it's a decision people will "live with." Although many were celebrating, the ruling came on the heels of tragic news.

Two Black trans women – Riah Milton and Dominique "Rem'Mie" Fells – were killed last week. In response, thousands of people across the US rallied for Black trans rights over the weekend. Demonstrators pointed out that Black transgender women are especially at risk for violence.

More than 8 million LGBTQ+ workers in the US are now protected by law after SCOTUS's fifth major LGBTQ+ rights case. But there's more work to be done: many are now calling on lawmakers to pass the Equality Act, which would enshrine protections in areas beyond employment, including housing, education, and federal funding.

What the justices will not be taking up...

Qualified immunity. Yesterday, the Supreme Court decided against reviewing the 1982 legal doctrine that protects police officers and gov officials from being sued if they were accused of misconduct. They said 'pass' to at least seven cases involving qualified immunity – on issues ranging from the use of tear gas in a suspect's home to the shooting of a 10-year-old boy during a police pursuit. Justices Clarence Thomas and Sonia Sotomayor have questioned the doctrine, but four votes are needed for the Supremes to review a case. The court didn't provide a reason for why it was passing over the issue. But both Democrats and Republicans are debating qualified immunity in their police reform legislation.

North Korea. Today, the country destroyed an inter-Korean liaison office just north of its border with South Korea. North Korean state media said it was destroyed by a "terrific explosion." It comes after weeks of threats to South Korea from the North. And North Korea's military has also now threatened to move into areas that were demilitarized under earlier peace agreements. North Korea has said it's taking action against its neighbor for allowing activists to send leaflets over the border that are critical of leader Kim Jong Un's government. But analysts believe North Korea is frustrated over the US-led sanctions it's facing. No South Korean workers had been at the office since January, when it was closed because of the coronavirus pandemic.

Where law enforcement is seeing changes...

New York City. Yesterday, the police commissioner there said the department's eliminating its plainclothes anti-crime units. That means reassigning roughly 600 officers that do things like work to get illegal guns off the street. It's also the type of unit that was involved in the 2014 death of Eric Garner, and was a holdover from the department's "stop and frisk" era, which disproportionately targeted Black and Hispanic men. The commissioner says the officers will immediately be given new roles, including in neighborhood policing and the detective bureau.

San Francisco. Last week, the mayor unveiled several reforms for the SFPD, reportedly endorsed by the police chief. Among them, officers would no longer be responding to noncriminal activities like complaints involving homelessness and neighbor disputes. Instead, those cases will be handled by trained, unarmed professionals like those in behavioral health.

The FDA. Yesterday, it withdrew its emergency use authorization issued in March for hydroxychloroquine as a coronavirus treatment. The antimalarial drug – promoted by President Trump – has been controversial among health experts, who've pointed out there's little evidence it helps prevent COVID-19. Now, the FDA's saying that clinical trials show the drug is "unlikely to produce an antiviral effect" against the coronavirus. And that its potential benefits "no longer outweigh" potential risks.

What's not screening as planned…