Daily Skimm: Kentucky, the Latest on Bubba Wallace, and Lawn Upkeep for Justice 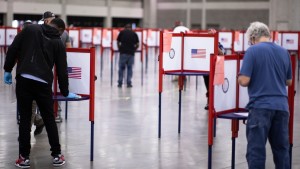 Yesterday, all eyes were on Kentucky.

Section
One of the officers involved in Breonna Taylor's death has officially been fired.

Section
It's been more than three months since the 26-year-old Black woman was shot eight times by officers in her own home.

Despite weeks-long calls for justice and a botched police report, none of the three officers have been charged. Yesterday, the Louisville Metro PD fired detective Brett Hankison for violating procedure by showing "extreme indifference to the value of human life." Still no word on whether he will face charges.

Yeah. But something else also had Kentucky in the spotlight yesterday: primary elections. The number of polling stations was severely reduced to try to curb the spread of COVID-19. During a typical election year, Kentucky has nearly 3,700 stations. Yesterday, it had only 170 – with at least one polling station in each of the state's 120 counties.

Yup. Last week, a judge denied a bipartisan effort to add more voting stations, saying the number of polling places doesn't violate Kentuckians' voting rights. The move sparked concerns of voter suppression among Democrats, celebrities, and some athletes. In Jefferson County – home to the state's largest Black population – there was just one in-person voting location for the nearly 617,000 registered voters. Critics feared this would lead to hours-long lines and frustrated voters, like we saw in Wisconsin and Georgia. Officials said the state was on track to hit a record voter turnout, in part thanks to expanded absentee and early voting. But there were also reports of long lines and people waiting nearly two hours to vote.

Kentucky wasn't the only state that hit the polls yesterday amid the pandemic. But COVID-19 wasn't the only issue. Many worried that restricted in-person voting could disproportionately affect Black residents during a time when many are standing up against systemic racism – in protest and at the ballot box.

This investigation. Yesterday, the FBI concluded that NASCAR driver Bubba Wallace was not the target of a hate crime. The bureau had been looking into a noose discovered this week in Wallace's garage stall at a race track. Now the bureau apparently says the noose was a pull rope that had been in the stall since last October. The FBI also said "nobody could have known" that Wallace and his team would be assigned to that garage. Wallace's team said they are thankful for the "swift and thorough investigation." NASCAR, which had also been looking into the incident, says it will continue its investigation to find out why the rope was tied into a noose in the first place.

What seems to be key to finding out if you have a virus...

Testing. But yesterday, President Trump doubled down on his comments that he wants to slow down COVID-19 testing, saying "I don't kid." Trump blames expanded testing for the uptick in confirmed infections we're seeing across dozens of US states. But Dr. Anthony Fauci – who testified on the Hill yesterday – says 'that's not it.' And that more testing doesn't explain the higher percentage of positive results. He said that in the coming weeks, the US will actually be doing "more testing, not less" to get a handle on outbreaks in states like Florida, Texas, and Arizona.

Who people paid their respects to…

Rayshard Brooks. Yesterday, the 27-year-old Black man shot and killed by police earlier this month was laid to rest at a private funeral service. It took place at Ebenezer Baptist Church in Atlanta, the same church where Rev. Martin Luther King Jr. served as a co-pastor. Brooks was shot twice in the back after an encounter with police at a Wendy's drive-thru, nearly three weeks after George Floyd's death. Brooks's family remembered him as a hard-working father. His friend said he was a "rare, once in a lifetime, individual" whose bright light "will forever change the world."

Who's mowing for justice…