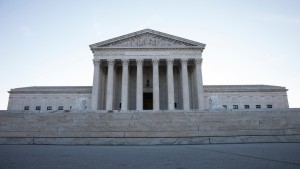 Yesterday, the Supremes struck down a Louisiana law that would have restricted access to abortions. The 2014 law required abortion providers to have admitting privileges at a nearby hospital. Meaning, any doctor performing an abortion at the clinic must have an agreement with a local hospital, allowing them to transfer their patients there in the event of an emergency. The law was briefly implemented before The Center for Reproductive Rights challenged to get it overturned. The case made its way to the high court.

What were the arguments?

Abortion rights advocates said that admitting privileges are hard to get (read: only two doctors in the state were able to obtain them), and that the law would have forced all but one of Louisiana's abortion clinics to close. But the state had argued that the law was meant to keep patients safe and ensure that doctors were competent. Yesterday, SCOTUS gave its final ruling.

In a split 5-4 decision, they ruled that Louisiana's law created an "undue burden" on a woman's constitutional right to end a pregnancy. Chief Justice John Roberts sided with the four liberal justices on the bench, but for a different reason: he argued that precedent from a nearly identical case from 2016 required the Louisiana law to be struck down. The ruling is the high court's first major abortion rights decision since President Trump appointed two conservative judges to the bench.

Anti-abortion advocates called it disappointing. And the White House – which sided with Louisiana – said the court "devalued both the health of mothers and the lives of unborn children." Abortion advocates were relieved but said they're still "concerned about tomorrow" – pointing to at least 16 other cases that could make their way to the Supreme Court. That includes bans on abortions in early pregnancy like the 'heartbeat' bill, and Alabama's near-total ban on abortion.

This ruling is a victory for abortion-rights advocates, but for many, the fight is nowhere near over. And on the other side, some anti-abortion advocates and the Trump admin – who'd hoped a more conservative bench would rule in their favor – are pushing for a "pro-life majority" to return in November.

Why people are watching China...

Hong Kong. Yesterday, it passed a national security law that would let it crack down on the pro-democracy protests there. This law was proposed last month. Under it, people caught engaging in what Beijing characterizes as secession, subversion, terrorism or foreign collusion could face more than a decade in prison. Supporters say the law would make the territory safer for residents. But critics see it as another move by China to tighten its grip on Hong Kong's autonomy.

Uighurs. Chinese authorities have reportedly sterilized hundreds of thousands of Muslim minority women. This is part of a broader campaign to crack down on the minority group. Since 2016, an estimated 1 million or more Uighurs have been detained in "re-education" camps. Now, recent reports found that the government has also subjected them to things like routine pregnancy checks and forced the use of IUDs and abortion. Experts are calling it demographic genocide.

What's ready with the check…

Gilead Sciences. Yesterday, the pharma company announced pricing for its coronavirus treatment, remdesivir. The drug – which the FDA authorized last month for emergency use – could speed up recovery by an average of four days. Now, the company's saying it could cost around $2,000 and $3,000 – though what people pay out of pocket will depend on their insurance. Critics, including lawmakers and health experts, are calling the price outrageous. But Gilead's CEO maintains that it's "well below" the value it brings to patients and hospitals.

This new swine flu strain. A recent study focuses on a new type of flu virus that looks eerily similar to the 2009 swine flu. That virus was a respiratory disease found in pigs that killed thousands, including children. Now, researchers found a similar version in pigs in China that could be passed from animals to humans. And there's evidence it already has – with reportedly two documented human cases. Thankfully, there's no indication (yet) that it could be passed between people. Still, the virus apparently has the "potential" to become a pandemic.