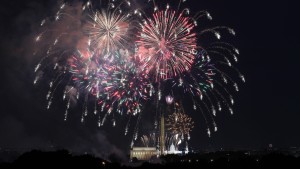 We're Still in a Pandemic

Public health experts called on Americans to keep celebrations small and continue social distancing. They also reminded everyone 'masks on,' even in the heat. Up to 80% of fireworks shows were reportedly canceled to encourage people to stay home. But despite calls for precaution, many Americans still gathered to celebrate. Experts worry the weekend's festivities will add to the more than 2.8 million infections – and nearly 130,000 deaths – across the country.

Nope. In the first four days of July, over a dozen states reportedly saw a record increase in coronavirus cases. Florida and Texas both hit record highs of cases on the Fourth. And Houston's mayor says its hospitals could run out of beds in two weeks. In Arizona, close to a quarter of all tests are coming back positive – reportedly three times the national average. And the state has already reached about 90% capacity for its ICU beds. Meanwhile, VP Mike Pence has called on everyone to wear masks. And governors of at least 20 states have mandated it. But while part of the Trump admin is on board, the president is sending mixed messages.

In a July 4th speech, President Trump claimed that 99% of COVID-19 cases are "totally harmless." FDA Commissioner Dr. Stephen Hahn, a member of the White House coronavirus task force, refused to weigh in. But he did stand behind the CDC stats – which estimate that 35% of cases are asymptomatic. And that people with mild or no symptoms could still spread the virus. Take that as you will.

While many used the holiday weekend to celebrate America's 244th birthday, officials find nothing to celebrate in the US's coronavirus numbers. The fact remains that the pandemic hasn't gone away. And now is not the time to ignore official warnings.

Ghislaine Maxwell. Last week, the FBI arrested convicted sex offender Jeffrey Epstein's former girlfriend and longtime associate at her hideout in New Hampshire. Federal prosecutors had indicted Epstein last July on sex trafficking charges, but he died by suicide in his prison cell a month later. For years, lawsuits have accused Maxwell of helping Epstein run a sex trafficking ring. Now, after being MIA for months, she's facing six charges for recruiting and grooming underage girls for sexual abuse – including as young as 14. The lead prosecutor said Maxwell delivered girls "into the trap that she and Epstein had set for them." But Maxwell has repeatedly denied wrongdoing. She faces up to 35 years in prison if convicted.

Who's looking for answers...

Vanessa Guillen's family. Yesterday, they said army officials identified the 20-year-old soldier's remains. In April, Guillen disappeared from her base at Fort Hood, Texas – soon after telling her family she'd been sexually harassed. For weeks the family demanded answers, accusing the Army of dragging its feet on the investigation. Her story also launched a wave of posts on social media from fellow service members on their experiences with sexual harassment and assault. Last week, the FBI filed a complaint, accusing another soldier – who has since died by suicide – of killing Guillen. Now, it looks like Guillen's remains were found about 30 miles outside of Fort Hood. And the main suspect's girlfriend has been arrested for allegedly helping him dispose of the body. Officials say they haven't found a link between Guillen's death and the alleged harassment. But the family is calling on Congress to investigate.

Broadway actor Nick Cordero. Yesterday, the actor died at the age of 41 after battling coronavirus. He's known for roles in "A Bronx Tale" and "Waitress." Cordero had been hospitalized for months and his wife Amanda Kloots shared his journey on social media. Following his death, she thanked all the people who had sung his song "Live Your Life" every day at 3pm in a show of support. RIP.

Ennio Morricone. Today, the Oscar-winning Italian composer died at the age of 91 after a recent fall where he broke his leg. Morricone is best known for composing for spaghetti Westerns, writing the theme to "The Good, The Bad and the Ugly." He wrote scores for more than 400 movies, including "The Untouchables," "Once Upon a Time in America," and "The Hateful Eight." He won an Oscar for lifetime achievement in 2007. RIP.

The Washington Redskins and Cleveland Indians. After national calls for social justice, both teams said they were considering changing their names – which many have called offensive to Native Americans.

Who gave Americans a history lesson this Fourth…