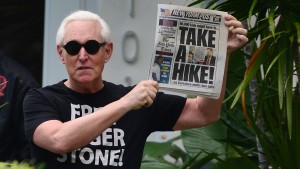 ‘Get Out of Jail Free’ Card

Remind me who he is.

A Republican strategist and longtime adviser to Trump. Last year, a federal jury convicted Stone of seven felonies including lying to Congress, obstructing its investigation into election interference, and witness tampering. Jurors found that Stone lied about pursuing the release of damaging info on Hillary Clinton (remember her emails?) via WikiLeaks. And that he threatened a witness to cover up for him. Prosecutors said he did it because the truth would have "looked terrible" for Trump and his campaign. Stone was supposed to report to prison tomorrow for a 40-month sentence. But last week, Trump used his executive power to erase his friend's sentence.

For months, Trump has called Stone the victim of a "witch hunt" and has talked about pardoning him. In a statement, the White House maintained that argument, saying the president erased Stone's sentence as a result of his "unfair prosecution, arrest, and trial." Lawmakers from both sides of the aisle condemned the move. Sen. Mitt Romney (R-UT) said it was "unprecedented, historic corruption." Former special counsel Robert Mueller – whose investigation led to the charges against Stone – made rare public comments in an op-ed, saying Stone "remains a convicted felon, and rightly so." But some Republican lawmakers supported Trump. Sen. Lindsey Graham (R-SC) had said the decision would be "justified" because Stone was a "nonviolent, first-time" offender.

So, can Trump do this?

Technically, yes. Under the Constitution, presidents have the power to grant clemency (aka pardoning or commuting a person's sentence). FYI: Commutations can lift a felon's sentence but not their conviction. And pardons entirely forgive or excuse a federal crime. All petitions for Executive Clemency must be brought up to the admin's pardon office, which makes recommendations on the cases. Right now, the Justice Dept says about 13,500 people are waiting to hear if Trump will approve their requests for clemency. So far, he's granted it to 36 people. That's a lot less than some other recent presidents. And some people who did get clemency had connections to Trump or people he knows. Which had some critics calling the move an abuse of the rule of law.

President Trump has hailed himself as the president of "law and order." But this latest move has some scratching their heads, wondering if his friends are getting preferential treatment.

What's still very much a problem...

COVID-19. Yesterday, Florida reported more than 15,000 new cases of the coronavirus – the highest daily record of any state since the pandemic began. The surge comes as hospitalizations have skyrocketed and dozens of hospitals have maxed out their ICU capacity. Despite all of this, Disney World in Orlando reopened this past weekend. And Florida Gov. Ron DeSantis (R) has refused to mandate masks across the state, saying it's up to localities to decide. Meanwhile, the US still has the most known coronavirus cases in the world – more than 3.3 million – and over 134,000 deaths.

...Oh and speaking of the virus, Surgeon General Jerome Adams has changed course and is now urging people to wear masks.

Who checked some boxes…

Polish citizens. Today, Poland's electoral commission said incumbent President Andrzej Duda won a second term against the centrist Mayor of Warsaw Rafał Trzaskowski in the country's runoff election. After nearly all the votes were counted, Duda won a little more than 51% of the votes amid record turnout. Last month, Poland was the first EU country to hold a presidential election since the pandemic began. But neither candidate – Duda nor Trzaskowski – reached a majority, sparking yesterday's election. Duda has run on a conservative platform and faced criticism for anti-LGBTQ+ and anti-Semitic remarks during the campaign. Trzaskowski is a centrist and is pushing for closer ties to the EU. The official announcement is expected later today.

Kelly Preston. Yesterday, the actress passed away after a two-year battle with breast cancer. She was 57. Preston is best known for her roles in "Jerry Maguire," "Twins" and "Mischief." Her husband John Travolta confirmed her death in an Instagram post early this morning. The two had celebrated their 28th wedding anniversary last year and lost their oldest son, Jett, in 2009. Travolta said her "love and life will always be remembered" and thanked all the doctors and nurses for their care. RIP.

Who's causing an uproar…

Turkish President Recep Tayyip Erdoğan. Last week, he ordered Hagia Sophia to be turned into a mosque minutes after a Turkish court revoked its status as a museum. The centuries-old structure was an Orthodox Christian cathedral and became a mosque under Ottoman rule. But in 1934 it was turned into a museum, becoming a symbol of secularism in Turkey where the Islamic and Christian faiths can coexist. Now some say Erdoğan's decision could destabilize religious peace within the country. Erdoğan says the move is part of Turkey's sovereign right, but that shouldn't stop people from visiting it.

Who may need more candles on their birthday cake...

The US Naval Academy graduate is poised to become the first Black female tactical fighter pilot. Last week, a Navy official said she completed the tactical air training program. Swegle is currently assigned to an air station in Texas. And will receive her Wings of Gold later this month. Swegle's accomplishment comes nearly 50 years after the first woman in the Navy flew a tactical jet.