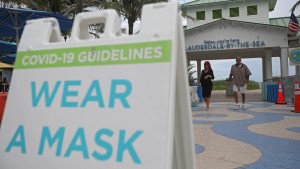 The US is making changes to its coronavirus response as new cases spike.

Data collection. Yesterday, hospitals across the country started reporting their data directly to the Department of Health and Human Services (HHS), instead of to the CDC (which falls under HHS). That includes everything from the number of COVID-19 hospitalizations to available beds to PPE. Given the Trump admin's recent attacks on the CDC (see: this and this), many were alarmed about the news. And worried the nation's top health agency was getting sidelined.

Is that the case?

Apparently not. While the CDC has collected that info since the beginning of the pandemic, officials say the system was inadequate and outdated. The admin also said the CDC only collected data from 85% of hospitals, and had a week-long lag in reporting. So it's trying to streamline the data collection, on the orders of HHS Secretary Alex Azar and Dr. Deborah Birx – the WH coronavirus response coordinator. The CDC also approved the changes.

So all's well that ends well?

Time will tell. The new system is meant to be much faster and requires data from 100% of hospitals. HHS officials believe it will help the country "defeat the coronavirus." But some public health experts worry about making changes in the middle of a pandemic. Doctors say it'll be more work for overwhelmed hospitals. And experts are concerned it'll be more difficult for the public to see this data. But HHS officials reportedly said they're working on the "best way" to make the info public. And while things are shifting on the government end, some businesses are making changes of their own.

Walmart. Yesterday, the US's largest retailer announced shoppers will be required to wear masks in all of its 5,000+ stores starting next week – regardless of state laws. It's the largest company to mandate face coverings, but not the first.

For weeks, the Trump admin has criticized the CDC over things like testing and its guidelines on reopening schools. Now, as the US has reached more than 60,000 new COVID-19 infections per day, it appears the admin is shifting some of the agency's responsibilities to try to improve the response to the pandemic.

The Supreme Court. This morning, it cleared the way for the federal gov's second execution this week after a 17-year hiatus. A federal judge had halted the execution of a 68-year-old Wesley Ira Purkey, who was sentenced to death for the 1998 kidnapping and murder of a 16-year-old Missouri girl. Purkey was scheduled to be executed by lethal injection yesterday, but a judge ordered an evaluation of his mental competency. Purkey's lawyers said he suffers from dementia and severe mental illness. And may not understand why he is being executed – arguing it makes the execution unconstitutional. The DOJ had appealed the ruling and it made its way to the Supremes, who sided with the DOJ. It is not clear exactly when Purkey would receive the lethal injection but could be as early as today.

President Trump. Yesterday, he announced the rollback of a landmark environmental protection law. The National Environmental Policy Act (NEPA) requires federal agencies to review the environmental effects of potential infrastructure projects. But the oil and gas industry had long complained it takes too long, and Trump claimed "mountains and mountains of red tape" had held up important projects. Now, the admin's limiting the reviews to speed up the permit process for things like highways, power plants, and pipelines. Environmentalists condemned the move, saying it'll disproportionately affect poor and minority communities who live in areas with higher pollution. They plan to challenge the decision in court.

What's saying 'you can't take a bite out of this'…

Apple. Yesterday, the EU's second-highest court overruled a decision that the tech giant owed nearly $15 billion in back taxes to Ireland. In 2016, the European Commission said the Irish gov had given Apple an unfair advantage by allowing it to pay "substantially less tax" than other companies. And ordered Apple to pay up. But yesterday, a judge said the European Commission didn't prove its case. Apple and Ireland applauded the ruling, saying they followed "normal Irish taxation rules." The commission can appeal.

...Oh and speaking of the European Commission, today it struck down an EU-US agreement that let tech companies transfer data outside of the bloc. And said the agreement went against European privacy rights.

The NAACP and CBS. Yesterday, the civil rights org and TV studio announced a multi-year partnership to create scripted, unscripted, and documentary content focused around Black artists and their stories.

Who's 'America's Next Top Host'…