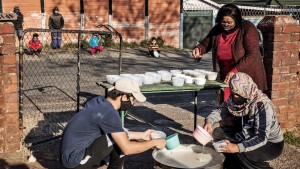 COVID-19 is disrupting the global food supply. And the UN is urging action.

Every year, around 9 million people worldwide reportedly die of hunger. It's a figure that can be attributed in part to political instability and climate change. Months ago, the UN rang the alarm, warning that the coronavirus pandemic could worsen food insecurity. Now, that's exactly what we're seeing.

Virus-related restrictions – on things like travel and big gatherings – have made it harder for farmers to sell food at markets. And for critical food and aid supplies to reach communities. The result is a major increase in the number of kids suffering from malnutrition all over the world – from Latin America to sub-Saharan Africa to the Middle East. And the UN said it's leading to an estimated 10,000 more child deaths per month.

The UN is calling for at least $2.4 billion, immediately. The money would go through four of its agencies – the World Health Organization, UNICEF, the World Food Programme, and the Food and Agriculture Organization. But some say that's not enough. The head of UNICEF's nutrition program reportedly said some restrictions on movement also need to be eased so people can get access to food and medical treatment.

This virus – and how governments respond to it – doesn't impact people equally. Countries already suffering from high rates of poverty, violence, and instability (like Yemen and Venezuela) are seeing their food crises get worse. And children are especially at risk.

Who has Capitol Hill's attention…

AG William Barr. Yesterday, he testified before the House Judiciary Committee. On the Democrats' radar: the Justice Dept's response to protests against racism and police brutality. Barr defended the decision to send federal agents to Portland, blaming "violent rioters and anarchists" for wreaking havoc. He also warned against defunding the police, calling it "extremely dangerous." And he was asked about Russia – and the choice to request a reduced sentence for President Trump's longtime adviser Roger Stone. Barr said he only intervened because the original sentence was excessive.

Tech CEOs. Today, the heads of Amazon, Apple, Facebook, and Google are testifying (virtually) before the House Judiciary Committee's subcommittee on antitrust. Congress is wondering out loud whether these big AF companies are too big to let others compete. And whether there needs to be legislation to address that. Each company's pushed back on antitrust claims and some have said they do have competition in the world: from China. TBD if Congress buys it.

DACA. Yesterday, the Trump admin announced it won't accept new applicants to the Obama-era program that protects over 640,000 young undocumented immigrants from deportation. And Dreamers who are already enrolled can only renew their protections for one year – instead of the usual two. The Trump admin has been trying to end DACA since 2017, arguing that Obama officials overstepped when they created the program. But last month, the Supreme Court said 'not so fast.' Now, the Trump admin says the program's under review. Critics are saying they're ready to head to court...again.

The New York Police Department. Yesterday, it confirmed that officers in plain clothes arrested a protester and placed her in an unmarked van. The announcement came after a video of the incident surfaced and spread over social media. Now, the police department said it was because the woman allegedly damaged cameras at City Hall Park. The move drew sharp criticism with some saying the move was eerily similar to what's happening in Portland, OR, and from Rep. Alexandria Ocasio-Cortez (D-NY), who said Americans' "civil liberties are on the brink."

The Television Academy. Emmy noms are in: "Watchmen" is a must-watch. Mrs. Maisel is still marvelous. "The Crown" is in the running for more gold. Oh, and Brad Pitt got a nom for playing Dr. Anthony Fauci. The biggest takeaway: Netflix doesn't need to chill since it got the most nominations. Guess that answers the question 'are you still watching?' Next up: one of the Jimmys (Kimmel) is hosting on September 20.

Skimm More: You know you don't wanna miss Watch(men)ing the Emmys in September. Our app syncs your calendar with ours so you never miss major events. Download it now and start your free trial.

The Miami Marlins. Yesterday, MLB announced it's suspending the team's season through at least Sunday after 15 players and two coaches tested positive for COVID-19. For now, the Marlins will take daily tests and stay in Philadelphia, where they played their last game.

Who's getting in his (positive) feelings...