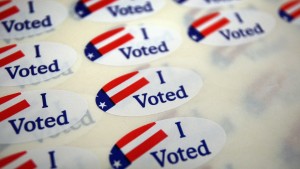 Election Day is still on for November 3rd.

Great, put it in your cal. Yesterday, President Trump caused a stir when he floated delaying it. His reason: states are considering expanding mail-in voting options to provide Americans with a variety of ways to vote safely during the coronavirus pandemic. But Trump isn't a fan. He said the trend will lead to "the most inaccurate and fraudulent election in history."

So is this: One recent study also found mail-in voting doesn't benefit one party over another. It's worth noting: Trump didn't imply that he personally would delay the election – legally he can't do that (only Congress can). But many on both sides of the aisle pushed back at the suggestion anyway. And some noted the US has never before delayed a federal election – even through wars and the Great Depression.

So nothing to do until November?

Not exactly. Every state has its own deadline for when you need to request an absentee or mail-in ballot...if those options are even available. And with more mail-in voting options this year, the US Postal Service is encouraging voters to plan ahead. If you wait until the last minute to decide how to vote, you could be cutting it close. We're now less than 100 days away from the election – time to make a game plan.

Over 180 million Americans will reportedly have the opportunity to mail in their ballots this fall. This produces real challenges for postal workers and election officials as they work to ensure all votes are counted. But it's also an opportunity to expand voting accessibility and enable Americans to safely exercise their right to vote. Make sure you're all set.

Skimm More: Election Day's less than 100 days away. Everything you need to get ready – from checking your registration, to registration deadlines, and voter ID requirements is here.

What has economists scrambling…

The US economy. Yesterday, the Commerce Department said the GDP (the value of goods and services produced in a certain time frame) shrank 9.5% in the second quarter of 2020 – the greatest drop ever. Analysts are pointing the finger at COVID-19 and things like stay-at-home orders and concerns over safety shuttering businesses and slowing the economy. There was some good news: personal income was much higher, in part thanks to federal stimulus checks. But the Fed chair is saying the US can't recover from the economic fall until the pandemic is under control.

What has an update…

The Michael Brown case. Yesterday, St.Louis County's prosecutor said former officer Darren Wilson would not be charged for killing the 18-year-old Black man in Ferguson, Missouri, in 2014. This is the third investigation into Brown's death, and the third time Wilson left without charges. Brown's family had hoped the county's first Black prosecutor would look at the case differently, but this latest investigation could not determine "beyond a reasonable doubt" that Wilson committed murder or manslaughter. The county prosecutor said his heart "breaks" for Brown's parents and that the investigation "does not exonerate" former officer Wilson.

Ghislaine Maxwell. Yesterday, a US court released documents from a lawsuit against Maxwell – the former girlfriend and longtime associate of convicted sex offender Jeffrey Epstein. They include a deposition from one of Epstein's accusers – Virginia Giuffre. And emails between Maxwell and Epstein from 2015. Some documents from the case – including transcripts of a deposition with Maxwell herself – are still sealed. Maxwell is currently facing federal charges of recruiting and grooming underage girls for sexual abuse. She's pleaded not guilty.

Herman Cain. The business executive and former Republican presidential candidate has died of complications from COVID-19. He was 74. Cain – a cancer survivor – had attended President Trump's indoor rally in Tulsa, OK, on June 20 and was diagnosed with the virus a little over a week later. It's not clear where he contracted the virus. In the 2012 election, Cain called himself an ABC candidate (American Black Conservative) and pitched a simplified tax plan for businesses, personal income, and sales. He dropped out of the race after he was accused of sexual misconduct, which he denied. Trump honored Cain's life and called him "an American Patriot and great friend." RIP.

Whose legacy will be remembered...

John Lewis'. Yesterday, former Presidents Barack Obama, George W Bush, and Bill Clinton paid their respects to the late congressman and civil rights icon. Obama gave the eulogy before Lewis' body was laid to rest in Atlanta, GA. He called on Americans to expand voting rights, saying it would honor Lewis by "revitalizing the law that he was willing to die for." And drew comparisons between the civil rights movement Lewis helped lead in the 1960s and the current protests for racial justice happening across the US. Before his death, Lewis wrote an op-ed encouraging this generation to be the one "who laid down the heavy burdens of hate at last" so that peace could finally triumph.

Who's stepping aside to demand justice...

Oprah. For the first time ever, her magazine will not have her on the cover. Instead, the September issue showcases Breonna Taylor, the 26-year-old EMT fatally shot at home by Louisville police. It has been 140 days since her death and no one has been prosecuted.

When NASA's launching to Mars...