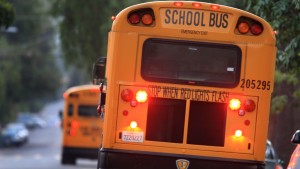 Teachers are protesting. Some parents are panicking. And there are no clear federal guidelines on what to do when a student tests positive. Welcome to Back to School 2020.

Neither can state, city, and local officials who are struggling to figure out if, when, or how to reopen schools right now. Back in March, schools around the country were forced to close as the US began to report thousands of cases and the WHO officially declared COVID-19 a pandemic. Now, nearly five months later, cases in the US hover around 4.7 million and more than 154,000 people have died. And reopening schools is a hot topic of debate.

Dr. Anthony Fauci and the CDC are encouraging some schools to reopen, while emphasizing the need to put safety first. They stressed the importance of schools for students' development and for parents – particularly those working low-income jobs – to have much-needed childcare. But the health agency has yet to spell out what to do if students test positive. A big problem for already underfunded public schools, where large class sizes and lack of resources (like substitute teachers, nurses, or even hand sanitizer) could increase the risk of infection.

No one knows. And some teachers are fed up. Staff from school districts nationwide are protesting against what they worry are unsafe reopening plans. Especially as cases continue to soar in parts of the US and schools that have reopened have already seen their first infections. And some are wondering how schools are supposed to fare if a multi-billion-dollar industry like the MLB is unable to avoid outbreaks despite a plethora of resources, strict restrictions, and mandatory testing for its players.

Some research suggests remote learning disproportionately harms minority and low-income students. And could be pushing some women out of the workforce. While students and parents may be eager for schools to reopen, the dangers of possible new infections are palpable. And there's still no cheat sheet on how to avoid mistakes.

Whose lawyers could be working overtime...

President Trump's. Yesterday, Manhattan's district attorney suggested he was investigating Trump and his company for possible bank and insurance fraud. And that he's asked a federal judge to throw out Trump's lawsuit protecting his personal and corporate tax returns. This comes a month after SCOTUS ruled that the DA's prosecutors could pursue Trump's financial records because not even a president is above a criminal investigation. Reminder: the Manhattan DA was already seeking Trump's financial records as part of an investigation into alleged hush-money payments. Now, the investigation could be a broader probe into the Trump Organization's dealings of potential "criminal conduct." But Trump called the investigation a continued witch hunt that has "gone on long enough."

Hurricane Isaias. Yesterday, the Category 1 hurricane touched down in North Carolina with winds reaching up to 85 mph. Hundreds of thousands of people were without power and over 3,000 have evacuated in recent days. The state's governor encouraged people to stay with friends or family in safe areas to avoid shelters from getting overcrowded amid coronavirus social distancing restrictions. This morning, the hurricane was downgraded back to a tropical storm with winds reaching up to 70 mph, but could still be life-threatening. And has the potential to bring down trees and power lines. Isaias is expected to make its way through the East Coast today and tomorrow.

What's giving a jolt to the science world...

This. Researchers in Singapore have developed artificial skin that recreates a sense of touch. The tech is still in the experimental stages but the hope is that it'll help people with prosthetic limbs feel things like temperature and texture. And to that end, researchers took a page out of Luke Skywalker's experience in "Star Wars." They came up with a material made up of electronic sensors they say can reportedly process info faster than the human nervous system.

When life gives you JPJ...