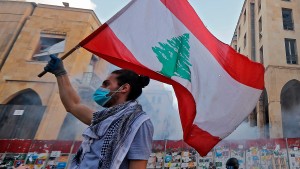 Lebanon's government is on its way out.

Yesterday, Prime Minister Hassan Diab and his cabinet resigned amid anti-gov protests. The country's been reeling from widespread government corruption and an economic crisis. It's dealing with high unemployment, soaring inflation, and growing poverty rates. And, just like the rest of the world, its issues have been exacerbated by the COVID-19 pandemic. But protests have swelled after last week's deadly explosion. In his resignation speech, Diab said he joins the Lebanese people in their calls for change. And blamed corrupt politicians who preceded him for the "earthquake" that has hit Lebanon.

While protesters were calling for early elections, it's not clear if that will happen. The country's political parties could choose a new PM and cabinet. This is the second time in less than a year that Lebanon's PM has stepped down. And some are calling out its power-sharing structure – distributed between Christians, Shiites, and Sunnis – for contributing to the country's instability. An issue that could continue if no drastic changes are made.

I see. And any updates on the blast?

It's still under investigation. At least 160 people have died and thousands more were injured. Many still blame the gov – which has arrested at least 20 people. While the country's top judicial body has taken over the investigation, some are calling on the international community to get involved. Meanwhile, French President Emmanuel Macron helped raise nearly $300 million to provide aid to Lebanon at an international donors' conference.

The Beirut blast seems to have amplified the existing problems within Lebanon and its gov. But it's not clear if this latest shuffle will bring more political instability or if the rulebook will keep things as they are.

Russia. Today, Russian President Vladimir Putin said the country has become the first to approve a coronavirus vaccine for use. And that the vaccine – developed by the Gamaleya Institute in Moscow – has proven to be efficient, adding that one of his daughters has taken it. But the vaccine has yet to enter Phase 3 trials – the final stage of testing that can take months and involves thousands of people. Some public health experts have raised alarms about making a vaccine available before it's ready with Dr. Anthony Fauci saying it's "problematic at best." There are currently more than 160 vaccines in development around the world. The news comes as the number of confirmed COVID-19 cases worldwide topped 20 million.

This report. The American Academy of Pediatrics and the Children's Hospital Association found that more than 97,000 US children tested positive for COVID-19 in the last two weeks of July. The findings – using data from 49 states – come as some school districts across the country reopen to students, teachers, and staff. And as others have been forced to return to online learning after seeing new cases during the first week back.

Chicago. Earlier this week, hundreds of people took to the streets of downtown Chicago hours after a shooting – where police had returned fire after a man shot at officers. Authorities believe false reports on social media about the shooting led to hundreds of people descending onto Chicago's shopping district. More than 100 people were arrested after some smashed windows, ran off with merchandise, and clashed with officers – 13 of whom were injured. Mayor Lori Lightfoot called it "an assault" on the city and said surveillance video would be reviewed to arrest those involved in the vandalism. Access to the Windy City's downtown area is now restricted until further notice.

Puerto Rico. Over the weekend, the island partially suspended its primary elections after a shortage of voting ballots at dozens of precincts. Gov. Wanda Vázquez Garced called the elections commission's actions "totally unacceptable and outrageous" and many are calling on its president to resign. Now, voters who didn't get a chance to cast their ballot including for governor and mayor may get another chance to do so on Sunday – but it could be up to the island's Supreme Court.

Who'll make you a night owl...