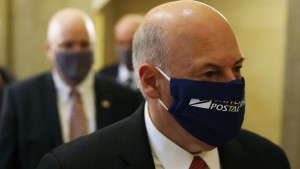 The US Postal Service is suspending its controversial changes.

For weeks, the USPS has faced scrutiny after newly appointed Postmaster General Louis DeJoy shook things up. Think: cutting overtime and reducing post office hours. The changes were supposed to help the agency – which is billions of dollars in debt – save money. But they've led to backlogs of mail and delivery delays. Which had many concerned about voter disenfranchisement since millions of Americans could choose to vote by mail in November. Both the House and Senate put some time on DeJoy's cal. And at least 20 states threatened to sue. Now DeJoy's hitting pause on the changes "to avoid even the appearance of any impact on election mail."

The Postal Service will allow overtime to process mail, which could help with the backlogs. It won't change retail hours or close any mail-sorting facilities. And plans to remove blue collection mailboxes and mail-sorting machines – something USPS says is routine but heightened concerns about its ability to handle election mail – are also on hold. But only until after the November election.

It's unclear. The House plans to vote on a bill this weekend to grant the Postal Service $25 billion in funding – which could help its daily operations. And DeJoy will face questions from a Senate committee (including Sen. Kamala Harris) on Friday and a House committee on Monday. Meanwhile, several states still plan to move forward with their lawsuits against the USPS, arguing that it should've gotten approval before making the changes.

Americans and lawmakers have delivered a strong message to the Postal Service. But while the agency has changed course for now, it's still up to people to prepare to cast their ballots amid some barriers to voting – both new and old.

Skimm More: We've got you covered on ways to take action, get informed, spread the word, and help get your communities ready to vote in the upcoming election.

The DNC. Yesterday, Democrats officially nominated Joe Biden as their presidential nominee after a roll call vote from across the country. Also on night two of the convention: 17 "rising stars" in the Dem party – including former GA gubernatorial candidate Stacey Abrams – gave the keynote. Former President Bill Clinton criticized the Trump admin's response to the COVID-19 pandemic, calling it "chaos." AOC gave a shout-out to Biden's rival-turned-supporter, Sen. Bernie Sanders (I-VT). Another special guest? Dr. Jill Biden, who was back in school. She talked about the family's personal tragedies and said her husband would make the US "whole." Up tonight: Former President Barack Obama and 2016 nominee Hillary Clinton. And Sen. Kamala Harris (D-CA) will officially accept the VP nomination.

Mali. Yesterday, President Ibrahim Boubacar Keïta resigned and dissolved parliament hours after rebellious soldiers arrested him and the country's prime minister. Keïta had led Mali for seven years but has been criticized as the West African country deals with an Islamist insurgency, economic woes, and COVID-19. And protesters have pushed for Keïta to resign for weeks. He said he would step down because he didn't want "blood to be shed" to keep him in power. But it's unclear what will happen next – and who will be in charge. Officials from the US, France, and the UN all condemned the soldiers' actions. And the EU warned it could destabilize "not only Mali, but the whole region."

Susan B Anthony. Yesterday, President Trump pardoned the women's suffrage leader – who was arrested in 1872 for voting as a woman and fined $100 (which she never paid). Trump said Anthony should have been pardoned long ago and chose a special day to do it: the 100th anniversary of the 19th Amendment – which granted women the right to vote in the US. But critics said her arrest helped draw attention to the movement, and that pardoning her would defeat its purpose.

Who's asking for a change...

Where you'll want to be for the holidays...

Where it snows chocolate.