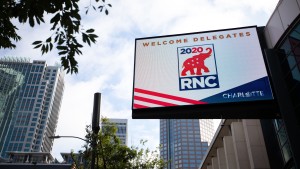 The Republican National Convention is here and President Trump has the mic.

Similar to last week's DNC, it'll mostly be virtual. But some events will take place in Charlotte, North Carolina – the convention's originally planned location. President Trump is set to speak every night (along with several of his children). Here's what else is happening:

On Monday...more than 300 delegates will meet in Charlotte to have their roll call vote and formally renominate Trump and VP Mike Pence for the Republican Party's presidential ticket. Also in the lineup: some of the rising stars of the GOP, including Sen. Tim Scott (R-SC) and former Ambassador to the UN Nikki Haley. Plus Mark and Patricia McCloskey – the couple who came out with guns to fend off Black Lives Matter protesters outside their Missouri home.

On Tuesday...Americans might hear an original speech from first lady Melania Trump from the new White House Rose Garden. And from Nick Sandmann, the former Covington Catholic high schooler whose incident with a Native American activist went viral last year.

On Wednesday...VP Mike Pence gets to speak. So does second lady Karen Pence.

On Thursday...all eyes will be on the president. Trump is expected to officially accept his nomination from the White House. But the location had some wondering whether it violated the Hatch Act (a law that restricts federal employees from engaging in certain political activities).

What are they going to talk about?

The overall theme is "Honoring the Great American Story." Republicans will focus on Trump's accomplishments over the last four years (think: appointing two conservative SCOTUS justices, working to bring troops home from Afghanistan and Iraq). And they're planning to hype up Trump's second-term vision board, which includes creating millions of jobs, prepping for future pandemics, cutting prescription drug costs, and funding a larger police force.

The convention is going down between 8:30pm to 11pm ET tonight through Thursday. You can watch live streams on platforms like Facebook, YouTube, and Twitter. Or you can tune in to major broadcast networks.

The stakes for Trump are high amid the COVID-19 pandemic. And his base and the Republican Party has, for the most part, rallied behind him during his time in office. This week, they'll be making the case that he deserves another four years to "Keep America Great."

Who's saying 'may I have your attention, please'…

President Trump. Yesterday, he announced the FDA's 'stamp of approval' for using convalescent plasma to treat COVID-19. Convalescent plasma is taken from the blood of people who've recovered from the coronavirus – making it rich in antibodies that may help fight off the virus. The same method has been used to treat the flu and Ebola, and more than 70,000 American patients with COVID-19 have been treated with it. But the FDA had reportedly held off on designating it as a treatment after federal health officials said there isn't enough proof that it helps people recover from the coronavirus.

Kellyanne Conway. Yesterday, President Trump's senior advisor and longest-serving aide announced she's leaving her role at the end of the month. Conway became the first woman to manage a successful presidential campaign. Now, she says she's stepping down from her WH role to focus on her family. It's unclear who will replace her.

Kenosha, WI. Yesterday, police there shot a Black man multiple times, leading to hundreds of people protesting in the city. Video that purportedly shows the incident was posted on social media. It shows an officer shooting the man several times in the back as he tries to get into a vehicle. Wisconsin Gov. Tony Evers (D) identified the man as Jacob Blake and said "he is not the first Black man or person to have been shot or injured or mercilessly killed at the hands of individuals in law enforcement." Blake was hospitalized in serious condition and the Wisconsin Department of Justice is investigating. After the shooting, hundreds of people took to the streets to protest and some vehicles were damaged. Officers used tear gas to break up the crowds and a citywide curfew was put in place until 7am.

What's got people on alert…

California. Thousands of firefighters are working to contain wildfires that have burned over 1 million acres in Northern California and killed at least five people. Over the past week, about 12,000 lightning strikes ignited hundreds of fires across the state – including the second- and third-largest fires in the state's history. Now, people are worried about a new round of thunderstorms that could spark new blazes in the coming days.

Marco and Laura. The Gulf Coast is bracing for a possible "one-two punch" as two hurricanes could make landfall within days of each other. Hurricane Marco is expected to hit the Louisiana coast today. And Laura – currently a tropical storm – is expected later this week. Officials are warning residents from Texas to Alabama about life-threatening winds and flooding along the coast.

The House. Over the weekend, it passed a bill to give the US Postal Service $25 billion. And to block operational changes that Democrats say could affect mail-in voting in the November election. The White House has already threatened to veto the bill, which isn't expected to pass the Senate. It comes amid controversy with the USPS as delivery delays have stoked fears of voter disenfranchisement ahead of the November election. Postmaster General Louis DeJoy has said he'll stop the operational changes he made to save the agency money. But that hasn't stopped lawmakers from wanting to chat with him. He's expected to testify in front of a House committee today.

Skimm More: Here's your explainer on what's going on with the USPS.

Who's learned their fate...

The Golden State Killer. Last week, Joseph DeAngelo was sentenced to life in prison without parole for 13 counts of murder and multiple rapes – committed in California in the '70s and '80s. He was the subject of the 2018 book "I'll Be Gone In The Dark," which came out just two months before he was arrested. The Sacramento County DA told the survivors that their attacker is "gone forever and will die alone in the dark."