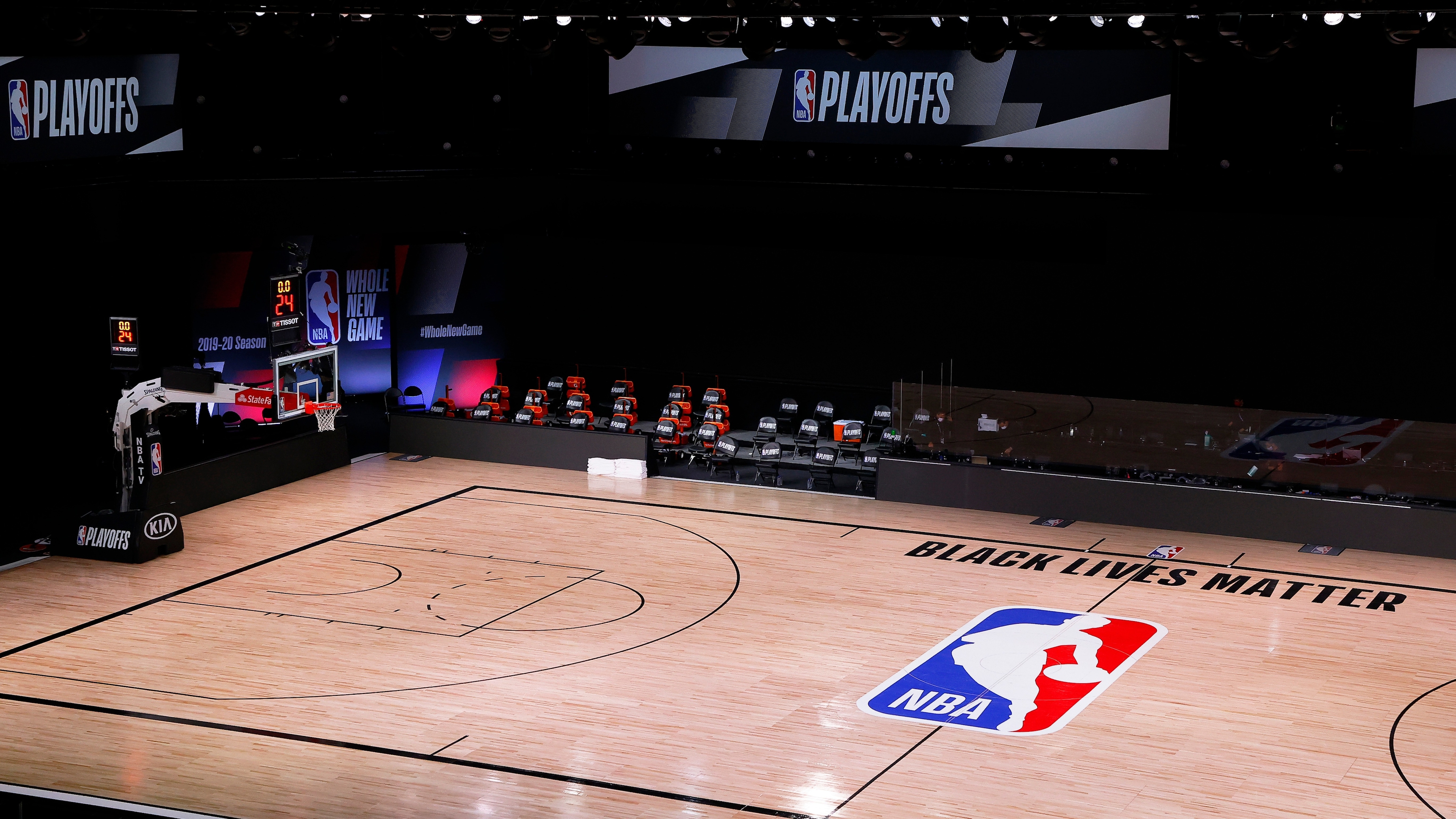 Major sports leagues are throwing their weight behind the fight for racial justice.

Yesterday, the Milwaukee Bucks boycotted an NBA playoff game in protest of the police shooting of Jacob Blake – which occurred in their home state, and is now under a federal civil rights investigation. Earlier this week, Blake (who was reportedly trying to break up a fight) was shot in the back seven times by an officer later identified as Rusten Sheskey in Kenosha, WI. Investigators said officers tried using a taser first, but it failed. Now, Blake is in the hospital, paralyzed from the waist down. Cellphone video of the shooting was released and reignited protests across the country calling for justice, respect, equality, humanity, agency (the list goes on) for Black lives.

So the Bucks said 'enough'?

Yep. Yesterday, they were scheduled to play Game 5 in the playoffs against the Orlando Magic. But they never came out on the court. Instead, they called for justice, demanded that the "officers be held accountable," and denounced Wisconsin lawmakers for "months of inaction" on police reform. The team's owners said they weren't aware of the boycott beforehand, but supported the decision. Then the momentum spread. The NBA and the National Basketball Players Association postponed all other playoff games scheduled yesterday. Then other leagues took notice. The WNBA and some MLB teams joined in the boycott – sitting out their games in solidarity and calling for change.

You may. But activism in the leagues is not new. To date, the NBA and WNBA have been more supportive of its players taking part. (See: the WNBA working with players to dedicate this season to social justice.) Then...there's the NFL – which was vocally against Colin Kaepernick's 2016 #TakeAKnee movement and subsequently banned players from kneeling during the national anthem. The league has since admitted it was wrong for not listening to its players.

So will this boycott lead to change?

Unclear. But it's helping the issue get even more attention. Meanwhile, protests continued for a fourth night in Kenosha, WI. The city is still reeling after two protesters were shot and killed on Tuesday night. The suspect: 17-year-old Kyle Rittenhouse – who apparently considered himself a member of a militia. Yesterday, authorities arrested and charged him with first-degree intentional homicide after he'd fled Wisconsin to avoid the charges. Rittenhouse's being held without bond and a hearing tomorrow will determine if he'll be sent back to Wisconsin.

August 26, 2016: The day Colin Kaepernick sat for the national anthem in a peaceful protest against racial inequality. Exactly four years later, these players are uniting to say 'we need change more than we need sports.'

What was singing 'the show must go on'...

The Republican National Convention. Amid nationwide protests, a looming hurricane, and deadly wildfires, the RNC's third night took off without a hitch under the theme of "Land of Heroes." Second lady Karen Pence, press secretary Kayleigh McEnany, and senior counselor Kellyanne Conway reached out to women, sharing their support for President Trump who stood by them and "will stand up for you." Several veterans took the mic to recount their stories of heroism, while other speakers gave an ode to police officers. Comments that were echoed by Vice President Mike Pence who took the stage from Fort McHenry in Baltimore, MD, – which inspired "The Star-Spangled Banner." He applauded law enforcement and denounced Democratic presidential nominee Joe Biden for wanting to defund the police (quick fact-check: he doesn't). He spoke of the recent protests, saying that "the violence must stop." But never once mentioned Jacob Blake's name. Pence also offered his support for the families in the path of Hurricane Laura, and told viewers the US was on track to have the first safe and effective COVID-19 vaccine by year's end.

Hurricane Laura. The storm made landfall early this morning as a Category 4 hurricane in southwest Louisiana. It brought 150 mph winds and the National Hurricane Center predicted an "unsurvivable" storm surge – with water rising up to 20 feet – warning it could cause "catastrophic damage." The storm surge could reach 40 miles inland. More than 1.5 million people have been ordered to evacuate the area and researchers said Laura's one of the most powerful storms ever to hit the US, even though it's weakened to a Category 3. Hundreds of thousands of homes have already lost power. Making things even more difficult: the COVID-19 pandemic. Officials told evacuees to shelter in hotels or with family so they can avoid potentially crowded evacuation centers. In Texas, they plan to provide protective equipment and coronavirus testing at shelters. And Louisiana has activated its entire National Guard to help.

What has people scratching their heads...

The CDC's new guidelines. Earlier this week, the CDC (quietly) published new recommendations saying people who've been exposed to COVID-19 "do not necessarily need a test" if they don't have symptoms. And said to ask the Trump admin about the change. The admin's explanation: the guidelines were updated to "reflect current evidence and best public health practices." And that people could get a false sense of security after testing negative. But health officials (including Dr. Anthony Fauci) are raising flags that this could lead to more infections at a time when over 179,000 Americans have died. And many can't help but feel this is the Trump admin's latest move to politicize the pandemic.

Who's not up for the (TikTok) challenge...

Kevin Mayer. Yesterday, the recently hired TikTok CEO announced his last dance with the company and resigned. This comes just days after the Chinese video-sharing app sued the Trump admin for trying to ban it in the US. No word on how this will affect the several companies (hi Microsoft, Twitter, and Oracle) who've looked into buying TikTok to keep it (and its users) in the US. TikTok said it "fully" respects Mayer's decision and wishes him well.

What's on the agenda…