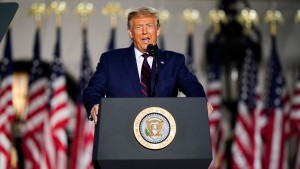 Didn't that happen...a while ago?

Now it's official, official. Yesterday, Trump formally accepted the Republican nomination for president at the White House in front of more than 1,500 people. In his speech, the president appealed to evangelicals and praised his admin for: bringing troops home, obliterating "100% of the ISIS caliphate," getting the "first Middle East peace deal," confirming two new Supreme Court justices, doing more for Black people "than any president since Abraham Lincoln," and fixing the economy "before the China virus came in." He also called out Democratic presidential nominee Joe Biden (and his 47-year tenure) for just about everything, adding that "we're here and they're not." His acceptance capped off night four of the RNC – which was all about location, location, location:

The Retweets…The Trump kids took center stage, with Ivanka Trump getting the (almost) last word. VP Mike Pence gave his boss the thumbs up. First lady Melania Trump said she feels our pain. Sen. Tim Scott (R-SC) – the only Black Republican in the Senate – talked about the promise of the American dream. Secretary of State Mike Pompeo and former UN Ambassador Nikki Haley gave the admin a shoutout. And Kimberly Guilfoyle said 'let's get loud.'

The Likes…There was a lot of love for "law and order." As in, Trump stands by law enforcement and law enforcement stands by him. It was a big theme for VP Pence. And the McCloskeys, the Missouri couple who pointed guns at Black Lives Matter protesters. "Cancel culture" got called out. Schools got called to reopen, and school choice got a gold star. Trump was applauded for putting women in leadership positions, and received praise from anti-abortion activists.

The Yikes...There were some last-minute speaker switch-ups (two nights running). And possible Hatch Act violations. Some people didn't know they were making an appearance. Social distancing didn't seem to be top of mind. Neither did masks. And overall, the convention downplayed the pandemic and racial injustice – instead, focusing on the "rioting, looting, arson, and violence" at protests in "Democrat-run cities" across the US.

That's a wrap on the conventions. And it's unclear if they had much of an impact on influencing voters. But there's still plenty to come before you vote (in T-67 days). Like the debates next month, where Trump and Biden will have more chances to make their case to voters.

Japan's Prime Minister Shinzo Abe. Today, the country's longest-serving PM said he's resigning because of health issues. He had a little over a year left in his term, and had been at the helm for almost eight years. He's suffered for years from ulcerative colitis, a bowel disease, but said it's recently gotten worse. Abe had worked to revive Japan's economy, although it's suffered recently due to the coronavirus pandemic. He also helped Tokyo win the bid for the now-postponed 2020 Olympics. But he wasn't able to complete one major goal – revising the country's US-written pacifist constitution. Recently, his approval ratings had severely dropped as Japanese citizens criticized him for his handling of the pandemic. Japan's parliament will choose Abe's successor.

The March on Washington 2020. Today, tens of thousands of people are expected to march in Washington, DC (and virtually) for a civil rights rally – dubbed the "Get Your Knee Off Our Necks" March. It's happening on the 57th anniversary of the historic March on Washington in 1963, when Martin Luther King Jr gave his famous "I Have A Dream" speech. Rev. Al Sharpton and civil rights groups organized the march following the death of George Floyd – who was killed after a now-fired Minneapolis police officer knelt on Floyd's neck back in May. Relatives of George Floyd, Breonna Taylor, Eric Garner, and Jacob Blake are expected to participate. Among the demands from protesters: police reform and protections for racial minority voters.

Skimm More: Here's what to expect at today's march and what protesters are demanding.

Laura. Yesterday, the storm made landfall along the Gulf Coast as a Category 4 hurricane – killing at least six people and leaving more than 875,000 people without power and neighborhoods in ruins. The full extent of the damage won't be known for days. But Louisiana Gov. John Bel Edwards (D) said the state escaped the worst case scenario. President Trump is heading to the area this weekend to survey the damage. Laura is one of the most powerful storms to ever hit Louisiana, surpassing Hurricane Katrina. It weakened to a tropical storm as it made its way north.

Who's not really clearing things up…

The CDC. Yesterday, the health agency's director tried to clarify recent (and by recent, we mean really recent) changes on COVID-19 testing guidelines. After receiving backlash for saying not everyone who's exposed to the virus needs a test, the CDC now says testing "may be considered" for anyone who came into close contact with someone infected. Thanks for that.

Who's slated to make out-of-this-world history...