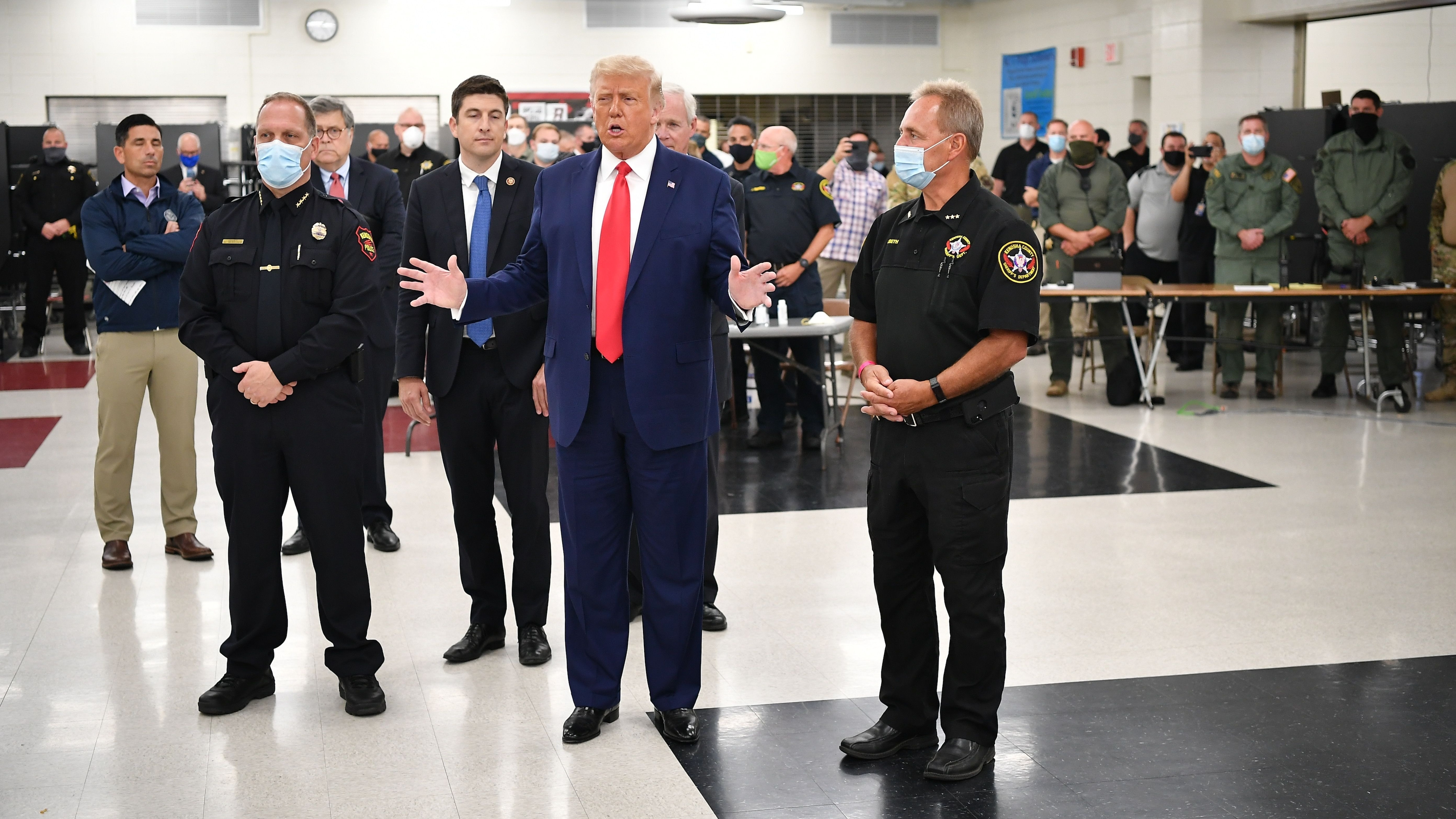 Yesterday, all eyes were on President Trump.

He visited Kenosha, WI – a city that's still reeling after police shot Jacob Blake in the back seven times last month. Blake, a 29-year-old Black man, is now paralyzed from the waist down. The shooting prompted protests there and across the country, adding to calls for police reform and racial justice. And last week, authorities charged a 17-year-old – who was walking around the protests with a semiautomatic rifle – with killing two of the protesters and injuring a third. Local leaders had warned that Trump's visit would only heighten tensions. Lt. Gov. Mandela Barnes feared it would be like a "barrel of gasoline rolling in" on a city on fire. But the White House said the president's visit would help the city "heal."

It's unclear. The president toured the damage from protests in Kenosha, a city he claimed had been "ravaged by anti-police and anti-American riots." He held a roundtable with police and local leaders focused on community safety. He announced that his admin would provide millions of dollars to law enforcement in Wisconsin and to Kenosha businesses so they can rebuild. And many said they were grateful.

But Trump still never mentioned Jacob Blake's name (nor did he meet with Blake's family). Instead, he reiterated his support for law enforcement and the small businesses in Kenosha. And seemed to downplay police shootings, saying they happen when officers "choke" under pressure. He said he doesn't believe police violence is a systemic issue but that there are some "bad apples." Many local residents weren't happy with the visit. That includes Blake's family – which held a rally to promote healing at the same time. Their lawyer said Blake should've been Trump's "primary focus" – not for him to try to gain "political points."

The role of a president is not only to lead and enforce laws – it's also to unify a nation. And as America nears Election Day, the country's direction could come down to voters deciding who is better fit to handle the problems dividing Americans.

Who's done with group projects...

The Trump admin. Yesterday, it said 'pass' to joining a global effort (co-led by the WHO) to find and evenly distribute a COVID-19 vaccine. More than 170 countries are in talks to join the initiative known as COVAX – whose goal is to make a vaccine available to high-risk people around the world, and to discourage countries from hoarding it once it's developed. But the White House said 'no thanks.' Instead, the US is placing its bets on delivering a safe and effective vaccine on its own by next year. It's a gamble that could leave the country without options.

...Oh and speaking of COVID-19, the Trump admin said it'll ban evictions for many renters through the end of the year. To apply, people will have to prove they can't afford rent because of the pandemic.

Where people are saying 'told you so'...

Belarus. Yesterday, a new report came out detailing allegations of fraud in the country's recent presidential election. Reminder: Last month, President Alexander Lukashenko (who's ruled for 26 years) won reelection with 80% of the vote. Hundreds of thousands of people protested for weeks, claiming the results were rigged. Now, some poll workers are reportedly saying they saw ballot fraud or were pressured to falsify the results in favor of Lukashenko. And that the main opposition candidate – Svetlana Tikhanovskaya – actually led in several precincts. The country's election commission reportedly said 'umm these are mostly procedural violations, not fraud.'

Skimm More: Our podcast "Skimm This" has more about what's happening in Belarus. We spoke to journalist Hanna Baraban about the protests there.

Who's searching for justice...

Lessie Benningfield Randle. Yesterday, the 105-year-old woman led a group of Oklahomans in a lawsuit seeking reparations for the Tulsa Race Massacre. Reminder: In 1921, white mobs burned down and attacked a thriving Black neighborhood (known as Black Wall Street), killing as many as 300 people. It was one of the worst acts of racial violence in US history. Now, Randle – one of two living survivors of the massacre – and the others say racial inequality in Tulsa today can be traced back to the massacre. And they accuse the city and county of being at fault. The county sheriff and city's mayor reportedly had no comment on the lawsuit.

Who's looking for a particular box to be checked...