Daily Skimm: Trump and COVID-19, A Whistleblower Complaint, and "Dune" 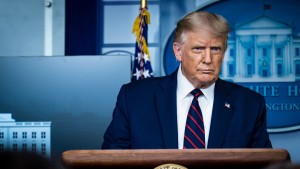 Things Coming Out of the Woodwork

A new book is giving insight into President Trump's handling of COVID-19.

Yesterday, Americans caught a glimpse of reporter Bob Woodward's new book, including his interviews with the president. And Woodward has the receipts. In them, it's revealed that Trump knew about the dangers of the coronavirus (read: that it appears to be "more deadly" than the flu) as far back as January – when the first known case was reported in the US. And that he intentionally downplayed the virus's threat so as to not "create a panic."

I can already hear the Democrats screaming...

You're not wrong. Many were furious – including Democratic presidential nominee Joe Biden, who said the president's comments were a "betrayal of the American people." And that sharing this knowledge could've prevented thousands of deaths. But the White House says Trump "never lied" to the public about the virus. And that he was simply trying to instill hope and calm during a time of uncertainty.

Nearly 190,000 lives have been lost to COVID-19 in the US. Now, more than six months since the first case, Americans are learning more about the Trump admin's behind-closed-doors response to a once-in-a-century pandemic.

A top intel official is blowing the whistle on the Trump admin.

Earlier this week, a senior Department of Homeland Security official filed a complaint. In it, he claims he was told to scrap intel reports of Russian interference in this year's election. Why? Because it "made the President look bad." Reminder: Trump's long claimed that Russian interference in the 2016 election was a "hoax." Now, concerns about censorship and national security led to an official complaint.

House Intel Committee Democrats said this points to some law breaking and abuses of power (sound familiar?). Its chairman called the claims "grave and disturbing," especially since interference still appears to be on Russia's agenda. The whistleblower has been subpoenaed to testify on Capitol Hill later this month. Meanwhile, top DHS officials "flatly deny" the allegations.

This year's election is already slated to be unprecedented as voters head to the polls (or their mailboxes) amid a global pandemic. With less than two months until Election Day, this complaint could move foreign interference higher on the list of concerns – all the while giving Americans déjà vu in more ways than one.

The West Coast. Dozens of fires have burned more than 5,300 square miles (about the size of Connecticut) throughout 12 Western states, killing at least seven people. In Oregon, officials ordered people to evacuate after several towns were "substantially destroyed." And in Washington, the governor said more acres have burned in 24 hours than the last 12 fire seasons. The wildfires have turned skies bright orange and red and created hazardous air quality levels in some regions. Thousands of firefighters are trying to put an end to the blazes. But fire season isn't over just yet, and weather conditions like high winds are only adding to the flames.

Greece. This week, fires broke out in Europe's largest migrant camp on the Greek island of Lesbos. The fires are believed to have been started intentionally in response to the camp's coronavirus lockdown measures. No one's been killed, but more than 12,000 people are finding themselves without a home once again. Greek officials said they're trying to find temporary housing, and other European countries and the UN have reportedly offered help

The Academy. For years, it's faced criticism for a lack of diversity among its membership and award nominees (remember #OscarsSoWhite?). And in June, it said it would implement new rules to change that. Now, we're getting the details: starting in 2024, each film will have to meet two of four new standards to be considered for best picture. The standards include requirements for lead actors (or significant supporting actors) to be from an underrepresented racial or ethnic group. Other requirements call for diversity behind the camera too

US troops. Yesterday, a top military commander announced the US is cutting the number of troops in Iraq by nearly half (read: down to 3,000) this month. And said it's making the move because of the US's "confidence in the Iraqi Security Forces" to operate independently. The commander also said that the US is on track with its plans to pull out about half of its troops from Afghanistan in the fall. The announcements are seen as a win for President Trump, who's promised to reduce the number of troops abroad

The NFL. The regular season kicks off tonight. On the field: the Houston Texans and the Kansas City Chiefs (aka the reigning Super Bowl champs). And MVP QB Patrick Mahomes is ready to gear up. Depending on where you live, you might even be able to cheer your team on in person (in a stadium with limited capacity). Get the buffalo chicken dip ready

Who we wouldn't mind being stranded on a desert planet with...