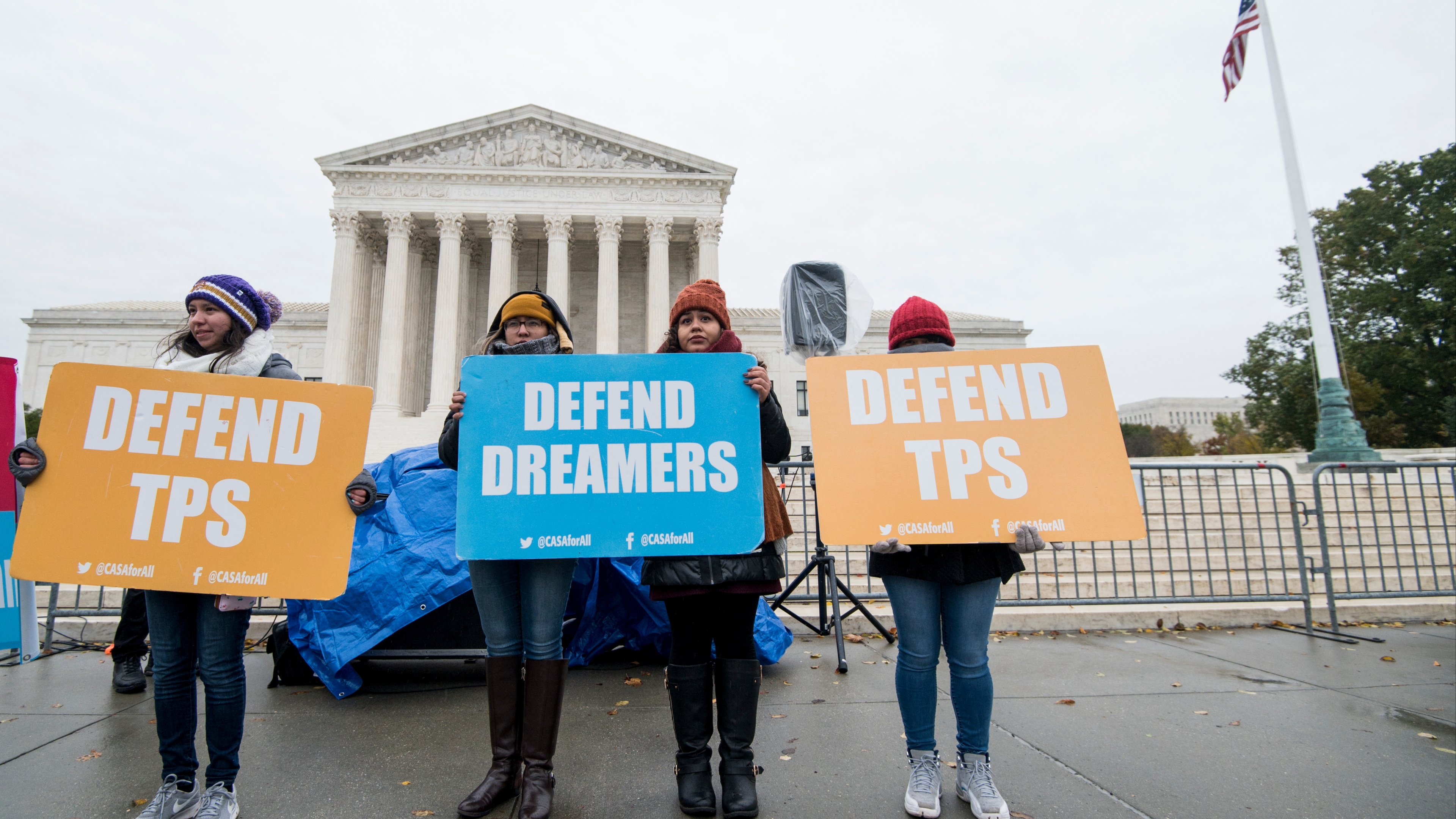 Hundreds of thousands of immigrants could be forced to leave the US.

Yesterday, a US appeals court in California gave the Trump admin the go-ahead to phase out the Temporary Protected Status (TPS) program. Started in 1990, it has allowed over 300,000 immigrants – who faced armed conflict or national disasters in their home countries – to stay and work legally in the US. But the admin argues some of those countries have recovered from the issues that initially forced people to flee. And has tried to end parts of the program for years. A federal judge blocked that plan back in 2018, but now an appeals court's saying 'actually...we're overturning that.'

So who does this affect?

People enrolled in TPS come from countries like Sudan, El Salvador, Haiti, Nicaragua, Honduras, and Nepal. And many have been in the US for decades. With this ruling, most will be able to stay in the US until January 4, 2021. After that, they will reportedly have six months to figure out another way to legally stay in America. Or risk getting deported.

President Trump isn't the program's biggest fan. He once reportedly said the people enrolled in it came from "sh*thole countries." But the court ruled that Trump's "offensive" comments didn't have anything to do with the admin's decision to end the program. And that it has the power to change the program if it wants. Meanwhile, the National TPS Alliance called the decision "cruel," and said about a third of the enrollees have been essential workers during the pandemic. And the ACLU (which represented TPS holders in court) said it'll fight the decision, possibly all the way to the Supreme Court.

Immigration is always a hotly-debated policy – especially in an election year. While President Trump has campaigned on limited legal immigration, Joe Biden has pledged to undo the Trump admin's actions – including when it comes to TPS. But right now, hundreds of thousands of immigrants are looking for answers in the middle of this debate.

The West Coast. Yesterday, President Trump was in California meeting with local and federal officials battling the wildfires. At a briefing, he (again) blamed poor forest management for fueling the fires, didn't acknowledge the impact of climate change, and said "it'll start getting cooler." But governors (and scientists) on the West Coast beg to differ. So does his 2020 rival Joe Biden, who criticized Trump for being a "climate denier" and not taking responsibility for "another crisis."

Thing to Know: Air Quality Index. Ranging from 0-500, it measures air pollution and shows how hazardous it is to people's health. The higher the number, the more polluted the air is and the more dangerous it can be for the public. The health effects can range from itchy throat to serious respiratory problems and infections. Check your AQI here.

Hurricane Sally. The storm's weakened to Category 1 in the Gulf Coast but is expected to strengthen as it nears Louisiana, Mississippi, and Alabama as soon as this afternoon. Officials are warning of life-threatening storms, flash floods, and winds up to 110 mph. Many residents have been ordered to evacuate as experts warn Sally could turn into a Cat 3. This comes as tens of thousands of people in Louisiana still don't have their power back after Hurricane Laura hit last month. And for only the second time on record, four other tropical cyclones are currently churning in the Atlantic Ocean.

What's got scientists hot and bothered…

Venus. Yesterday, scientists said they detected a gas on the planet that pointed to possible signs of life. Quick astronomy lesson: Venus – named after the Roman goddess of love and beauty – is the second planet from the Sun. And for years, many scientists haven't focused on the possibility of life there because it's extremely hot (think: 800 degrees) and its clouds contain sulfuric acid. Now, scientists are saying they've detected phosphine – a foul and toxic gas that's also found on Earth (in swamps and animal intestines...yum). The discovery's got some saying 'we may not be alone.' Others aren't convinced. The truth is out there.

What's apparently in its Prime…

Amazon. Yesterday, the online retail giant said it's hiring another 100,000 employees across the US and Canada to keep up with customers' new quarantine shopping habits. This is Amazon's fourth hiring spree in the US this year. And it comes ahead of its highly anticipated Prime Day and the holiday shopping season.

What pairs well with your virtual Thanksgiving Day Parade…

A "Crave Clutch" and some Jalapeño Noir.