Daily Skimm: Peaceful Transition of Power, COVID-19 Vaccines, and a "Father of the Bride" Reunion 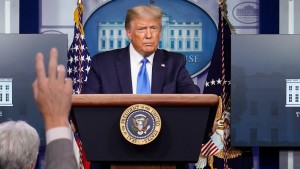 If the Time's Up

President Trump suggested he may not accept losing the election.

Well, kind of. Earlier this week, Trump was asked whether he would hand over the presidential baton if he lost in November. Or rather, if he would commit to a peaceful transfer of power. His response? "We're going to have to see what happens." Let's rewind a little: the peaceful transfer of power is fundamental to democracy. It's a process that is outlined in the Constitution – which every president swears an oath to. Every single losing candidate (including incumbent presidents) has conceded, even during contested elections (see: 2000, 1876). Now, Trump's saying 'we'll see.'

So this isn't normal?

It would be unprecedented. Trump made similar comments in 2016. This year, however, the president is harping on the fact that voting will look quite different. Throughout his campaign, Trump has criticized mail-in voting, saying it leads to voter fraud. And has suggested states "get rid of" that voting process. But people have been voting by mail for decades (including Trump himself), and there's been little (one analysis says 0.0025%) evidence of fraud. Oh and, the FBI director says it's seen no evidence of a "coordinated national voter fraud effort." But that's not all.

Trump and other Republicans have claimed that there is a possibility of a contested election. Meaning, the election's legality or validity could be challenged. In that case, the Supreme Court may have to weigh in. (It's happened before.) So the president and Republicans insist on filling late Justice Ruth Bader Ginsburg's seat quickly. That's because with only eight justices serving, there's a possibility of a 4-4 tie in an election dispute. Trump's expected to announce his nominee tomorrow, and if the Senate agrees on his pick, the SCOTUS bench would lean heavily conservative.

Despite all of this, lawmakers on both sides of the aisle are trying to tame the flames. Senate Majority Leader Mitch McConnell (R-KY), along with Sens. Susan Collins (R-ME), Mitt Romney (R-UT), Marco Rubio (R-FL), John Thune (R-SD), and Reps. Liz Cheney (R-WY) and Steve Stivers (R-OH) all said a peaceful transition of power is happening – should Trump lose in November. Meanwhile, Trump's 2020 rival Joe Biden's campaign said it was ready for any "shenanigans" and that the US gov "is perfectly capable of escorting trespassers out of the White House."

A peaceful transition of power is the cornerstone of US democracy. It's how we have the legitimacy to criticize other not-so-democratic governments (think: Belarus, Russia). While the president's comments aren't easing concerns, lawmakers are saying 'don't worry.' But regardless of who you want to win, make your voice heard. If you need a little help with that, we got you.

What's getting some extra time...

The US Census. Yesterday, a federal judge barred the Trump admin from ending the 2020 Census a month early. Reminder: The admin had moved up the deadline from October 31 to September 30, saying it was needed in order to process all data before the end of the year. But civil rights groups sued, arguing it would lead to a serious undercount that would disproportionately impact immigrants and people of color. And a federal judge agreed. The census determines how many seats each state gets in the House. And how federal funding should be divided for things like schools and hospitals. Now, a federal court is saying the census has through the end of October to finish its once-a-decade count of every US resident. The admin is expected to appeal the ruling.

Gov. Andrew Cuomo (D-NY). Yesterday, he said that he doesn't "trust" the federal gov's opinion on coronavirus vaccines – and any potential vaccine would get a second set of eyes before it's distributed in NY. This comes after President Trump said he may challenge the FDA on stricter vaccine guidelines. Now, Cuomo announced he'll form a panel of scientists, doctors, and public health experts to review a vaccine's safety and effectiveness. Meaning, NY could delay or even stop distribution if it finds the vaccine doesn't pass its criteria.

A Black physicians group. A task force with the National Medical Association (NMA) is reportedly reviewing data on COVID-19 vaccines. Its goal is to ensure safety, especially for Black Americans – a community that's already been disproportionately affected by the coronavirus. NMA's president reportedly said the decision comes amid fears that federal health agencies are being dictated by politics (think: the CDC and the FDA). The group says it'll be making sure that diversity is represented in clinical trials and data surrounding potential vaccines.

Where a probe could be blooming…

Florida. Earlier this week, the state's AG asked the FBI and state law enforcement to investigate billionaire Mike Bloomberg for "potential violations of election laws." That's because he's raised over $16 million to pay the court fines and fees of more than 30,000 Black and Latino former felons so they can vote. Reminder: Earlier this month, a federal appeals court upheld a 2019 Florida law requiring ex-felons (read: over a million people) to pay off their court debts before they cast a ballot. Now, Bloomberg's partnered with the Florida Rights Restoration Coalition (FRRC) to help bring balances down to $0.

Where parents are cooing...

France. This week, President Emmanuel Macron said paid paternity leave for new dads will double from 14 to 28 days starting next summer – making it one of Europe's most generous paternity plans. Because it shouldn't just be mom taking care of the bébé.

Psst...America is taking baby steps in the same direction. Starting next month, federal workers will get 12 weeks of paid parental leave. Here's what that could mean for your wallet – even if you don't work for the gov.

Who are the ultimutt heroes...

These dogs. A program in Finland has trained them to sniff out COVID-19 in people at the Helsinki airport within 10 seconds. Way cuter than a nasal swab.

Who's joining the Big Ten...

What to add to your queue…

"Father of the Bride" and SNL's season premiere.