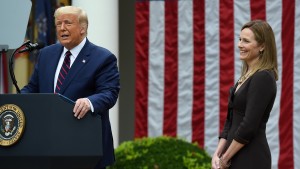 And the Nominee is...

There could soon be a new Supreme in town.

Meet Judge Amy Coney Barrett. Over the weekend, President Trump said 'I choose you' – making Barrett the president's third Supreme Court nominee. He called her "one of our nation's most brilliant and gifted legal minds." Now, she's on track to fill the late Justice Ruth Bader Ginsburg's seat on the high court. At 48 years old, Barrett would be the youngest justice serving on the current court if she's confirmed.

Give me more deets.

Barrett could also be the first mother of school-aged kids to serve as a justice – she and her husband have seven children. As a graduate of Notre Dame Law School, Barrett clerked for the late Justice Antonin Scalia in the '90s. And she later returned to her alma mater as a law professor. In 2017, she was appointed to the Seventh Circuit Court of Appeals in Chicago, IL. A year later, she was among the finalists to replace Justice Anthony Kennedy – whose seat eventually went to Justice Brett Kavanaugh.

Barrett's known as a devout Catholic and originalist (just like Justice Scalia was) – someone who interprets the Constitution as it was originally understood when it was adopted. Both of those things have Americans thinking about how she could influence a conservative-leaning court's rulings for decades to come. Here's where she stands:

On abortion…Because of her conservative views, lawmakers on both sides of the aisle see Barrett as someone who could be in favor of overturning Roe v Wade. While Barrett has shown support for abortion restrictions in the past, she's stayed mum on what she'd do about the landmark 1973 decision on the SCOTUS bench. But she's left the door open to changing precedent (aka gutting previous rulings established by the Supreme Court).

On health care…Barrett's been critical of Supreme Court rulings that have left the Affordable Care Act in place. She's claimed that Chief Justice John Roberts bent the law in a 2012 decision to save it. If confirmed, she could rule against the ACA, which the court is taking up in another legal challenge a week after the election. Democrats say striking it down could be disastrous for Americans in the middle of a pandemic.

On gun rights…She's shown support for the Second Amendment. In a 2019 dissent, Barrett argued that a person convicted of a nonviolent felony shouldn't be automatically barred from owning a gun. Recently, the Supreme Court has said 'pass' to many gun-rights cases, but that could change with a conservative majority on the bench.

Republicans have promised a speedy confirmation process. Trump wants it done before Election Day – which is 36 days away. Note: On average, it takes about 70 days to confirm a new justice. But it's been done in a little over 40 days before. Barrett's confirmation process is scheduled to start October 12th. Four days of hearings are slated for opening statements, questioning, and testimony from outside witnesses. If all goes according to Republicans' plan, Barrett could be donning a new robe days before November 3.

With just about five weeks until Election Day, President Trump's campaign is hoping this last-minute confirmation battle will rev up his supporters – since Barrett could move the court to the right for decades to come. But Joe Biden's team is hoping they can shift the focus to Barrett's record on the ACA – portraying her as a potential vote against a law that's gotten millions of people insured. Both of them will have a chance to make their case tomorrow night, in the first presidential debate.

The New York Times. Yesterday, the paper reported that it had obtained decades worth of info on President Trump's tax returns. And found that he paid no federal income taxes in ten of the last 15 years. In both 2016 and 2017, he paid $750. (The IRS reportedly says the average taxpayer has to hand over about 16 times more than that.) The reason his bill was so low? Trump apparently claimed millions of dollars in losses from some of his biggest businesses.

Where people are asking questions...

Louisville, KY. Over the weekend, news outlets revealed details about the Kentucky State Police ballistics report from the night Breonna Taylor was killed. Reminder: In March, the 26-year-old Black woman was shot (at least six times) and killed by police officers serving a search warrant at her apartment in the middle of the night. Last week, Kentucky's AG Daniel Cameron announced that none of the officers would be charged for her death. And that two of the police officers' actions were "justified" because her boyfriend Kenneth Walker shot first, hitting an officer in the leg. But that's not what the ballistics report shows. In fact, the report couldn't determine whether Walker or another officer present fired the bullet that struck the officer's thigh. The news came amid ongoing protests across the country calling for justice for Breonna Taylor.

Armenia and Azerbaijan. Yesterday, at least 16 people were killed after fighting broke out in Nagorno-Karabakh – a disputed region between majority Christian Armenia and mainly Muslim Azerbaijan. The area is within Azerbaijan's borders but is controlled by ethnic Armenians. And the two countries – both former Soviet republics – have been in a decades-long conflict over the region. But no one has taken responsibility for starting this wave of violence. Armenia claims that Azerbaijani forces launched a "missile and aerial attack" on settlements in the region. But Azerbaijan blames Armenia. Now, both countries have declared martial law and mobilized armed forces.

This NFL game. Yesterday, three women (two coaches and one referee) were on the field during a game between the Cleveland Browns and the Washington Football Team. It was the first time ever that women were on both sidelines coaching and officiating an NFL game. That's goals.

...Oh and speaking of big games, the NBA Finals are set with the Los Angeles Lakers and Miami Heat facing off in Game 1 on Wednesday. It'll be the Lakers' first appearance in a decade – and will give LeBron James a chance to catch up with his old team.

While Yara Shahidi is delivering on pixie dust...

This story is delivering on pizza and happy tears.