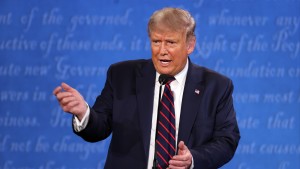 Let’s Talk About It

Now that we've somewhat recovered from the debate hangover, let's circle back to a key moment.

The moment the president of the United States refused to condemn white supremacists. When asked about race and violence in our cities, President Trump was given the opportunity to denounce white supremacists. But he did not. With a national audience of at least 73 million people, he passed on a chance to try to unite and comfort the nation – at a time when hundreds of thousands of Americans have been protesting against systemic racism. And are facing a pandemic that's claimed over 200,000 lives in the US. Instead, he told a far-right group – known as the Proud Boys – to "stand back and stand by."

I still can't believe it.

You're not alone. Trump's statement garnered immediate criticism. From lawmakers on both sides of the aisle to anti-racism activists to celebrities and athletes – all called it unacceptable. Some Senate Republicans urged the president to correct his comments. Meanwhile, the White House tried to play them down, with the Trump campaign claiming that he had "repeatedly" condemned white supremacy. But many people see a pattern.

While running for president, he refused to condemn former KKK leader David Duke, after Duke had endorsed him. In 2017, the president referred to white nationalists at the deadly rally in Charlottesville, VA, as "very fine people." In 2018, he reportedly asked why the US accepts immigrants from "sh*thole countries" in Africa. In 2019, he told four congresswomen of color to go back to the "crime infested places from which they came." In June, Trump retweeted a video where an apparent supporter is heard screaming "white power." Now, he seems to have given a nod to the Proud Boys.

A self-described "Western chauvinist" group that's been around since 2016. The men-only group – which the Anti-Defamation League describes as "violent, nationalistic, Islamophobic, transphobic, and misogynistic" – has been connected to a series of violent incidents (like the Charlottesville rally). And has shown up armed to several Black Lives Matter protests. Yesterday, Trump seemed to walk back his comments, telling the group "to stand down." But the damage was already done. The Proud Boys and the like, feeling validated, had already taken it as a call to action (with merch in tow).

That's a good question. The impact of the president's comments may not be fully known until Election Day (in 33 days). As for the trainwreck that was the debate, officials are stepping in. The Commission on Presidential Debates said it's going to make some changes "to ensure a more orderly discussion of the issues." So stay tuned for those updates – which could come as soon as the VP debate next week.

The first presidential debate in the 2020 race had a lot going on. But out of all the interruptions and inaudible moments, there's a clear message that's been made: the country's highest office is led by a person who failed to condemn white supremacists on national television.

What may not be flying high…

The airline industry. Today, airlines will start furloughing more than 30,000 workers after lawmakers failed to reach a deal on a coronavirus relief package. Reminder: The pandemic has hit the industry particularly hard. Air travel's down about 70% from last year. But back in March, airlines agreed not to furlough any employees until October 1st as a condition of a $25 billion federal bailout. Now, that deadline is here. Treasury Secretary Steve Mnuchin is asking airline executives to delay the furloughs as he works with House Speaker Nancy Pelosi (D-CA) on legislation to provide more funding. The House could vote on it as early as today.

...Oh and speaking of funding, President Trump signed a bill this morning that would keep the US gov open through December 11.

This rocket strike. Yesterday, an Iran-backed Iraqi military group launched several rockets – targeted at US troops – in northern Iraq. Three of them reportedly struck an Iraqi base that houses US troops. But a US official said there was no damage or casualties. This comes the same week the US threatened to close the US Embassy in Baghdad unless Iraqi leadership stops Iranian-backed militias from targeting US personnel. And days after the Iraqi military said at least five civilians were killed by a rocket attack in Baghdad.

Who people are waiting on…

Kentucky AG Daniel Cameron. Yesterday, a judge gave him more time before he has to release grand jury recordings in the Breonna Taylor case. Last week, a grand jury indicted only one officer – out of three – with three first-degree counts of wanton endangerment. Cameron said he'd outlined to the grand jury "every homicide offense" that the officers could face for Breonna Taylor's death – but the jurors agreed the officers' actions were justified. But then, a juror said 'that's not quite right.' And asked a judge to make the secret grand jury proceedings public. Now, Cameron says he didn't recommend any charges against the other two officers. He has until tomorrow to release the recordings.

What's going on in the sports world…

A lot. The NBA and WNBA are singing 'it's the playoffs, baby.' LeBron James, who's giving a big assist at the polls, had a big game last night. And the Seattle Storm and the Las Vegas Aces will face off tomorrow in the WNBA Finals. But while these teams are on the court, the NFL's telling the Titans and Steelers to stay off the field. And Serena Williams said 'au revoir' to the French Open.

What's a topping but isn't a topping...