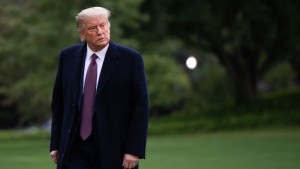 President Donald Trump has tested positive for the coronavirus.

Overnight, the president announced on Twitter that he and first lady Melania Trump both received positive test results for COVID-19 – hours after he confirmed that one of his closest aides, Hope Hicks, had contracted the virus. Trump said he and the first lady would begin their quarantine and recovery process immediately – and that we would get through this "together." But since more than 205,000 people in the US have been killed by the virus, the news sent shockwaves across the country, the financial markets, and the world.

Has he gotten sick?

It's not clear if either the president or the first lady have experienced any symptoms – but the White House doctor said they were doing "well" and he expected Trump to keep "carrying out his duties without disruption." The CDC says symptoms can appear two to 14 days after exposure to the coronavirus. At 74 years old, the president's at higher risk for severe illness from COVID-19.

The White House doctor said the Trumps would stay at the White House "during their convalescence." Today, the president was set to head to Florida for an in-person campaign rally. Now, the only thing on his schedule is a phone call on COVID-19 support to vulnerable seniors. With 32 days until Election Day, it's unclear how he will continue to campaign. Or participate in the next presidential debate on October 15. And if he gets seriously ill, it could raise questions about whether he should stay on the ballot.

For months, Trump's critics have said he hasn't taken the virus seriously – and that his admin hasn't done enough to protect the American people. He's refused to impose a national mask mandate – and has rarely worn one in public – even though it's considered one of the most effective ways to stop the spread of the virus. He's also held in-person events and indoor rallies – while his own health experts have recommended social distancing. He promoted an unproven drug as a treatment. And even though he knew about the dangers of the coronavirus all the way back in January, he intentionally downplayed the virus's threat so as to not "create a panic." And hours before he announced his test results, he claimed the "end of the pandemic" was in sight.

President Trump's diagnosis is the most serious known health scare to any sitting American president in decades. He'll have access to the best medical treatment in the world, and we wish him and the first lady a healthy recovery. With just over a month until an election that's largely seen as a referendum on how he's handled the pandemic, this news creates more uncertainty in an already unpredictable year.

Texas. Yesterday, Gov. Greg Abbott (R) ordered counties to limit the number of drop-off locations they have for mail-in ballots to...one. Starting today, Texans who are voting by mail (which is pretty limited) can drop their ballots at locations determined by their county's early voting clerk. Harris County – which includes Houston, has over 2 million registered voters, and is bigger than the state of Rhode Island – had planned to have 12 drop-off locations. Now, it's got to scale that back to one. Counties will also be required to allow poll watchers to monitor their drop-off spots.

This refugee cap. Earlier this week, the Trump admin announced plans to slash the number of refugees allowed to resettle in the US down to 15,000 – a historic low. In President Obama's last year in office, that number was around 110,000. But the Trump admin's consistently cut down refugee spots. Now, in part because of the coronavirus, the admin says it needs to prioritize the "safety and well-being of Americans." Refugee advocacy groups and Democratic lawmakers denounced the limit, saying it's part of a fear-mongering tactic to villainize refugees.

Where the tea is reaching a boiling point...

The UK. Yesterday, the European Union took legal action against the country after it failed to ditch its plans to rewrite parts of the Brexit deal. Reminder: Last month, the UK said 'we've had a change of heart about our divorce agreement.' And that it would be making some amendments to its Northern Ireland protocol. The EU said 'a deal's a deal' and gave the country less than a month to drop its plans...or else. But the UK hasn't backed down. So now, the EU's taking action – which could lead to a showdown at the European Court of Justice. But the EU and the UK are also still having trade talks – and could settle everything outside the court.

Where history's been made…

California. Earlier this week, Gov. Gavin Newsom (D-CA) signed a law creating a task force addressing reparations for slavery – the first law of its kind in the US. The nine-person panel will study and make recommendations on what kind of compensation would be provided and who would receive it. The new legislation comes amid nationwide protests against racial injustice and police brutality. Assemblywoman Shirley Weber (D), who authored the bill, said California had a responsibility to "lead the way in terms of civil rights."

Who's reminding us you don't have to suffer in silence...