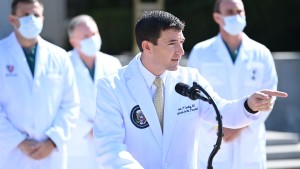 The entire country is focused on President Trump's health.

It was just four days ago that Trump announced he'd tested positive for COVID-19 – the most serious known health scare a sitting president's faced in decades. And over the weekend, that scare was dialed up several notches. On Friday, Trump was hospitalized for mild coronavirus symptoms (think: fever and fatigue) – less than 24 hours after his positive test result. Since his diagnosis, he has received an experimental antibody cocktail, remdesivir (an antiviral drug), dexamethasone (a steroid), and supplemental oxygen. Nearly all are treatments reserved for moderate to severe coronavirus cases.

Over the weekend, the White House acknowledged that Trump's status was worse than initially revealed, and Trump's physician admitted he originally downplayed the president's condition. However, Trump appeared to make extreme progress and was told he may be well enough to be discharged from the hospital as soon as today. Yesterday, he took a joy ride, waving to his supporters outside of Walter Reed hospital from the back of his SUV – before heading right back to his hospital suite. But in doing so, he may have put Secret Service agents, who traveled with him, at risk of getting the virus. And those aren't the only people whose lives are at risk.

Within days of the president's diagnosis, more than a dozen people with ties to his admin tested positive for COVID-19. Those are: first lady Melania Trump, three senators, former NJ Gov. Chris Christie (R), the RNC chairwoman, Trump's campaign manager, Trump's body man, three WH journalists, former White House advisor Kellyanne Conway, and the president of the University of Notre Dame. Nearly all of them have one thing in common: they attended the White House nomination ceremony for Judge Amy Coney Barrett over a week ago. It was a 'masks optional' affair, no social distancing required, and hugs welcomed. The ceremony's getting scrutinized as a possible "superspreader" event, and it's unclear if the CDC is notifying people who may have been exposed during that time.

The reality is that things are changing by the hour. We have no Magic 8-Ball, but we do have the US Constitution to tell us what could happen next (sort of). Here's where things currently stand:

The presidency right now…Under the 25th Amendment, if Trump were unable to carry out his duties, he could temporarily transfer power to the vice president. (President George W Bush invoked it twice when he had to get anesthesia for colonoscopies.) But according to officials, Trump has no plans to phone a friend (read: VP Mike Pence) just yet. But since it's 2020 and literally anything is possible, the 25th Amendment could allow the forcible removal of a president should he be too ill (or refuse) to transfer the power to the VP.

The election…It's still on. But if Trump's condition worsened to the point he couldn't run, the Republican National Committee would have to find a new candidate to put on the ballot – which could get complicated since early voting has already started in several states. In the meantime, the VP debate is still on for this week, and the Trump campaign is sending Pence out "in full force" to its in-person events.

SCOTUS hearings...The Republican-led Senate has the say on this one. And while they've opted out of legislative work until October 19, the Senate confirmation hearings for Judge Barrett are still on. Democrats are still saying 'delay, delay, delay.' Especially since Republican Sens. Mike Lee (UT) and Thom Tillis (NC) have tested positive for the virus – and they're on the committee running the hearings.

The nation and world are wishing the president and the first lady a full recovery. All the while, the Trump admin and campaign are facing renewed questions about their handling of the pandemic, the flouting of health guidelines in the days leading up to his diagnosis, and Trump's health. And now, with less than a month until Election Day, there's a high level of uncertainty about what the next few days – or weeks – could bring.

Armenia and Azerbaijan. The countries have competing claims to the Nagorno-Karabakh region (it's within Azerbaijan's borders but controlled by ethnic Armenians). Fighting broke out between the two sides late last month. It's the worst violence between the countries in years – with over 200 servicemen killed. And just yesterday, Azerbaijan said its second-largest city, Ganja, was attacked. One person was killed and dozens were injured. Azerbaijan blames Armenia for the violence and has promised to take the region back (with Turkey's help). Meanwhile, Armenia says this is all Azerbaijan's fault. And is calling on the US for backup. The Red Cross said it's "extremely worried," and European leaders are calling for an immediate ceasefire.

California. Yesterday, officials said the wildfires there have burned more than 4 million acres this year – that's roughly the size of Connecticut and the most ever burned in one year. The fires have killed at least 31 people, destroyed over 8,400 structures, and forced about 100,000 people to evacuate their homes. Right now, about 17,000 firefighters are still battling nearly two dozen major fires across the state. And it isn't over yet – fire season lasts until November.

The NFL. Over the weekend, it postponed the Kansas City Chiefs and New England Patriots game after players on both sides – including Pats QB Cam Newton and Chiefs practice squad quarterback Jordan Ta'amu – tested positive for COVID-19. The teams will play tonight instead.