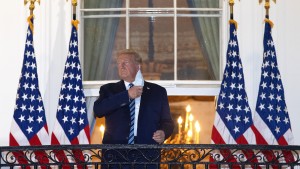 President Trump headed back to the White House yesterday.

The hospital. Three days after he went to Walter Reed National Military Medical Center, the president said he was feeling better than he did "20 years ago" and walked out donning a mask, and a thumbs up. Since testing positive for COVID-19, he's been given an experimental antibody cocktail, supplemental oxygen, steroids, and an antiviral drug. The president will continue his treatment at the White House – where the first lady has remained in isolation since testing positive last week.

His doctors think so. Dr. Sean Conley, the White House physician, has said Trump's condition has improved and that he'd continue to receive the best care in the world by "top-notch" health care workers. But Conley also didn't answer specific questions about Trump's health and cautioned that the president "may not entirely be out of the woods yet." Many of his aides encouraged the president to stay put, warning that it would look bad if his condition worsened and he had to go back to the hospital. Meanwhile, eager to return home, the president (once again) downplayed the virus that has cost so many lives.

Before his scheduled exit, Trump tweeted to millions of followers: "Don't be afraid of Covid. Don't let it dominate your life." Immediately, critics flocked to denounce his messaging (and actions). From health experts, to Democratic lawmakers, to celebrities, to everyday Americans: all were quick to remind the president that over 210,000 people in the US have died from this virus. And none were fortunate enough to get the kind of medical care he has access to.

There are fears the president could infect members of the White House staff (including housekeepers, cooks, and ushers). Trump didn't wear a mask when he walked in the building and his physician didn't say how he planned to safely quarantine at the White House – which is already dealing with a growing outbreak. Yesterday, White House press secretary Kayleigh McEnany and two of her deputies joined the list of aides who've tested positive for COVID-19. Adding to the more than a dozen people (including senators and reporters) linked to the Trump admin who've recently tested positive – nearly all of whom attended Judge Amy Coney Barrett's nomination ceremony over a week ago. At least 11 Ohio debate staffers have tested positive too.

While the country's rooting for Trump's recovery from COVID-19, the president's attitude surrounding his illness has many people baffled. And his doctor's unwillingness to provide a complete, factual briefing on Trump's condition isn't easing concerns. As the admin's response to COVID-19 has been put under a magnifying glass, so has its ability to let Americans in on the truth.

What's saying 'this is serious'...

The CDC. Yesterday, the health agency updated its COVID-19 guidelines to read that the virus can be transmitted through "small droplets and particles" that linger in the air. If that sounds familiar, it's 'cause it is. Reminder: Last month, the CDC published the same guidance, sending health officials scrambling to figure out how this would affect schools and businesses. But then, the CDC walked it back, saying it was accidentally published. Now, the agency's saying 'no, no, we really meant that' – and joins the WHO and hundreds of scientists in acknowledging that airborne transmission may be a thing.

Where voters will want to check the rules...

South Carolina. Yesterday, on the first day of its new term, the Supreme Court reinstated a requirement that South Carolinians include a witness's signature on their absentee ballots. Lower courts had suspended the rule because of the pandemic. But South Carolina Republicans wanted to keep the rule in place – saying it helped prevent fraud. (Reminder: Experts have said there's little evidence of election fraud.) Now, the high court has sided with the GOP lawmakers but said the state will still have to accept ballots cast before the court's decision – as long as they arrive within two days. Over 150,000 absentee ballots have been mailed to voters in the state. Democrats had warned the requirement could cause confusion and endanger voters by exposing them to others infected with the virus.

...Oh and speaking of SCOTUS, it passed on an appeal from a Kentucky county clerk who wouldn't issue marriage licenses to same-sex couples. But two conservative justices issued scathing remarks on the ruling that legalized same-sex marriage, raising questions about its future if there's a solidly conservative bench.

Regal Cinemas. After starting to reopen back in August, Regal's parent company said it's once again pulling the curtain on all theaters. The reason: there aren't enough blockbusters coming out. The move, which the company called temporary, will affect about 45,000 employees worldwide.

Who's getting some recognition...

This trio. Yesterday, Harvey J Alter, Charles M Rice, and Michael Houghton received the Nobel Prize in Physiology or Medicine for their 1989 discovery of hepatitis C – a virus that kills over 400,000 each year. The Nobel Committee said their discovery has led to new blood tests and medicines that have "saved millions of lives."

What's inspiring us to play doll house and vote...

This Susan B Anthony Barbie.