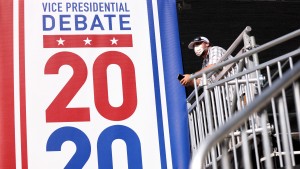 The VPs are getting the spotlight.

Tonight, Vice President Mike Pence and Democratic vice presidential nominee Kamala Harris are taking the debate stage at 9pm ET at the University of Utah. It's the first and only VP debate of the 2020 election, and USA Today's Susan Page will moderate the 90-minute event. Harris will make history (again) – this time, as the first BIPOC woman on a VP debate stage. But there's another 'first' people are talking about.

It's the first debate since President Trump – and more than 20 others with ties to his admin – tested positive for the coronavirus. The latest to join the list: Trump's top speechwriter and senior adviser Stephen Miller. Plus, several top military leaders are quarantining after a Coast Guard admiral tested positive for the virus. Pence, who had been in close contact with the president, has tested negative. And he's agreed to some extra safety measures tonight. That includes plexiglass dividers (even though Pence didn't originally want them). The candidates will also be 12 feet apart and the audience must wear masks.

So, what can we expect?

You can expect the pandemic to be a major topic, especially as the president continuously downplays the virus – most recently comparing it to the flu – while he preps for the debate next week. On that note: Trump's doctor said he didn't show any symptoms yesterday. But former VP Joe Biden says if Trump's still positive for the virus, they shouldn't debate. But we digress...for tonight's debate, both Harris and Pence are prepped and ready after poring over policy briefing books, workshopping responses, and holding lengthy mock sessions. And don't expect a debate as volatile as last week's.

It's not the candidates' first experience with debates. Harris has a reputation as a tough questioner – both when she was California's AG and on the Senate Judiciary Committee. And Pence is known to be cool and calm under pressure, and he isn't likely to trigger a "will you shut up, man" comment.

One analysis found that more than four million Americans have already cast their votes in the 2020 election. And typically, the VP debates don't have much sway on voters' decisions. But with the president and his rival feuding over COVID-19, this is a chance for their number twos to show that they'd be able to suit up, lead during a crisis...and make an effective case for their bosses.

The economy. Ever since President Trump signed the $2 trillion economic aid package (CARES Act) back in March, Democrats and Republicans have been trying to hash out another COVID-19 relief bill. But they've disagreed on just about everything – much to the dismay of Fed Chair Jerome Powell, who says the US's recovery faces a serious risk if Congress and the WH don't do more to boost the economy. And President Trump sent mixed signals on relief yesterday. First, he called off all relief talks (until after the election). Then, he sent late-night tweets saying he was "ready to sign" a stimulus check bill. All of it making the possibility of additional help (think: enhanced unemployment benefits, small business aid) before November: unclear.

Psst...Here's how you can help your wallet while you wait for Congress to step in.

The House Judiciary antitrust subcommittee. Yesterday, it released a 450-page report that was months in the making – accusing Apple, Amazon, Facebook, and Google of "abuses of monopoly power" and stifling competition. The accusations: Amazon acquired competitors and mistreats third-party sellers. Apple exploits rivals with fees and gives priority treatment to its own apps and services. Facebook used a "copy, acquire, kill" pattern to buy rivals like Instagram. And Google undermines other search providers. The investigators said the companies started as "scrappy, underdog startups" but now have "too much power." The companies have all disagreed with the findings.

...Oh and speaking of Big Tech, yesterday Facebook said it's banning QAnon across all of its platforms.

Jonathan Price. Over the weekend, the 31-year-old Black man was killed by police in North Texas. Price's family said he was trying to break up a fight at a gas station when officers arrived on the scene and tried to arrest him. Authorities say Price "resisted in a non-threatening posture and began walking away." But Wolfe City officer Shaun Lucas Tasered and then shot Price. He died at the hospital. Authorities said Lucas's actions were unreasonable and charged him with murder. He's being held on a $1 million bond and could face life in prison if convicted.

Eddie Van Halen. Yesterday, the guitarist and co-founder of Van Halen died after a long battle with cancer. He was 65. The rock band was known for its hits "Dance the Night Away," "Jump," and "Runnin' with the Devil," and was inducted into the Rock & Roll Hall of Fame in 2007. Eddie Van Halen's energetic performances redefined the sound of the electric guitar in the 1970s and '80s and made him one of the most influential guitarists of his generation. His son – who played in his father's band – said "every moment I've shared with him on and off stage was a gift." RIP.

Seattle. Yesterday, the WNBA team won its fourth championship – and its second in just three years.

When working out with Jane Fonda…

Do it in style