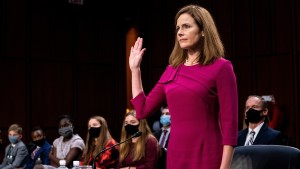 It's a big week for Judge Amy Coney Barrett.

Her confirmation hearings before the Senate Judiciary Committee. Yesterday was day one of four of the fast-tracked proceedings – which come less than three weeks after President Trump nominated the 48-year-old judge to take the late Justice Ruth Bader Ginsburg's Supreme Court seat. And the pandemic has made things interesting on Capitol Hill. Think: some showed up on Zoom, others commuted (we, too, forgot what that was like) and stayed six feet apart, some paid tribute to RBG, and others seemed to have forgotten to wear their masks...looking at you, Sen. Mike Lee (R-UT). All 22 senators on the committee gave their opening statements, as did the nominee herself. Here's what they had to say:

Judge Amy Coney Barrett…She honored RBG for "the path she marked and the life she led," saying nobody could take her place. And she gave a shoutout to her old boss, the late Justice Antonin Scalia. She said she believes policy should be decided by elected lawmakers and she'll interpret the Constitution as it was written. She also pledged "to faithfully and impartially" carry out her duties to the American people as a Supreme.

Republicans…Praised Barrett's legal record, saying she's "in a category of excellence." They defended Barrett's confirmation process amid Democrats' pleas to delay the hearings. They also accused Dems of attacking Barrett for being a devout Catholic, but no Democrats mentioned her faith yesterday. (Although they have in the past.) Senate Judiciary Committee Chairman Lindsey Graham (R-SC) said the hearings were more symbolic than anything else, since persuading the other party seemed unlikely. He added that all the Republicans will likely vote yes on Barrett's nomination, and "all the Democrats will vote no."

Democrats…Sen. Kamala Harris (D-CA) slammed the confirmation process as both "illegitimate" and "reckless." She believes (like the majority of Americans) that the next Supreme Court justice should be decided by the winner of the 2020 election, especially since more than nine million Americans have already voted. Other Dems focused on abortion access and health care – arguing that a Barrett confirmation could overturn Roe v Wade and roll back the Affordable Care Act. Both are issues Dems hope will mobilize voters on Election Day.

Barrett's confirmation process is taking place amid a pandemic and weeks before an election that could spark Supreme Court cases. She's expected to face questions on those issues – and on just about everything else – in the days ahead.

Election Day is exactly three weeks away and many Americans have already voted (early or by mail). Here's where two states stand ahead of the Nov 3 election:

California. Over the weekend, the California Republican Party faced scrutiny after setting up unofficial ballot drop-off boxes throughout Southern California and labeling them as "official." The CA Secretary of State said 'um...that's illegal.' But Republicans said they were only trying to "harvest" ballots. Now, they've been served with a cease-and-desist notice by the state. For more about how to safely return your absentee ballot, check this out.

Minnesota. Election officials there will be able to count mail-in ballots if they're postmarked by Election Day and received within a week. (Previously, the ballots had to arrive by 8pm on Election Day to be counted.) A pair of Republicans had argued the extension violated federal election law, but a judge disagreed. Now, Minnesotans' ballots won't be rejected if they arrive a few days late – as long as they're postmarked by Nov 3.

The Nagorno-Karabakh region. Over the weekend, Armenia and Azerbaijan accused each other of breaking a cease-fire. It came minutes after the two countries agreed to halt fighting in a deal brokered by Russia. Azerbaijan and Armenia have fought over the region – which is within Azerbaijan's borders but controlled by ethnic Armenians – for decades. But fighting broke out between the two sides late last month, killing hundreds of people and sparking fears of a full-blown war that could bring Turkey (a close ally of Azerbaijan) and Russia (which has a military treaty with Armenia) into the mix. Despite the cease-fire, Armenia says Azerbaijan started the violence up again, shelling parts of the conflict zone. Azerbaijan returned the blame. Now, it's unclear where the truce lies.

North Korea. On Saturday, the country unveiled what's believed to be one of the world's largest intercontinental ballistic missiles. The weapon was paraded around during celebrations for the 75th anniversary of NK's ruling Workers' Party. While it hasn't been officially tested, the missile is a reminder that North Korea poses a real nuclear threat. It's the first time the country's shown off its long-range weapons since its denuclearization talks with the US more than two years ago. US officials called it disappointing. But NK leader Kim Jong Un said it wasn't aimed at "anyone specific" and was just for self-defense. Comforting.

Who's probably dancing to Seven(teen) Rings…

The Los Angeles Lakers. Over the weekend, the basketball team won its 17th NBA championship – tying with the Boston Celtics for the most wins in the league's history. The win was especially historic as LeBron James and the rest of the team honored the late Kobe Bryant (wearing "Black Mamba" jerseys). And capped off a season dedicated not just to the game – but also to racial justice and voting rights.

Who's studying the rules of attraction…

Researchers and fans of "The Bachelorette."