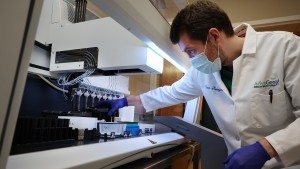 COVID-19 long-haulers are desperate for answers.

Among the tens of millions of people who've survived COVID-19, there are some who haven't fully recovered. They're known as COVID-19 long-haulers. A CDC study found that one in three COVID-19 patients still experiences symptoms (think: fatigue, shortness of breath, coughing) weeks after testing positive. For others, the long-term effects include loss of taste or smell that can date back to March. Some of these symptoms have stopped people from returning to work and doing daily tasks. But studies have found the coronavirus's health effects can go far beyond those symptoms.

It can lead to severe infections and lung and heart damage. And not just in older and middle-aged adults. The CDC says young adults and athletes are at risk too. But there can also be long-term neurological effects, something one health expert has described as "pervasive." The coronavirus has been linked to things like lack of oxygen, stroke, or encephalitis (inflammation in the brain) which can all cause brain damage. And new research is also linking it to behavioral and psychological problems, including issues with memory and attention. This can affect how recovered patients manage anything from medications, to personal relationships, to finances, and their jobs. And it's got scientists raising questions about whether this could put people at high risk for Parkinson's or Alzheimer's disease.

Experts continue to study the virus's impact long-term. But in the meantime, long-haulers can benefit from family support and early rehabilitation – something that may not be easily accessible for those who've lost their jobs and health insurance. These survivors have turned to one another on social media (like Facebook and Slack support groups) to form connections over the unknown. But several months in, it's still unclear how long these symptoms will last.

More than 1 million people worldwide have died from a virus that still isn't fully understood. As researchers race to find a vaccine, health experts warn that the virus's long-term health effects could even impact those with mild symptoms.

This year's presidential election has been anything but normal. Amid the coronavirus pandemic, the country's seeing more mail-in voting, masks on the campaign trail, and a debate with plexiglass. But come election night, the candidates might hear 'hold the acceptance speech.'

A new survey by Pew Research Center found 82% of voters think it's important for the country to know who won within a day or two of Nov 3. But only 50% are confident that this will happen. Experts and election officials have sounded the alarm too: Expect a delay in the presidential election results. And remember, that's okay.

The biggest reason for the likely delay is mail-in ballots. Millions of Americans have already voted by mail – or will soon. In some states, officials can't verify ballot signatures and open envelopes until the day of the election. And in some cases, they have to wait to count until the polls close. So, save yourself the all-nighter because it could be weeks before the election results are finalized.

Who's taking all the questions…

Judge Amy Coney Barrett. Yesterday was the last day she faced questions in her Supreme Court confirmation hearings – and she didn't get pinned down. On whether President Trump has the power to pardon himself, Barrett said it's an "open question." On voting rights, she didn't clearly answer whether a president can ban voting on the basis of race or gender, calling it a hypothetical. And on climate change, she said she didn't want to weigh in because she's "not a scientist."

Who's still being investigated…

Amy Cooper. Yesterday, the Manhattan DA revealed Cooper made a second 911 call falsely claiming a Black man was assaulting her. Reminder: Back in May, Cooper (who is white) made headlines for calling the police on Christian Cooper (a Black man) after he asked her to leash her dog in Central Park. (We know their last names are confusing, but they're not related.) Yesterday, she was in court (remotely) for filing a false police report. The DA says Amy Cooper "engaged in racist criminal conduct," and his office will hold anyone making "false and racist 911 calls" accountable. Prosecutors reportedly said they're working on a plea deal, which could have Cooper participate in a program to educate her and the community "on the harm caused by such actions."

Kyrgyzstan. Today, President Sooronbai Jeenbekov stepped down nearly two weeks after a disputed parliamentary election. Earlier this month, protests broke out after election results showed only pro-government parties had won seats in the Central Asian country's parliament. Days later, the Central Election Commission annulled the election, and opposition parties tried and failed to form a new gov. Then Kyrgyzstan's prime minister stepped down. And demonstrators and opponents have called on Jeenbekov to do the same. Now, the president's agreed to give up his seat, reportedly saying the nation's integrity and peace are "above all else."

ABC and NBC. Tonight, President Trump and Democratic presidential nominee Joe Biden will have town halls at the same time on the competing networks in lieu of a presidential debate. Reminder: The debate was canceled when Trump said he wouldn't go virtual after his COVID-19 diagnosis.

When "thunder only happens when it's raining"…