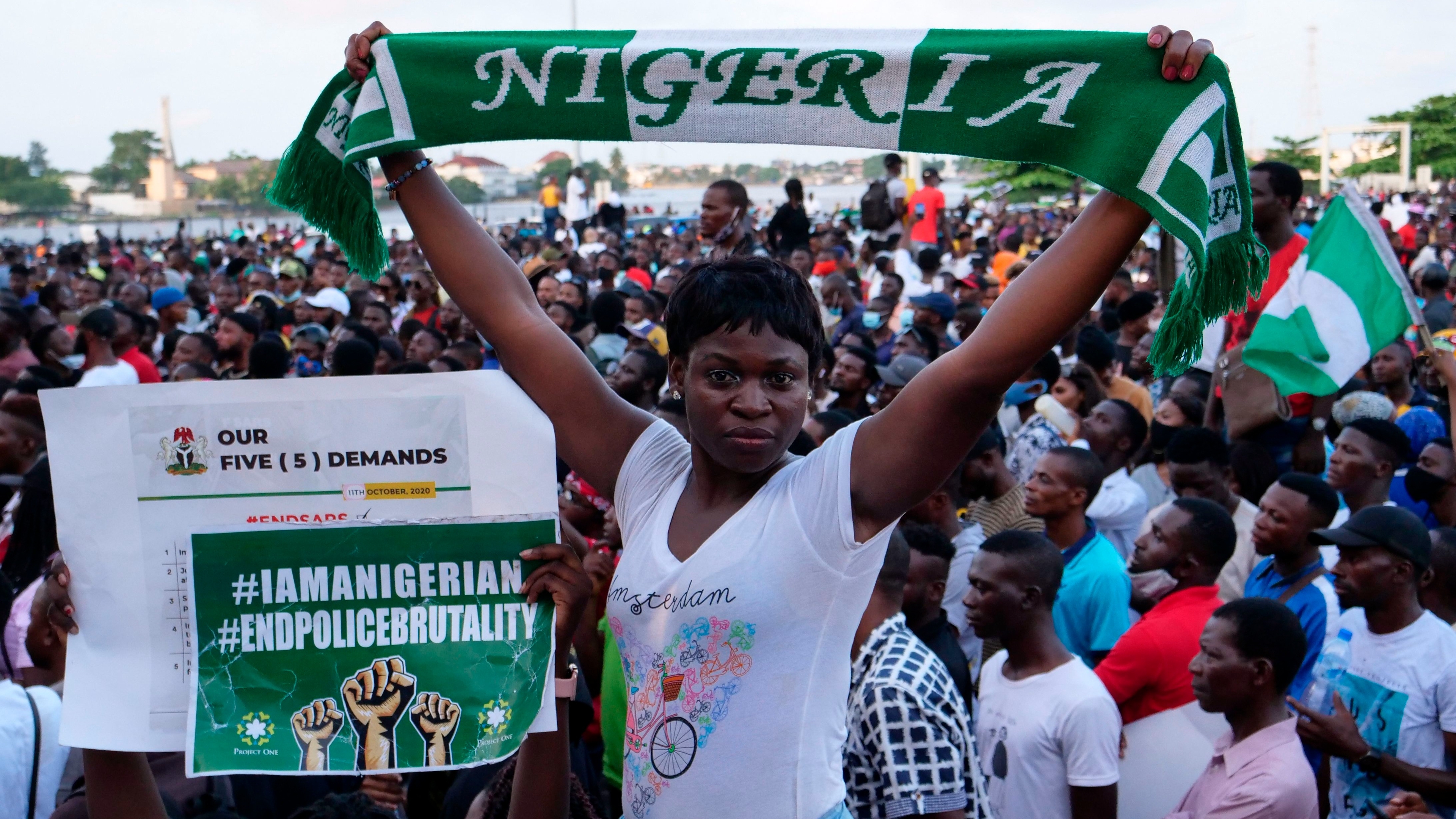 The fight against police brutality isn't just taking place in the US.

In Nigeria. For years, people there have called out recurring police brutality by the Special Anti-Robbery Squad (SARS). Created in 1992, SARS was meant to fight violent crime. And its officers operated in disguise (think: unmarked vehicles and no uniforms). Over the years, the police unit faced accusations of corruption, rape, torture, and murder. Earlier this month, a video allegedly showing SARS officers killing an unarmed man sparked protests across the country, calling for an end to police brutality. And a movement began.

It's called #EndSARS. The hashtag turned into an online campaign as some Nigerians used it to share their stories of abuse at the hands of SARS. And thousands of people across the country have taken to the streets to bring attention to reports of extortion, beatings, sexual violence, mock executions, and more. SARS has been accused of targeting young people (think: 18 to 35), who appear well-dressed or "flashy," brutalizing them for their money. Since 2017, Amnesty International has documented at least 82 cases of abuse and killings by SARS officers. And says 10 protesters have been killed by police.

The gov has disbanded SARS in response to the protests but replaced it with a new police unit called Special Weapons and Tactics (SWAT). And said it'll investigate the alleged human rights violations and bring the officers responsible to justice. But SARS has been disbanded at least three times in the past, and protesters have had enough. They want the inspector general to resign and for all arrested protesters to be released. Not helping tensions: the Nigerian military is calling for an end to the protests, and demonstrations have been banned in the country's capital amid COVID-19 safety measures. But if these last weeks have shown anything, it's that protesters aren't giving up.

Nigeria's population is one of the youngest in the world. Over 40% of the country's estimated 200 million people are younger than 15. And the youth have taken hold of the movement – using social media as a driving force that's now spread worldwide. Supporters in cities from London to Berlin to New York are protesting in solidarity. And even celebrities like Kanye West and Trey Songz are raising awareness and showing that police brutality isn't confined to the US's borders.

For too long, the deaths and abuse of young Nigerians at the hands of police were ignored. Now, Nigerians are using the #EndSARS movement to bring the brutality to light – and to demand justice.

The big race this fall is President Donald Trump vs former VP Joe Biden. But down-ballot races could have a major impact too. Take the Senate. Republicans want to keep control there, while Democrats are hoping to flip enough seats so they're in the majority. (They'll need to net three seats if Biden wins and four if Trump is reelected.) Until this year, the most money a Senate candidate raised in the last quarter before Election Day was $38.1 million. Last week, three Democratic candidates announced they'd broken that record. Here are those races:

South Carolina…Sen. Lindsey Graham (R) is trying to keep the same seat he's had for nearly two decades. He's a close ally of Trump's, and South Carolina hasn't elected a Democrat to the Senate since 1998. But Democratic challenger Jaime Harrison is inching behind him in the polls. He raised $57 million between July and September, the most of any Senate candidate in history.

Maine…GOP Sen. Susan Collins is facing what appears to be the toughest reelection battle of her career against Maine House Speaker Sara Gideon. Collins has served four terms – and is the only Republican from New England serving in Congress.

Where else people are protesting…

France. Over the weekend, protests defending free speech broke out after a teacher was beheaded in a Paris suburb. The teacher, Samuel Paty, taught a class on freedom of expression and recently showed students caricatures of Islam's Prophet Muhammad for a lesson. (Paty took the cartoons from Charlie Hebdo – a satirical magazine that suffered a terrorist attack for printing the same images over five years ago.) On Friday, a man attacked and killed Paty near the school. Police later shot and killed the suspect. Authorities said he'd claimed responsibility for the crime on Twitter, saying Paty "dared" to put down the prophet. French President Emmanuel Macron called the killing an "Islamist terrorist attack." Now, protesters are standing in solidarity with teachers and their rights to free speech and safety.

Who's feeling the love...

New Zealand PM Jacinda Ardern. Over the weekend, she won reelection by a landslide. Ardern has often been commended for her handling of the country's coronavirus outbreak (overcoming it not once, but twice). Under her leadership, New Zealand imposed one of the world's toughest lockdowns when COVID-19 reached the country. Her center-left Labour Party was also projected to win 64 seats out of the 61 needed to form a government. It's the party's highest percentage of seats in at least five decades. Ardern's promised to lead a government of transformation on the island nation. But her critics have argued she could do more to address inequality, child poverty, climate change, and the housing market.

Fair Wayne Bryant. Last Thursday, the 63-year-old Black man serving a life sentence for stealing hedge clippers more than two decades ago was granted parole. And walked out of prison later that day. Now, he heads to a program in Baton Rouge, LA, which helps former convicts transition to life outside of prison. The American Civil Liberties Union of Louisiana called the board's decision to grant parole a "long-overdue victory."

What some people are celebrating…

Their credit scores. Americans' average FICO credit score hit a record high of 711 in July, despite the coronavirus's scorching effect on the US economy and unemployment. The reason? Things like pauses on student loans and mortgages, the stimulus checks, and expanded unemployment benefits helped people pay their bills and pay down their debt.

...Oh and speaking of stimulus checks, House Speaker Nancy Pelosi (D-CA) said that the White House has until tomorrow to reach a deal on COVID-19 relief – if it wants to pass a bill before Election Day.

Psst...want an even higher credit score? We Skimm'd how to get a good one.

A lifetime of love.