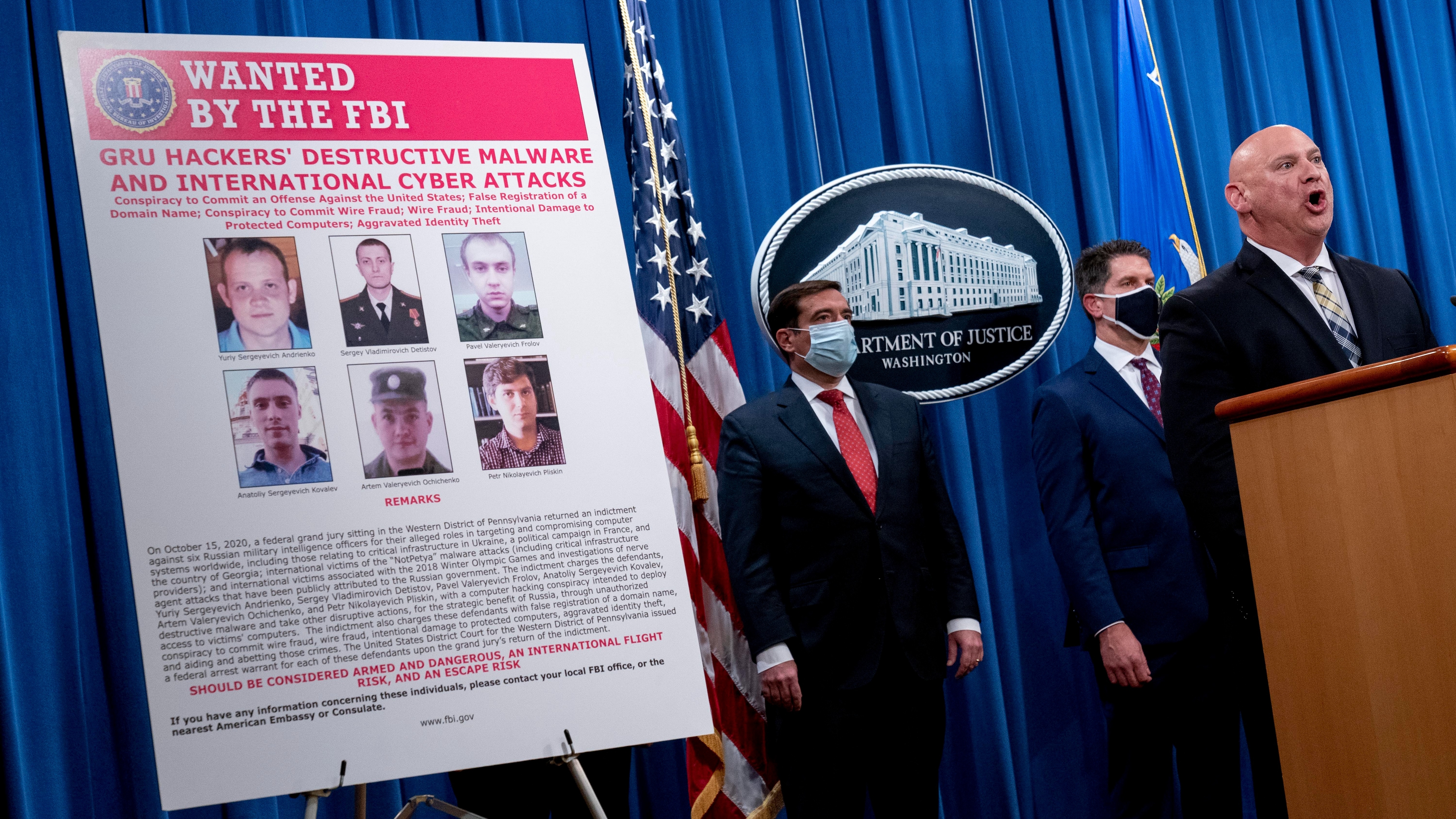 US prosecutors want to see Russian military officers in court.

Major hacking attacks. Yesterday, the Justice Department announced that six men were charged in connection to global cyberattacks. They're part of a Russian military intel agency called the GRU – the same group linked to interference in the 2016 US election. The men have been accused of forming a hacking campaign to further Russia's strategic interests. And engaging in malware and spearphishing attacks to target major global events. Like...

France's 2017 presidential election…As voting began in the spring of that year, the hackers launched spearphishing campaigns against then-candidate (now President) Emmanuel Macron. They allegedly stole documents and leaked emails in an effort to tarnish his campaign, as he was running against far-right candidate Marine Le Pen – who had Russia's support.

UK poisoning…In 2018, the hackers allegedly tried to interrupt international and UK investigations into the Novichok poisoning of former Russian spy Sergei Skripal and his daughter. Reminder: Novichok is a nerve agent and illegal chemical weapon, which was recently used to poison Russian opposition leader Alexei Navalny. Experts have attributed all three poisonings to the Kremlin.

2018 Winter Olympics…Russia was banned from the 2018 Olympics after a major doping scandal. In retaliation, the hackers tried to punish Olympic organizers – targeting the opening ceremony of the games. And trying to make it look like North Korea was responsible. They also used spearphishing campaigns and malicious mobile apps to target South Korean citizens, Olympic athletes, partners, and visitors in South Korea.

Ukraine...Between December 2015 and December 2016, hackers began using malware attacks against Ukraine's electric power grid, causing widespread outages. Some cyber experts say Russia uses Ukraine as a test for cyberattacks on other countries and adversaries. They've also unleashed wave after wave of attacks on Ukraine including NotPetya – one of the "world's most destructive malware" that's spread to computers around the world, causing billions of dollars in damages.

These hacks seem to show Russia's increasingly aggressive tactics in trying to harm its adversaries and push forward its political agenda worldwide. Recently, the country's also been accused of trying to hack Americans, Microsoft, and orgs researching COVID-19 vaccines. But even though US intel officials believe Russia is trying to influence the election in favor of President Trump, there was no mention of a potential 2020 election hack in the indictment. Russia's denied the allegations – and it's apparently unlikely the suspects will be extradited to the US.

Given the multiple warnings and threats of Russia's hacking potential, Americans are on high alert for November 3. Election safety and cybersecurity are crucial. And the DOJ is making a move to hold hackers accountable.

Let's talk about polling numbers. They're meant to provide a peek into how a candidate stacks up ahead of the election. This time in 2016, polls showed then-Democratic candidate Hillary Clinton had a 70-99% chance of winning the election. Clearly, that didn't happen. So what gives?

A case study: Analysts found the 2016 polls failed to take into account a voter's education, among other things. Those with four-year degrees tend to favor Democrats and are more likely to take surveys. The result: many polls ended up overestimating Clinton's support. And underestimating then-candidate Donald Trump's. Some pollsters have also suggested that people weren't always honest about who they were voting for (think: "shy Trumpers").

Lessons learned?: Some news orgs and pollsters are changing things up – reportedly doing away with prediction needles. And sharing different models of what the race could look like. Others are taking voter turnout into account, and how it could be underestimated because of the pandemic. But remember, polls are just predictions based on a number of factors, and aren't always correct. The bottom line: Make sure to get your voice (and your vote) heard. We've got tips here.

What's on the court docket…

Immigration. Yesterday, the Supreme Court agreed to take up two of the Trump admin's immigration initiatives. One concerns funding for a wall along the US-Mexico border. The other on a policy that's forced about 60,000 asylum seekers to stay in Mexico while their claims are processed. Both have faced back-and-forth legal challenges, and the Supremes now plan to take a look (though the cases likely won't be heard until next year). Here's what's in question:

Where there's apparently a new president in town…

Bolivia. Earlier this week, Bolivians went to the polls to make their presidential pick. A huge deal for a country that's still reeling from last year's election fiasco. Reminder: Claims of vote-rigging led to massive protests and President Evo Morales resigned and fled to Mexico. He's now living in exile in Argentina. This year, after postponing the election twice because of the coronavirus, the results show that Morales's socialist party was victorious – with presidential candidate Luis Arce securing over 50% of the vote. The final tally isn't in yet but his rival – centrist former President Carlos Mesa – conceded.

Where there are election updates…

Pennsylvania. Yesterday, the Supreme Court said it'll allow the state to count mail-in ballots that are received up to three days after Election Day – as long as they're postmarked by Nov 3. (If a postmark isn't clear, they could still be counted.) PA's Democratic Secretary of State had requested extending the deadline, and the state Supreme Court agreed. But Republican lawmakers asked SCOTUS to block the decision – saying the legislature should get to make voting rules. The justices were evenly divided (4-4), meaning the lower court's ruling stands.

Who's getting ready to go to bat…

The Tampa Bay Rays and Los Angeles Dodgers. The two teams face off in Game 1 of the World Series tonight at the Globe Life Field in Texas. Play ball.

Skimm More: One thing that's better than peanuts and Cracker Jack? theSkimm App. It syncs our calendar with yours so you never miss out on major sports games, holidays, awards shows, and more. Download it here.

While this star pulled out from "The Notebook"...

This cast is getting ready to write in theirs.

When some are having turkey for Thanksgiving...

Others are bringing the chicken.