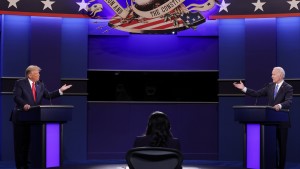 That's why we're here. Last night, President Trump and former VP Joe Biden took the stage for their last debate of the 2020 election. With less than two weeks until Nov 3, they each made their pitch for the top job spot. This time, no dumpster fire. (Thank you, mute button.) And they covered a lot of topics, like…

COVID-19…As cases rise in dozens of states, Trump says that the virus he recovered from "very fast" is now "rounding the corner." And that a vaccine will be announced within weeks. (But no promises.) He pushed for schools to reopen and said the risk of transmission to teachers is low. Biden warned that the country's entering a "dark winter," reminding Americans that another 200,000+ people could die from COVID-19 in the next few months.

National security…Election interference from Russia and Iran was top of mind. Biden said those responsible would "pay a price." And pointed the finger at Trump for not confronting Russian President Vladimir Putin. Trump said 'nyet fair.' But when it came to Kim Jong Un, the president said he's "different" – and that being friendly with a nuclear power isn't such a bad thing.

Health care…It was a big topic. Trump wants to "terminate" the Affordable Care Act. And said he'd figure out a way to help the 20 million people who'd lose their coverage if the law's struck down, including those with pre-existing conditions. Biden said health care is a right, "not a privilege," and introduced "Bidencare" (aka Obamacare + a public option).

Immigration…Trump said the admin is "trying very hard" to reunite hundreds of children separated from their parents because of his "zero tolerance" policy at the border. And called the "catch and release" policy a disaster. Biden said it was "criminal" that families were separated in the first place. And that he and President Obama "made a mistake" in not delivering on immigration reform – but that he'd get right to it within his first 100 days in office.

And everything else…Hunter Biden's laptop got some shoutouts. So did Abe Lincoln. Biden channeled Obama's line on not seeing "red states and blue states." Trump's not a "typical politician." Biden couldn't resist a "malarkey" reference. Trump doesn't want any birds to get hurt. And moderator Kristen Welker got props for not letting things go off the rails.

The last debate of the election season was less chaotic than the first. But voters heard two different versions about what's at stake. For Trump, he boiled it down to the economy. For Biden, it's the country's character. For voters, it's about what the next four years will look like.

It's T-11 days until Election Day. And over 45 million Americans have already checked 'vote early' off of their to-do lists – either by mail or in-person. That's a record high. For reference, one report found only six million people had voted by this time in 2016. We're not mathematicians, but 2020 is bringing in more than seven times that.

Election experts say the numbers show a level of civic engagement and enthusiasm that hasn't been seen in years. (Talk about making democracy proud.) And the numbers are only expected to grow, as more states (hi, New York) kick off early voting in the coming days. Oh and, Americans around the country will be celebrating the first-ever Vote Early Day tomorrow.

We spoke to influential women across the political spectrum about how they're voting. Check out these tips from Sen. Marsha Blackburn (R-TN), Hillary Clinton, and Meg Whitman on getting those ballots in.

Who's reaching the finish line…

Judge Amy Coney Barrett. Yesterday, the Senate Judiciary Committee sent her Supreme Court nomination to the Senate floor. Every Republican on the panel voted in favor. And every Democrat on the committee boycotted the vote. On their empty seats, they left poster-size photos of Americans who could be impacted if SCOTUS strikes down the Affordable Care Act. Reminder: Dems have called Barrett's confirmation process a "sham." And say that she would put the ACA at risk in the middle of a pandemic. Republicans say Barrett's "exceptionally qualified" to serve on the court. The full Senate is expected to vote on her confirmation on Monday. A resounding 'yea' could result in Barrett becoming the first justice in history confirmed so close to an election.

Ghislaine Maxwell – Jeffrey Epstein's former girlfriend and longtime associate. Reminder: Epstein – a well-connected multimillionaire – was charged with sex trafficking in 2019. He died by suicide in prison a month later. Maxwell was accused of helping him run a sex trafficking ring and was arrested over the summer. Yesterday, after a long legal battle, a deposition Maxwell gave in 2016 was released. (It was part of a defamation case brought by Virginia Giuffre – an alleged victim of Epstein's.) In it, Maxwell repeatedly denies helping Epstein run a sex trafficking ring, recruiting underage girls or introducing Giuffre to a man believed to be Prince Andrew. She is still awaiting trial next year.

Whose case has an update…

George Floyd's. Yesterday, a Minnesota judge dropped a third-degree murder charge against ex-Minneapolis police officer Derek Chauvin. But said there's enough probable cause for second-degree murder and manslaughter charges against him for prosecutors to go to trial. Floyd died in May after Chauvin pinned him to the ground for at least eight minutes as Floyd repeatedly cried out "I can't breathe." Chauvin's trial is scheduled for March.

Who's getting a new co-worker…

The World Health Organization. Yesterday, it announced that it'll collaborate with Wikipedia to fight misinformation surrounding the coronavirus. The WHO will let Wikipedia use its infographics and videos to give the public the latest info on COVID-19.

What could be the scariest Halloween costume this year…

What can cure feelings of nostalgia...