Daily Skimm: France Refuses to Give in, 2020 Election Candidates Focus on FL, and Elephants Squish the Squash 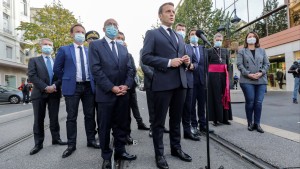 France is under attack.

Yesterday, the country suffered multiple attacks in just under 24 hours. In Nice, three people were killed in a knife attack at a church. On the same day, a man carrying a knife was arrested near a train station in Lyon. A similar thing happened in Avignon (about 150 miles away) and the suspect was killed. Then, a man was arrested after attacking a guard outside the French consulate in Saudi Arabia. Officials believe the incident in Nice was an act of terrorism. But it's unclear if that event is linked to the others. These are the latest in a string of attacks that have hit the nation as it puts up a united front against censorship from Middle Eastern countries.

How is that related?

First, some background. Although the Quran does not explicitly forbid images of the Prophet Muhammad, many Muslims say depictions (think: paintings, statues, caricatures) are blasphemous, offensive, and prohibited. In 2015, two brothers killed 12 people at the offices of Charlie Hebdo (a French satirical magazine) after it published caricatures of the prophet. Last month, a man attacked bystanders outside the magazine's former offices with a butcher knife. And just two weeks ago, Samuel Paty (a teacher), was beheaded in a Paris suburb after showing his students cartoons of the prophet during a lesson.

After Paty was beheaded, President Emmanuel Macron openly backed free speech and the caricatures. Some of which were also set up on gov buildings. And French citizens stood together and marched with signs reading "Je suis Samuel" (I am Samuel) in solidarity – as they did with "Je suis Charlie" in 2015. France's stance has angered many Middle Eastern countries, who've criticized Macron and called for a boycott of French products. Turkey's president suggested Macron should get his mental health checked. And an Iranian newspaper depicted him as the devil.

But European leaders rallied behind the French president as he doubled down on the country's refusal to give in. He said the recent incidents should unite the nation and urged people to not succumb to the "spirit of division." Several Middle Eastern countries condemned the recent attacks that were "under no circumstances" justifiable. And President Trump said the US stands with France.

France has long adopted secularism as its way of life, separating religion from the state. And while it battles a second wave of coronavirus, its battle for free speech seems to be never-ending.

It's coming down to the wire, and the presidential candidates are using the last weekend before Election Day to win over voters in battleground states. Here's how they're spending their last days on the campaign trail:

President Donald Trump...Yesterday, he held a rally in Tampa, FL – a key swing state. Reminder: No Republican in recent decades has reached the Oval Office without winning Florida. Today, VP Mike Pence will be in Flagstaff and Tucson, Arizona, to garner support at two rallies. Meanwhile, Trump will be in the Midwest making stops in Michigan, Wisconsin, and Minnesota. (Yup, that's all in one day). Followed by Pennsylvania tomorrow. A point he's expected to make: the economy's recovery amid the pandemic.

Former VP Joe Biden...He, too, made pit stops in Florida ahead of the final campaigning weekend. Today, Sen. Kamala Harris (D-CA) is campaigning in Texas. And Biden is expected to tour Minnesota, Michigan, Iowa, and Wisconsin – states where he's trying to rebuild the "blue wall." The former VP has called in reinforcements: former President Barack Obama (and friendship bracelet BFF), who Democrats hope may motivate Black men, Latinos, and younger people to vote Dem.

In the final days before you say 'I choose you,' don't forget to double check your polling location and hours. We can help you plan here

What's also got people zeroed in on Florida…

Memories of the 2000 election. This year's presidential contest could get...wild (one poll shows Biden and Trump head-to-head among voters in some states). So, many are wondering whether we could see a repeat of what happened two decades ago. And since most millennials were youngins when Bush v. Gore happened, we're recapping the controversial decision:

The US. Yesterday, the country surpassed 9 million coronavirus infections – the worst in the world. And reported its single worst day of cases since the pandemic began with one report putting the number at over 86,600. Infections show no signs of stopping. Another analysis found 41 states have seen at least 10% more new COVID-19 cases this past week when compared to the week prior. And experts worry things could get worse as the weather gets colder and people spend more time indoors.

The Trump admin. Earlier this week, it announced it's lifting Clinton-era protections for Alaska's Tongass National Forest. (Aka the "lungs of the country.") Now, the WH has opened it up for road construction and logging. It's reportedly the admin's most sweeping effort to roll back protections for public lands. The forest's 17-million acres are home to a variety of wildlife: brown bears, deer, and salmon. And some of its trees are up to 1,000 years old. Scientists criticized the move, saying the forest was "America's last climate sanctuary." But supporters say the rollback will help boost Alaska's economy.

Where people are reeling…

The South. At least six people have been killed after Hurricane Zeta made landfall, leaving behind a trail of destruction. About 2 million people are still without power across several southern states. The storm also disrupted some Georgia polling stations that were open for early voting. Zeta set a new record as the 11th named storm to make landfall in the US in a single season.

This display is acting 'bad to the bone.

Who's giving her "pov" on switching positions…