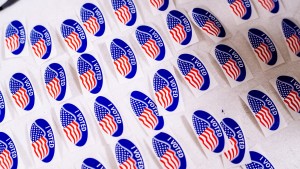 We still don't have the answers you seek.

We know. Election night was a lot. As Americans woke up from their post-election hangover, the race between President Donald Trump and former VP Joe Biden was a nail-biter...it still is.

But I thought Biden won a couple of big states yesterday?

He did. Wisconsin and Michigan – states that his campaign invested a lot of time and energy to win back in order to rebuild the "blue wall." He's now in the lead with 253 electoral votes, compared to Trump's 214. Meaning: Biden only needs 17 more to add 'POTUS' to his resume. But five battleground states (PA, NC, GA, AZ, NV) are still too close to call, plus we still haven't heard from Alaska. And Trump's team isn't going down without a fight.

The president and his campaign are already disputing the results of several states. In Wisconsin, the Trump campaign is claiming there are some "irregularities" and asking for a recount. Trump is technically allowed to call for one since Biden is winning within a 1% margin (think: around 20,000 votes). But experts say a recount – which is expensive – rarely changes the outcome.

Yup. Trump's legal team is also suing to stop mail-in ballots from being counted in Pennsylvania and Michigan until it's given access to review the states' counting processes. His campaign is also suing a county in Georgia to try to separate absentee ballots it says arrived after the voting deadline to ensure they're not being counted.

So are we officially in a contested election?

TBD. If Biden wins, Trump could contest the results. But both candidates still have a path to victory. And there's still a potential the election could end up in a tie.

Hold on, channeling our inner Steve Kornacki. So there are a few ways things could play out:

1. If Biden wins Arizona and at least one other battleground state he'll get to the 270 electoral college votes needed to win.

2. If Trump wins Pennsylvania, North Carolina, and Georgia. Plus either Nevada or Arizona, he'll go over the 270 threshold needed to win.

So what's going to happen?

That's what we'd all like to know. Nevada and Arizona could release results today. And the other states might take a little longer.

Geez. What about the other seats?

The Senate is still too close to call. But after incumbent Sen. Susan Collins (R-ME) defeated Sarah Gideon (D), the Dems' chances of taking back the Senate are slim to none. In the House, Republicans have gained at least three seats but Democrats still seem to have retained the majority. If Republicans want to take the House they'd need to flip over a dozen seats, and most of those races are still too close to call.

We were warned that the election was not going to be over in a night. But as the days drag on and the Trump campaign's lawsuits start to pile up, states are not only feeling the pressure to count votes quickly but whether to count some votes at all. Lawmakers on both sides of the aisle are urging Americans to stay patient and that all voters deserve to be heard.

Earlier this week, the USPS said that about 300,000 mail-in ballots in multiple states were untraceable (think: they didn't have a scan proving delivery). This worried many, including a DC federal judge, who ordered the postal service to sweep mail facilities across 15 states for those ballots. And told the agency they were due before polls closed on Election Day.

But the USPS said it couldn't meet the judge's deadline even if it tried. Because it would disrupt Election Day operations. But it went ahead and began the search.

Yesterday, the USPS said it finished its sweep and that it only found at least 12 ballots in Pennsylvania and over 800 in Texas – all have been expedited for delivery to election offices. But it was too little too late for the judge who criticized the agency for missing the Election Day deadline. And threatened to call Postmaster General Louis DeJoy to court.

This is the latest controversy surrounding the USPS after it changed its mail processing rules earlier this year. Now, the agency's facing renewed criticism for cutting costs that may have slowed down mail delivery, especially in key swing states, where every vote is under scrutiny.

Who's celebrating a victory…

Rideshare companies. On Tuesday, California voters approved Prop 22 – a ballot measure that allows gig workers to be classified as independent contractors and not employees. Reminder: In January, a CA state law went into effect requiring gig-economy companies to classify their drivers as employees, granting protections like minimum wage, overtime, and other benefits. But the rideshare companies argued it would mean raising fees and laying off workers. And lobbied for Prop 22. Now, after a long legal battle, Uber, Lyft, DoorDash, and the like are claiming victory. But critics say it will leave thousands of CA workers without basic rights or protections.

The US. Yesterday, it officially left the Paris climate deal. In 2015, nearly 200 nations agreed to do their part to reduce greenhouse gas emissions. But two years later, President Trump announced the US preferred to fly solo, and bowed out of the accord. Now, after a lengthy process, one of the world's biggest and most powerful economies has left, raising questions about the agreement's future. And about the future of climate change – since the world's second-largest emitter of greenhouse gases doesn't seem to see it as a priority.

Psst...here's how climate change can affect your wallet. And what you can do about it.

COVID-19. Yesterday, the US topped 100,000 new daily coronavirus infections for the first time – breaking grim records once again. And at least seven states set records for COVID-19 hospitalizations. For weeks, experts have warned that the number of cases would increase as temperatures drop and people move indoors. The rising cases suggest that a fall surge may be in full swing. The US's growing outbreak comes as Europe struggles to combat a second wave, and as England has entered a second lockdown.

Who's not watching election results...