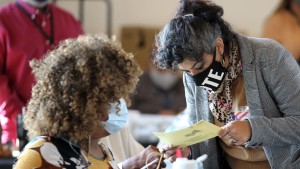 America's on the edge of its seat.

In terms of finding out who the next president is: no. But battleground states are busy counting eligible ballots. Except for Nevada, unclear what it's doing. At this hour, former VP Joe Biden is still leading with 253 electoral votes – compared to President Trump's 214. And while Biden has an easier path to 270, the race is still too close to call. Here are the states Americans (and the world) are waiting on:

Georgia (16 electoral votes): Where things took a crazy turn. Trump initially had a hold of the state, but early this morning, Biden took the lead (by just under 1,000 votes). While the counting isn't over yet, many of the remaining ballots are in counties that reportedly lean Democratic.

Pennsylvania (20 electoral votes): The biggest electoral prize left on the table. Officials say they could finish counting "the overwhelming majority" of votes by today. Trump is leading there by a slim margin, but it's been consistently shrinking. All eyes are on the Keystone State because if Biden ends up with the win, he wins the Oval.

Arizona (11 electoral votes): Biden's lead is narrowing (think: less than 2%). And we're still waiting for ballots to be counted including in Maricopa County, the state's most populous county. Earlier this week, some news outlets projected Biden had won the state after an analysis of Arizona's remaining ballots showed Trump couldn't catch up. But many sources are still waiting as the count continues in the historically Republican state.

Nevada (6 electoral votes): Aka the one that's taking its time. Biden's slightly ahead in the Silver State...but not by much (think: less than 1%). Election officials have been releasing results here and there. But a final tally isn't expected until next week as the state waits for absentee ballots.

North Carolina (15 electoral votes): This one's looking like a Trump win. But the state won't release any more results until next week. Meaning: if other states sway the election sooner, NC might miss out on all the fun.

Alaska (3 electoral votes): This isn't a battleground state, but every vote counts. The state's largely expected to go to Trump once the results are in.

What are the candidates saying?

Biden's calling for every vote to be counted. Trump is doing the exact opposite. Last night, the president made baseless claims about election fraud and corruption in the mail-in ballot process. Election observers say there's been no evidence of that in this election. And while some Republicans spoke out against this dangerous rhetoric, GOP leadership did not. In the middle of a pandemic, millions of Americans preferred to cast their ballots through the mail. But for months now, Trump has discouraged his base from doing the same. So it comes as no surprise that mail-in ballots (the majority of the votes we're waiting for states to still tally up) have leaned blue. Now, as Biden sits in the lead, Trump's campaign has filed lawsuits to stop states from counting votes. All the while, Americans are feeling the dueling messages and both sides have taken to the streets to protest in cities like New York, Minneapolis, Detroit, and Phoenix.

The presidency is still hanging in the balance, leaving the US in a state of angst. And while a winner could be announced this week, there are growing concerns that Trump's comments are triggering doubt in our democracy, inciting violence, and raising questions about a peaceful transfer of power.

PS: This is a developing story as election results continue to trickle in. Follow us @theSkimm for the latest.

Eyes on the Prize

As Americans wait for voting results, there's a lot of attention surrounding mail-in ballots and making them count. Here are the people making sure that happens...

Meet: Election observers. They can be made up of different parties and independent organizations. Some are even international orgs that have been on the ground monitoring election procedures to make sure there's a democratic process in place. Candidates can also send people to watch the votes being counted to make sure there's 'no funny business.'

Fun Fact: Since 2002, the US has worked with OSCE, a security-oriented intergovernmental organization made up of 57 nations. They send election observers to participating countries around the world including the US. In total, they have monitored nine American elections, including midterms.

Europe. Yesterday, Italy reported its highest daily death toll since the spring – 445 deaths. A grim record for a country that was Europe's first hotspot during the first wave. And in Greece, the gov's planned another strict lockdown starting tomorrow to prevent hospitals from being overwhelmed.

The US. Yesterday, the US beat its own record for the number of new daily coronavirus cases. This time, the number's up to more than 117,000 – the highest ever recorded worldwide.

Who's in the spotlight…

Kosovo's president. Yesterday, Hashim Thaçi resigned to face charges of war crimes and crimes against humanity. Back in June, The Hague indicted Thaçi for crimes that date back to the country's independence war from Serbia in the late '90s. More than 10,000 people – mostly ethnic Albanians – were killed and an estimated 1 million were displaced. Thaçi was a commander in the Kosovo Liberation Army (KLA) during the war. Prosecutors say that he and other KLA members had persecuted, tortured, and murdered hundreds of Serb troops, civilians, and political opponents. Thaçi said he resigned to preserve the presidency's integrity and reportedly said that "Kosovo has been the victim. Serbia has been the aggressor.

Who's not giving up their shot…

Puerto Rico. Earlier this week, it voted 52% to 48% in favor of joining the US as the 51st state. Reminder: Puerto Rico's been a US territory for over a century, and while its inhabitants pay some US taxes, they aren't allowed to vote for the president or in Congress. This is Puerto Rico's sixth attempt to make this happen, but it's up to Congress to actually roll out the welcome mat. For several years, congressional Republicans have dismissed the move – claiming it would only add more Dem lawmakers to the gov. (Note: Puerto Rico's former governor has said the territory is more likely to be a swing state.) TBD what Congress does this time around.

What you can look forward to this weekend…

And in the future.