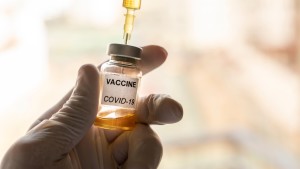 An experimental coronavirus vaccine is giving the world a shot of hope.

Yesterday, pharma giant Pfizer announced that its COVID-19 vaccine trial was over 90% effective in preventing the virus. And it has not produced any serious safety concerns. The company's vaccine trial is in Phase 3 and involves more than 43,000 global volunteers. Now, early results suggest their vaccine is working – putting Pfizer at the top of a global vaccine race.

Pfizer's trial continues. In the meantime, it's planning to go to the FDA for emergency use authorization. For context: regulators already said they would approve a vaccine if it was 50% effective...and this is claiming to be more than 90%. The company is also feeling optimistic enough that it's even started manufacturing it. And says it expects to provide up to 50 million doses worldwide this year (yes, as in less than two months) and up to 1.3 billion next year.

The stock market definitely thinks so. As do some health experts and scientists. But other experts are warning everyone to 'chill' – saying that more data is needed and the vaccine still hasn't crossed the finish line. Also, it's good to remember that even when there is a vaccine each person will need two doses. And countries could decide who gets first dibs (think: elderly, essential workers). Meaning, it could be a while before everyone who wants a vaccine can get one.

But still, I'm happy to even be talking about vaccines.

Same. And some are trying to take credit for it. VP Mike Pence said it's all thanks to President Trump's Operation Warp Speed – a federal program meant to get Americans access to a vaccine ASAP. But a Pfizer official said 'I would very much like to be excluded from this narrative.' And added that the company did not take any federal money to help the vaccine's research and development. Meanwhile, Trump claimed that Pfizer lacked "courage" and purposefully didn't reveal the good news before the election. But Pfizer's CEO has said the move wasn't political. President-elect Joe Biden also weighed in, praising the potential vaccine but cautioning Americans to not let their guard down and to wear their masks. He also announced a 13-member coronavirus task force of health experts who he says will advise him throughout the transition and help him hit the ground running on day one.

The coronavirus pandemic has claimed over 1.2 million lives and infected more than 50 million people worldwide. And it's not over yet. Cases are on the rise, with some European countries going back into lockdown. This vaccine is offering a glimmer of hope at a time when the entire world needs it.

Thing to Know: It can typically take 10-15 years to create a vaccine. Here's how scientists are speeding up the process to address the pandemic.

The election. Yesterday, Attorney General William Barr appeared to throw support behind President Trump's allegations of voter fraud. The lead Justice Department official sent out a memo to US attorneys, allowing federal prosecutors to look into "substantial allegations" of voting "irregularities"...if they exist. The unusual move led to the prompt resignation of the department's election crimes director – who stepped down from his position in protest. For days now, Trump has refused to concede the election to President-elect Joe Biden and has repeatedly made claims about election interference and voter fraud. We've said it before, we'll say it again: top election officials have not reported any widespread issues of fraud, and neither the president nor Barr have brought any hard evidence to the table.

A new coworker. Yesterday, Trump gave Defense Secretary Mark Esper the pink slip on the little blue bird. The two had been at odds for a while and things got worse this summer when Esper disagreed with sending troops to several racial justice protests around the country. It doesn't sound like Esper will lose too much sleep over it, he reportedly already had a resignation letter saved in his drafts. Now, Trump is calling on Christopher Miller – the director of the National Counterterrorism Center – to take Esper's place "effective immediately."

The Affordable Care Act. Today, the Supremes will hear arguments on the Obama-era health care law. Reminder: The ACA was passed in 2010 and gave more than 20 million Americans access to health care. But Republicans have argued it's a prime example of federal gov overreach. And have been trying to legally chip away at it. Back in 2017, Congress ended the individual mandate (think: financial penalty for not buying health insurance). And earlier this year, the Trump admin said 'why not get rid of the whole thing.' This is the latest major challenge to the law to make its way to the Supreme Court.

Psst…here's how repealing the ACA could affect your wallet, even if you get health insurance through work.

The Nagorno-Karabakh region. Yesterday, Armenia, Azerbaijan, and Russia signed a peace deal to end the ongoing war over the disputed area. Reminder: The territory is within Azerbaijan's borders but is controlled by ethnic Armenians. And the two countries – both former Soviet republics – have been in a decades-long conflict over it. In September, the fighting began (the worst seen since 2016) raising concerns about stability in a region that serves as a major route for oil and gas. Thousands of people are feared dead. Now, Armenian forces will turn over control of some areas it held in and around Nagorno-Karabakh. And nearly 2,000 Russian peacekeepers will be deployed in the region.

Who's trying to get out of the waiting room…

Zoom. Yesterday, the Federal Trade Commission announced that it reached a settlement with the video conferencing app we all seem to live on now. The FTC accused Zoom of putting users' info at risk, secretly installing software, and opening the door to "Zoombombing." Now, with this settlement, Zoom promises to 'do better' and implement new programs for extra security (think: multi-factor authentication).

What is Christmas Day?