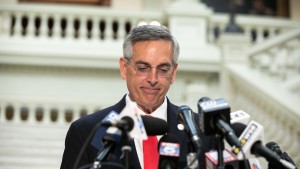 Georgia's going to be recounting presidential votes in the state...by hand.

Neither President-elect Joe Biden nor President Donald Trump have won the Peach State's 16 electoral votes...yet. Right now, Biden's leading in the state by over 14,000 votes, but the race is considered too close to call. And yesterday, Georgia Secretary of State Brad Raffensperger (R) announced a manual recount. While the Trump campaign and the Georgia Republican Party had called for one, Raffensperger says the real reason behind the recount is the "closeness of this race."

Georgia's hoping to start the recount as early as this week. And has a deadline of Nov. 20 – when the state's election results have to be certified. Officials have said it's unlikely to change the results (aka Biden's lead). No matter what happens, Biden already has enough electoral votes to secure the presidency. But still, the recount puts even more attention on Georgia, where two Senate races are facing a runoff election (think of it as a rematch, since no candidate reached the criteria needed to win) in January. Democratic challengers Raphael Warnock and Jon Ossoff are trying to unseat Republican incumbent Sens. Kelly Loeffler and David Perdue respectively. And remember: whoever wins in Georgia could help solidify control of the Senate.

And what's the update on Trump?

He's still refusing to concede. And is doubling down on his claims that voter fraud is behind Biden's win. His campaign is moving forward with additional legal action to challenge the results – after lawsuits in Georgia and Michigan have already been shut down. To be clear: US election officials and a team of international election observers have said there's no evidence of voter fraud. But members of Trump's Cabinet seem to have his back. Earlier this week, Secretary of State Mike Pompeo refused to acknowledge Biden's win, saying "there will be a smooth transition to a second Trump administration." But their former colleagues aren't staying silent, saying that Trump's allegations are "efforts to undermine the legitimacy of the election and are unacceptable."

What's Biden saying about all of this?

Well, he thinks Trump's refusal to concede is "an embarrassment." And his transition team is considering legal action against the General Services Administration (the federal agency that helps oversee the transfer of power) because it has yet to officially recognize him as the winner. It's blocking him from getting $6.3 million in funds for his transition or from receiving any presidential briefings that the president-elect would usually get. But it's not affecting his transition plans that much. Yesterday, Biden named his longtime aide Ron Klain as his chief of staff and he hopes to announce more members of his Cabinet before Thanksgiving.

While Biden is forging ahead with his transition plans, Trump is still refusing to accept the election results – fueling speculation among his supporters that an American election was rigged by an opposing party. Not only is this false, but it's dangerous rhetoric at a time when the country is already deeply divided.

COVID-19. Cases around the world are spiking again, including in the US. Earlier this week, we learned that the US surpassed 10 million cases – just ten days after hitting 9 million. Now, one health expert is warning that the US is on track to topping 200,000 new cases a day, after recording over 100,000 for at least eight straight days. And we're learning that hospitalizations are breaking records too. One analysis found that nearly 62,000 patients in the US were hospitalized with the virus – an all-time high and a 40% rise from two weeks ago. The West and Midwest are being hit particularly hard, but the virus's surge is widespread. Yesterday, Texas became the first state to surpass more than 1 million coronavirus cases. Meanwhile, California and New York are issuing new restrictions to combat the virus (think: things like stopping or limiting indoor dining and capping get-togethers at 10 people).

Where people are saying 'we're not gonna take it'…

Hong Kong. Yesterday, all of Hong Kong's pro-democracy lawmakers announced they're resigning in protest after four colleagues were expelled for allegedly being unpatriotic. The series of events came after China passed a resolution that allowed removing lawmakers who are believed to promote or support Hong Kong's independence, or who don't show clear loyalty to Beijing. Now, opposition lawmakers say the entire legislature is compromised. And called it another move against the "one country, two systems" agreement that provided greater autonomy from China. The Hong Kong gov appeared to be unbothered by the resignations.

Pope John Paul II. Earlier this week, a Vatican investigation revealed the late pope overlooked sexual abuse claims against ex-Cardinal Theodore McCarrick. Last year, Pope Francis defrocked McCarrick – a former Washington, DC archbishop – after a trial found him guilty of sexually abusing minors. Now, an explosive report has found that bishops, cardinals, and popes downplayed and dismissed the allegations against him. And instead, allowed McCarrick to rise through the ranks. Francis – who was largely spared in the report – has doubled down on ending sexual abuse in the church.

Who's singing 'there must be another way'...

Britney Spears. After months of trying to take back control of her personal and professional life, the singer is back to square one. Earlier this week, a Los Angeles judge declined to remove her father as the head of her estate...for now. Since 2008, Spears's dad has had conservatorship over the pop star's career and personal life, following her 2007 public breakdown. Now, Spears's lawyer said she "will not perform again" as long as her dad's in charge of her career.

Who's getting ready for part deux…