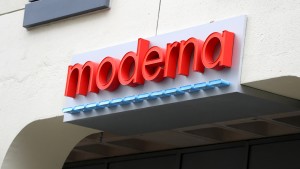 Please Sir, I Want Some Approval

Yesterday, Moderna asked the FDA and European regulators for the green light to start distributing its COVID-19 vaccine. The move came weeks after the company shared early results from a small sample of its 30,000-person trial. Now it's released the final results. Turns out, it's 94.1% effective at preventing people from getting the virus. And 100% effective at preventing severe cases. (Sigh of relief.) If approved, Moderna says the two-dose vaccine could be ready around mid-December and would cost between $32 and $37 per dose.

Will there be enough for everyone?

In time, yes. Today, a CDC advisory panel is expected to meet to discuss which groups of people should get the first doses of the vaccine. Ultimately, state govs will be the ones to determine who's at the top of the list. And guidance from the CDC and health officials could influence their decisions. But analysts say the estimated 21 million health care workers and nursing home residents and staff will take priority.

Right. But before that can happen, Moderna, Pfizer, and other vaccine candidates must apparently face "science court." That's where they present all their data showing how and why their vaccine is effective. Pfizer and its German partner BioNTech, which have also asked for approval in Europe, are up first on Dec 10 – after their trial vaccine was found to be 95% effective last month. Then Moderna has the stage on Dec 17. Each could get an immediate thumbs up...depending on how court goes.

Moderna and Pfizer's vaccines are already breaking records, and getting FDA approval would be an unprecedented achievement. But before you bring your jeans back out of storage, health experts warn a vaccine isn't the end-all and be-all solution to combating the virus. And that wearing masks may be in style for a while longer.

Who's got business on the mind…

President-elect Joe Biden. Yesterday, he announced key members of his economic team, who will be tasked with helping the US rebuild. Many of the nominees have a background in labor rights. And three women are set to make history if confirmed:

Ethiopia. Over the weekend, Prime Minister Abiy Ahmed claimed victory in the country's northern Tigray region. Last month, Ahmed launched a military operation there after claiming the Tigray People's Liberation Front attacked a military base and tried to steal equipment. The weeks-long conflict has killed hundreds of people and displaced tens of thousands. Now, the rebel forces say they're stumped by Ahmed's announcement and that the war's not over. They reportedly told him to "stop the madness" and called on him to withdraw troops from the region. In a phone call with Ahmed yesterday, US Secretary of State Mike Pompeo shared the US's "grave concern" over the situation and called for a "complete end" to the fighting.

When you've finally figured out how to fold in the cheese…

Try protein folding next. Yesterday, DeepMind (a research company owned by Alphabet) said its AI has cracked the mystery behind how proteins fold. And can predict the shape of proteins within hours...as opposed to the years this process normally takes. Important, because the process is key to coming up with vaccines and treatments that respond to these proteins (think: in viruses, bacteria, and the human body). It's a win that's been 50 years in the making. And could help speed up vaccines and drug development for future diseases. Don't DeepMind if they do.

Which doctor will see (himself out) now...

Scott Atlas. Yesterday, President Trump's coronavirus adviser resigned. In his four-month tenure, Atlas regularly clashed with his coronavirus task force peers. He told Michigan residents to "rise up" after the state imposed new COVID-19 restrictions. And encouraged the White house to pursue herd immunity. Critics are saying 'Atlast.' Health experts had long criticized his lack of infectious disease expertise and denounced him for promoting false info on the virus (like discouraging the use of masks). The White House has yet to comment.

Marsai Martin. The "Black-ish" actress broke a Guinness World Record as the youngest Hollywood executive producer to work on a major production. Guess she's not so "little" anymore.

Who's inspiring us on GivingTuesday…