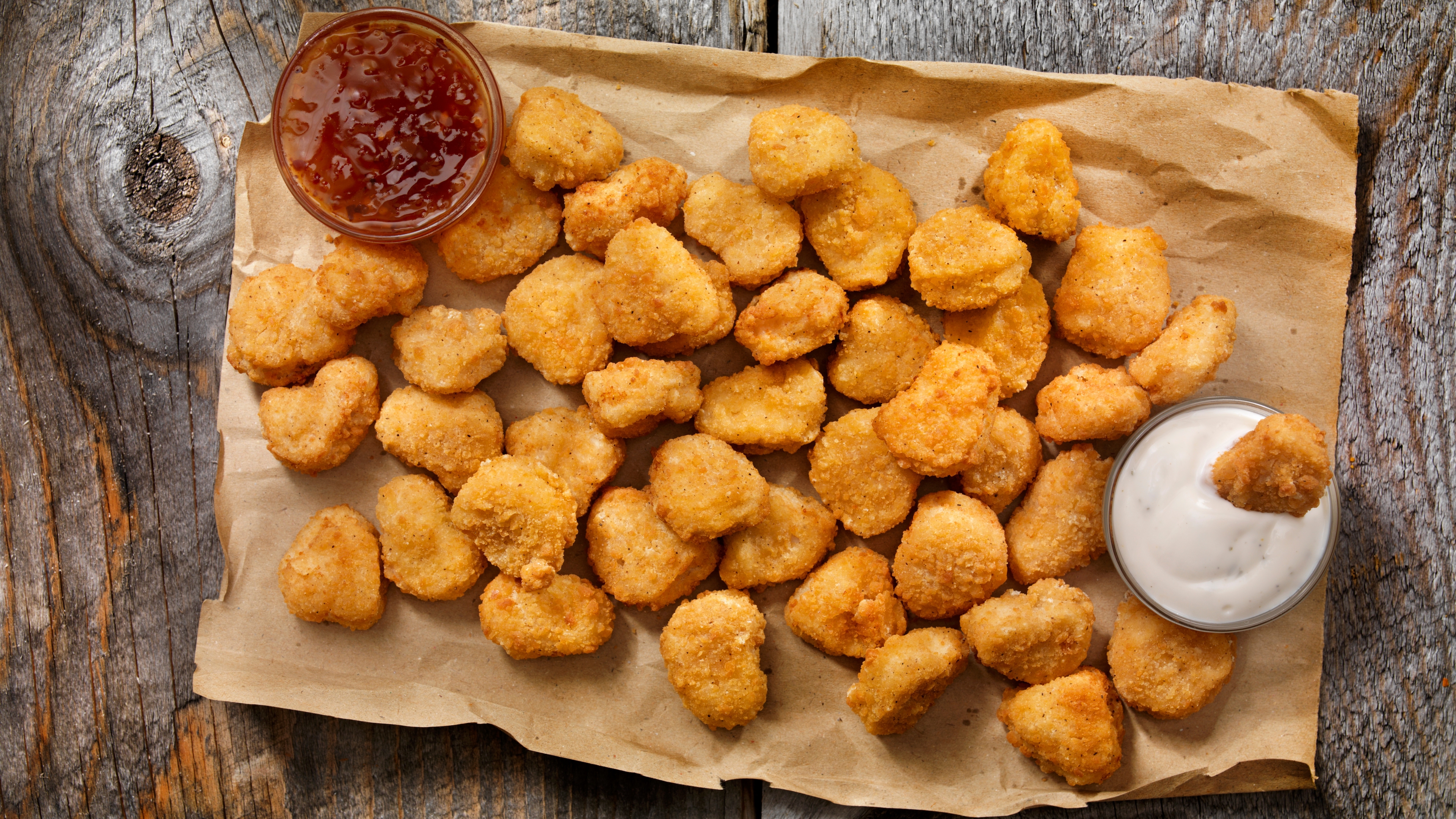 It's too early to talk about meat.

Steak with us: Singapore just became the first government to greenlight cultured meat. Kind of like lab-grown diamonds but...for meat. In this case, the chicken came first. Here's how it works: animal cells are obtained via a biopsy or a cell bank and are cultured (hence the name) in a lab. Then, they're fed a plant-based diet. Sprinkle in some scientific magic and voilà, we have the meats.

The animals are too. Especially since, barring the biopsy, none were harmed in the making of this meat. Singapore's Food Agency granted approval for Eat Just – a San Francisco-based company that has manufacturers in Singapore – to roll out and sell its lab-made chicken at a restaurant there. The meat, which reportedly has the same nutrients as conventional meat, will first be sold in the form of...drumsticks please...chicken nuggets. And the company hopes other countries will follow in Singapore's footsteps. The news comes as the $1.4 trillion meat industry faces criticism from animal-rights and climate-change activists.

Because tens of billions of chickens are killed each year. And livestock accounts for about 14.5% of the world's greenhouse gas emissions – about the same as the transportation industry (think: cars, airplanes). The high number is in part because livestock production requires a lot of land, energy, and water. Some animals (like cows and sheep) are also known to emit methane – a heat-trapping gas that's significantly more potent than carbon dioxide – contributing to global warming. Cultured meat could help countries cross the road to a more sustainable alternative. And in turn, help the planet.

The UN does. Yesterday, it warned that humanity is waging what it describes as a "suicidal" war on nature. And said we're close to a "climate catastrophe" with 2020 expected to be one of the hottest years to date. If cultured meat were to take over a portion of the farm animal industry, it could lead to a reduction in greenhouse gas emissions. And scientists say cutting down on livestock consumption is vital to combatting the climate crisis and the single best environmental action a person can take. Two birds, one stone.

Humans have been eating animals for millions of years. And our penchant for meat is contributing to a climate crisis. Now, Singaporeans are getting access to a more humane, Mother Nature-approved alternative. It's a wing-win. And a nugget of good news the rest of the world may want to get in on.

What's got some new recs and some old ones...

The CDC. If you could have been exposed to COVID-19 and are asymptomatic, the agency is now recommending you quarantine for 10 days (down from 14). After that, the risk of spreading the virus is about 1%. And if you get tested and it comes back negative, you can end your quarantine after seven days. The updated guidelines came as the agency warned Americans – again – not to travel for the upcoming holidays. It said this is the best way to stay safe amid a surge of infections, with the country surpassing 100,000 coronavirus hospitalizations yesterday.

What just hit the (chess) clock and said 'your move'...

Iran. Yesterday, it passed a law that would ramp up the country's uranium enrichment and keep the UN from inspecting its nuclear facilities as early as February. In 2015, a deal between the US, Iran, and five other countries lifted heavy economic sanctions against Iran in exchange for restrictions on its nuclear program. But in 2018, the Trump admin bowed out of the deal and reinstated sanctions, accusing Iran of violating the deal. Now, Iran's law enables it to enrich uranium to 20% (higher than its 3.67% limit under the deal, and enough for an atomic bomb) if the US doesn't lift sanctions within two months. It comes after the country's top nuclear scientist was killed last week – a move that has Iran and some US officials pointing fingers at Israel.

...Oh and speaking of Israel, its parliament is moving toward dissolving its gov. Meaning, it could be headed toward a fourth election in just two years.

UPS. Earlier this week, the shipping company reportedly gave retailers like Gap and Nike temporary limits on the number of packages it sends out this holiday season. The reason: Americans are Just Doing It too much. And by 'doing it' we mean clicking 'add to cart' so much that UPS is overwhelmed by the high volume of packages. UPSorry.

When Santa travels this year...