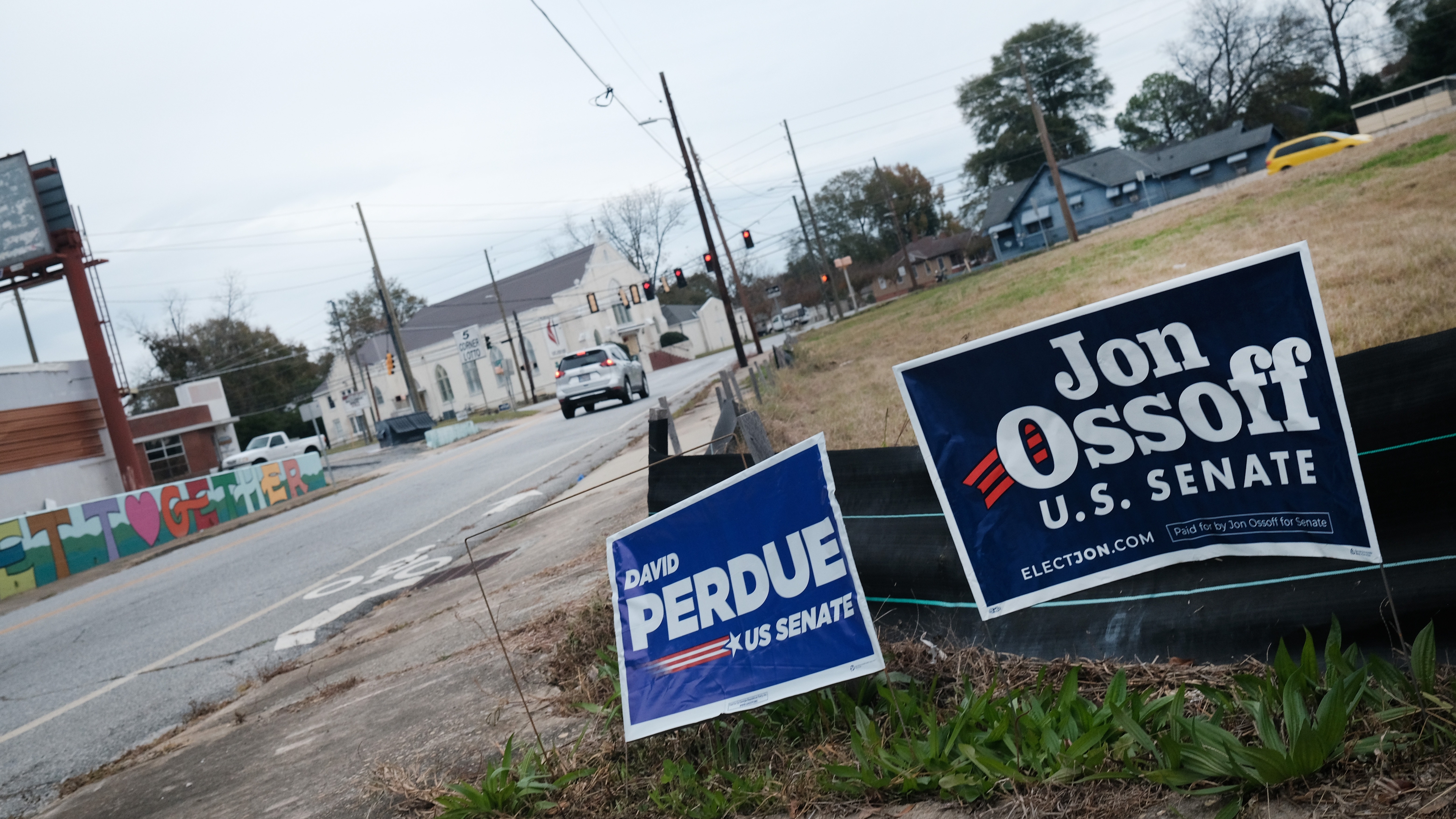 Trump and the Peach

The president's trying to take a bite of Georgia.

For the past several weeks, President Trump and his legal team have been working tirelessly to overturn the state's election results. There've been lawsuits and two recounts. But Trump's taken things up a notch. Over the weekend, he urged Georgia Gov. Brian Kemp (R) to call a special session of the legislature to overturn Biden's win.

He can ask. But the governor said a special session to choose new electors isn't an option under state or federal law. Some GA officials are saying 'peach, please' and starting to lose their patience. Many have rebuked Trump's election fraud claims and argued he was creating division within the party. Lt. Gov. Geoff Duncan (R) – who voted and campaigned for Trump – said the president's "mountains of misinformation are not helping the process." And yesterday, GA's secretary of state said the president's calls for a special session would amount to "nullifying the will of the people." Republicans are also worried that Trump's rhetoric could hurt their party's chances of winning the Jan 5 runoffs.

Right now, the Senate's fate remains in the balance as two races in Georgia could determine which party controls the upper chamber – which has had a Republican majority since 2015. Republican incumbent Sens. David Perdue and Kelly Loeffler will face off against Democrats Jon Ossoff and Raphael Warnock, respectively. Some GOP lawmakers are standing by the president. Others worry that Trump's ongoing claims of a "rigged" election will turn Republican voters away from the polls. PS: Today's the last day Georgians (including those who'll be 18 by Jan 5) can register to vote. Early voting begins Dec 14.

President Trump's latest rally was supposed to be spent campaigning for Sens. Perdue and Loeffler ahead of their races. But it seems to have turned into a last-ditch effort to change the state's election outcome in his favor. And with the latest rebuffs from GA Republican lawmakers, it doesn't look promising.

Where ending the pandemic is priority no. 1...

The US. President-elect Joe Biden is expected to nominate California Attorney General Xavier Becerra (D) for secretary of Health and Human Services (HHS). And Harvard professor and infectious disease specialist Dr. Rochelle Walensky to lead the Centers for Disease Control and Prevention (CDC). These are two of the most prominent positions that oversee the gov's response to COVID-19 – everything from quarantine guidance to allocating PPE to states. Becerra doesn't have a traditional public health background – but he spearheaded a multi-state lawsuit to defend the Affordable Care Act in the courts. If confirmed, he'd be the first Latino to lead the dept.

The UK. This week, Britain will begin offering doses of the Pfizer/BioNTech coronavirus vaccine. First in line: people over 80 years old, health care workers, and nursing home staff and residents. The gov has ordered 40 million doses, enough for 20 million people. And about 800,000 doses are expected to be available this week. Britain will be the first country in the Western world to offer the vaccine. It's reportedly the largest vaccine rollout in UK history.

...Oh and speaking of rolling things out, Russia's doing the same with its Sputnik V vaccine at 70 different locations in Moscow. The vaccine is still undergoing testing – raising concerns about its safety.

Who's got election updates…

Venezuela. Today, members of President Nicolás Maduro's United Socialist Party claimed victory with nearly 68% of the vote for the National Assembly. It was the last branch of government in the country not yet in Maduro's grasp. And is widely seen as the last democratically elected body in the country. Reminder: Venezuela is still a country of two presidents – socialist leader Nicolás Maduro and opposition leader Juan Guaidó. The US and dozens of other countries are team Guaidó. But Maduro – who's been president since 2013 – is backed by Russia, Iran, and China. The opposition had boycotted the election, calling it a "fraud," and a reported 31% of the 20 million registered voters actually participated in the election. Now, the opposition with Guaidó, who is the current head of the National Assembly, could hold a referendum over the next few days to counter the parliamentary election results

Where a mystery's one step closer to being solved...

Cuba. A recent report found that directed microwave energy is likely to blame for the neurological symptoms dozens of American diplomats have been experiencing. Reminder: Over the last four years, diplomats in Cuba and other countries (like China and Russia) have reported hearing high-pitched sounds and experiencing things like dizziness, nausea, and hearing loss. Now, we're finding out that radio frequency energy may be the reason – but no word on who's behind the attacks. Some gov officials have said the evidence points to the Kremlin, but the State Department says the investigation is still ongoing.

What's saying 'a person can dream'...

DACA. Last week, a federal judge ordered the Trump admin to fully reinstate the Obama-era program that protects over 640,000 young undocumented immigrants from being deported. Reminder: The admin has been trying to end DACA. When its efforts failed, it issued restrictions against new applications and limited renewals to one year instead of two. But those were invalidated. Now, a fed judge says the admin has to start accepting new applications starting today. As many as 300,000 new applicants could be eligible.

When you need the perfect playlist for holiday shopping...

The Queen of Christmas is here.