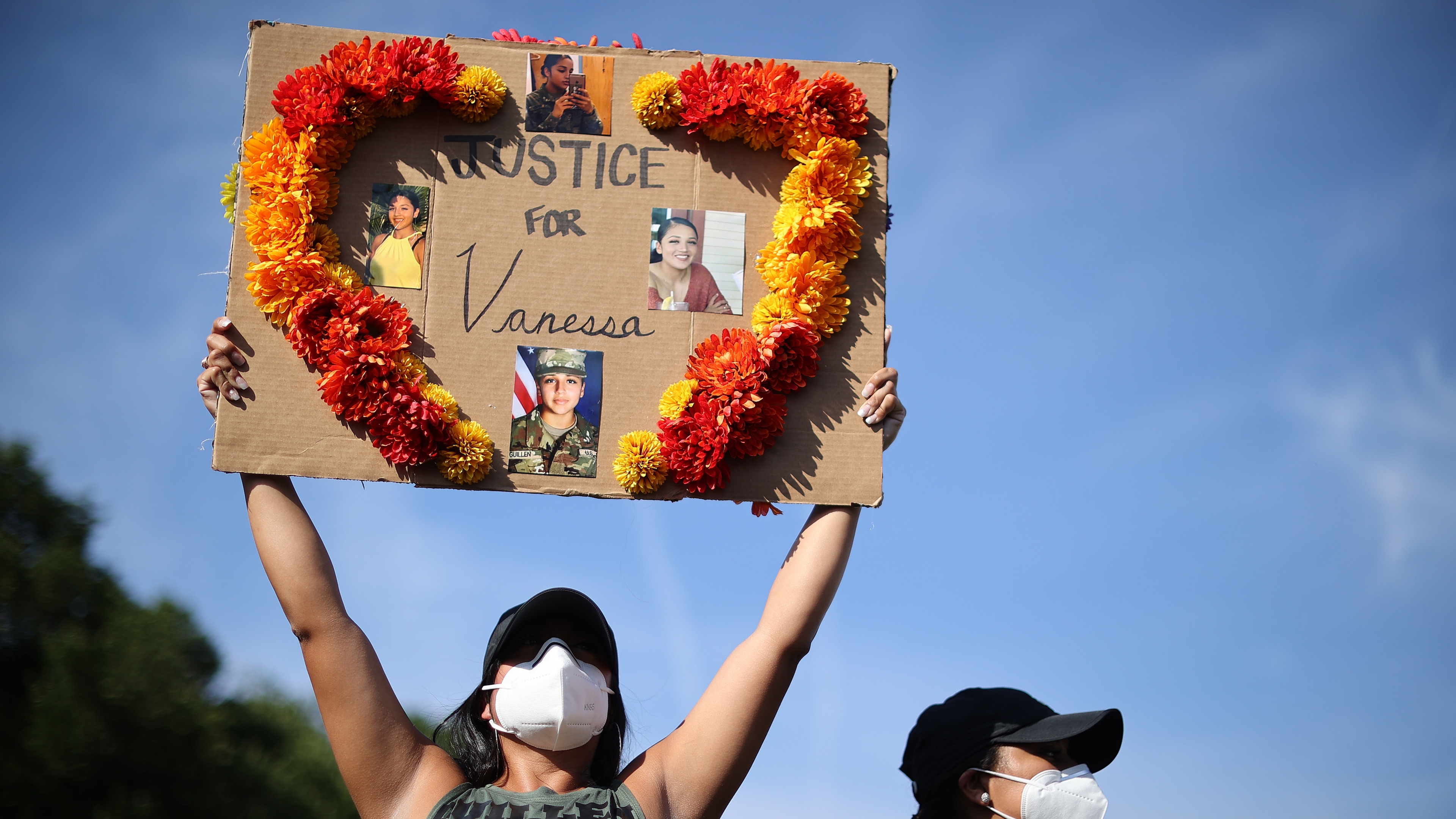 The news came after an independent panel reviewed the climate and culture at the Texas Army base. Home to about 36,000 soldiers, Fort Hood is one of the largest Army bases in the US. In recent years, it's seen dozens of cases of sexual assaults, suicides, accidental deaths, and homicides. And in 2020, the number of homicides there rose to five – higher than the last four years combined. One, in particular, gained national attention (including from politicians and celebrities) and prompted the review.

Spc. Vanessa Guillen. In April, 20-year-old Guillen disappeared from Fort Hood – soon after telling her family she'd been sexually harassed. For weeks the family demanded answers, accusing the Army of dragging its feet on the investigation into her disappearance. Over the summer, her remains were found about 30 miles outside of Fort Hood. Her accused attacker – a fellow soldier – died by suicide. Her story launched a wave of #IAmVanessaGuillen posts on social media from fellow service members sharing their experiences with sexual harassment and assault.

So what did the review find?

After 2,500 interviews and 31,000 responses to a survey, it found that Fort Hood's command climate was a "permissive environment for sexual assault and sexual harassment." That the Army's response and prevention program was "structurally flawed." And that many sexual abuse claims went unreported because soldiers feared retaliation. The review also noted that two decades of constant deployments drew attention away from soldiers' well-being. And contributed to social problems on the base.

Army Secretary Ryan McCarthy fired or suspended 14 officials from their duties – including a general. And called for a separate investigation focused on the base's Criminal Investigation Command unit – which is responsible for probing crimes on Fort Hood. The panel submitted 70 recommendations to end the toxic culture, focusing on things like protocols around missing soldiers and crime prevention. And as the Army continues its investigation, officers may face more disciplinary action.

The Army's move could be one of the largest disciplinary actions ever taken by the military service. And the investigation has provided a glimpse of what's been happening at Fort Hood for years, amid growing calls for transparency.

What's pulling out the big briefcase...

...Oh and if what happened to Pennsylvania Republicans is any indication of how this new lawsuit will go, SCOTUS isn't interested.

Casey Goodson. Last week, the 23-year-old Black man was shot and killed by a sheriff's deputy in Columbus, Ohio. Authorities said Goodson was shot after he waved a gun and refused the deputy's command to drop his weapon. But Goodson's family says he wasn't holding a gun, but a sandwich. And that he was shot multiple times in the back as he was entering his home. The deputy was not wearing a body camera. And the Ohio AG said the state Bureau of Criminal Investigation (the state agency that typically investigates police shootings) won't take up the case because the police took too long to hand it over to them. And because the agency wasn't called to the crime scene. The DOJ and FBI are launching a federal civil rights investigation.

The FDA. Yesterday, it confirmed that Pfizer and BioNTech's vaccine is 'the real deal.' Reminder: Last month, Pfizer said trials showed their experimental vaccine was 95% effective at preventing COVID-19. And tomorrow, it heads to "science court" to present all its data before a review committee. Which could make or break its approval for emergency use in the US.

What's trying to chew up your wallet…