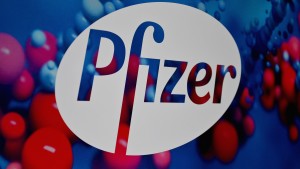 Canada is giving Pfizer a shot.

That's right. Yesterday, the country followed in the UK's footsteps and became the second Western nation to approve the Pfizer-BioNTech coronavirus vaccine. Now, our northern neighbors hope to roll out 249,000 doses by the end of year – starting as soon as next week. Health regulators have said nursing home residents and staff should be first in line but each province will make the call. And considering Canada's the world's second-largest territory, distribution will be a hefty task. But PM Justin Trudeau's saying 'yes cana-do' – and wants the majority of Canadians vaccinated by September 2021.

That's great. But what about the US?

The FDA's looking at the data. It's already confirmed that Pfizer's two-dose vaccine is 95% effective and safe in preventing COVID-19, there's an extra step. Enter: "science court." That's where Pfizer and BioNTech are heading today – where a panel of independent experts will act as a jury and pick apart the vaccine. If they're satisfied with the data, the FDA could grant emergency use. And 2.9 million initial doses could be going out to Americans within days. It's news that's welcome to some, but not all. Especially after the UK's saying 'you Ottawa know this.'

UK health officials are saying people with a "significant history of allergic reactions" should hold off on getting the vaccine. The rec came after two health care workers had adverse reactions after getting the first dose earlier this week. Worth noting: they are "recovering well." While Pfizer did not test people with a history of severe allergic reactions, the FDA found no serious side effects among the over 37,000 volunteers who got both doses.

Canada's the third country to say 'yes, please' to doing shots with Pfizer (Bahrain joined in on the fun last week). But the US seems to be taking the 'slow and steady' approach – at a time when it's recorded over 3,000 COVID-19 deaths in a single day.

What people are concerned about...

Brandon Bernard. Today, the 40-year-old Black man is scheduled to be executed for a 1999 robbery that resulted in two murders. At the time, Bernard was 18 years old. But some of his accomplices, reportedly only months younger than him, were tried as juveniles and avoided death sentences. The case is bringing attention to disparate sentences for juveniles and adults. And the role race plays in capital punishment. (In Bernard's case, 11 out of 12 jurors were white.) It comes after five jurors, a former US prosecutor, and thousands of others have been calling for clemency. But the Trump admin has been ramping up executions after ending a moratorium on the practice back in July.

The Seattle Police Department. This week, a federal judge found it in contempt for ignoring a court order against using chemical irritants and projectiles at Black Lives Matter protests. Like when it used pepper spray, blast balls, and paintballs against peaceful protesters in August and September. Now, the dept could face sanctions.

What just got poked…

Facebook. Yesterday, the Federal Trade Commission and 48 states and districts sued the social media giant for allegedly acting as a monopoly. The suits are calling for Facebook to hit 'undo' on purchases it made years ago, like Instagram in 2012 and WhatsApp in 2014. They say these are two of over 70 buyouts Facebook made to nip competition in the bud. But Facebook has a Story of its own. It says that if the FTC wanted to block a merger, it would have blocked the merger. Now, it's warning moves like this make the US an unpredictable business environment.

Who's back under a microscope...

Hunter Biden. Yesterday, the president-elect's son acknowledged that federal prosecutors are investigating him over his business dealings. Specifically, whether he violated tax and money laundering laws in his various business dealings abroad – including in China. The investigation dates back to 2018. But it was apparently put on hold in recent months because the Justice Dept prohibits actions that could influence the outcome of an election. Now, it's back on. Though it comes after the FBI reportedly dropped a similar investigation for lack of evidence. Hunter Biden says he's confident this investigation will show he handled things "legally and appropriately." President-elect Joe Biden is reportedly not a subject of the probe. But says he's "deeply proud of his son, who has fought through difficult challenges."

Google and Forbes are taking stock of 2020.