Daily Skimm: Georgia Runoffs, the Latest on COVID-19, and a Wilde Romance 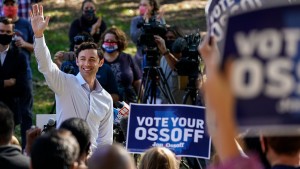 On the Grind in Georgia

Today, we may finally find out which party will control the Senate.

Am I having a flashback to the election?

No, don't worry. We'll leave 2020 in 2020. But Georgia can't say the same. Back in November, neither of GA's four candidates running for two Senate seats won the majority. So a runoff election was scheduled for today. Let's get into those races…

Perdue vs Ossoff…David Perdue (R) is trying to keep his job as a Georgia Senator – which he's held since 2015. He's running on a conservative campaign: he's pro-gun rights and anti-abortion. He's also a close ally of President Donald Trump. His opponent, Jon Ossoff (D), is running on a campaign that includes strengthening Medicare (think: he wants Americans to have a public health option). He also supports President-elect Biden's decision to rejoin the Paris climate deal.

Loeffler vs Warnock...Incumbent Sen. Kelly Loeffler (R) was appointed to her seat after the previous senator resigned, and she'd like to stay there. She's also pro-gun rights, anti-abortion, and a Trump loyalist. Just yesterday, she announced she would object to the certification of Biden's Electoral College win. And she's recently come under fire for posing in a photo with a former KKK member. Her opponent, Raphael Warnock (D), is a reverend at Ebenezer Baptist Church – where Dr. Martin Luther King Jr. served as co-pastor with his father. He's running on a campaign that includes building on the Affordable Care Act, reforming the bail system, and ending mass incarceration.

Anytime. So let's get back to control of the Senate. If Perdue or Loeffler wins, the Republican Party keeps the Senate. That would give them the power to block certain bills from the House and Biden's agenda (think: on health care and environmental restrictions). Meanwhile, if Ossoff and Warnock both win the seats – something Dems haven't done in the state in nearly two decades – the Senate will be tied 50-50. And VP-elect Kamala Harris will have to come back to the Senate to serve as the tiebreaker for future votes.

That could depend on how close it is. More than 3 million Georgians have already voted early in the runoff – the highest number since 2008. But many others will head to the polls in an especially contentious time for their state. Reminder: Over the weekend, President Trump tried to pressure GA Secretary of State Brad Raffensperger (R) to defy the state's election results and "find 11,780 votes." While GA's election officials have tried to reassure their constituents on the safety of their votes (in both the presidential election and the runoff), the news was enough to spread the seeds of doubt.

Georgia's race will determine control of the Senate. For those who haven't yet voted, polls are open 7am-7pm ET, and you can return your mail-in-ballot in person. And with COVID-19 concerns, here's how you can prepare to vote safely.

The UK. Yesterday, the country imposed its third national lockdown amid a surge driven by a new coronavirus variant. It also announced plans to delay giving the second doses of the Pfizer-BioNTech vaccine – with the hopes of getting the first doses to more people, faster. Pfizer and EU health experts are saying 'please don't' as trials weren't conducted that way and they don't have enough data to know if a single dose can provide proper protection against the disease. But UK chief medical officers say 'it's worth the risk.' And other countries may start using the same technique.

The US. Yesterday, some governors told hospitals to give their COVID-19 vaccines quicker...or else. NY Gov. Andrew Cuomo (D) threatened to give out fines (up to $100,000) and restrict further doses to hospitals that don't administer their supply of vaccines within a week of receiving them. In Florida, Gov. Ron DeSantis (R) said that doses of the vaccines will go to hospitals that dispense them the quickest. FL will also deploy 1,000 nurses to administer the vaccine and will keep its state-run sites open seven days a week.

Saudi Arabia and Qatar. Yesterday they announced they're patching things up. In 2017, Saudi Arabia led a group of Gulf nations – Egypt, the United Arab Emirates, and Bahrain – to cut ties with Qatar, accusing it of ties to terror groups and of playing too nice with Iran. But now, after the Trump admin brokered a deal, the two will drop their public dispute. Saudi Arabia reopened its airspace yesterday as well as its land and sea borders. In exchange, Qatar Airways will drop its expensive lawsuits against the countries. As one Trump official reportedly put it, they won't "love each other and be best friends" but they might be able to work together on regional issues. Good timing, since the Gulf Cooperation Council (GCC) meets to address regional concerns...today.

...Oh and speaking of discussion topics: Iran. It's been making moves recently that put neighbors on edge. Like upping enrichment of uranium beyond the limits of the nuclear deal. And seizing a South Korean tanker. All of this has everyone wondering how the incoming Biden admin will respond.

Alphabet workers. Yesterday, more than 200 employees at Google's parent company signed their union cards – officially making the Alphabet Workers Union a thing. Google has faced growing discontent from its employees, who back in 2018 staged a 20,000-person walkout over the company's handling of sexual harassment. This union is inclusive of all Google and Alphabet employees and even includes contract workers. It's viewed as one of the largest and most high-profile unionizations of tech workers to date.

Who may not be feeling quite so proud…

The leader of the Proud Boys. Yesterday, DC police arrested the head of the far-right group – the one President Trump told last year to "stand back and stand by." He was accused of burning a Black Lives Matter banner taken from a historic Black church last month. But he also faces weapons charges after authorities allegedly discovered two high-capacity magazines on him. All of this comes in advance of pro-Trump protests expected tomorrow, with authorities concerned about the potential for violence.

Who's going Wilde for watermelon sugar...