Daily Skimm: Accountability, Unfollowing Trump, and "Sex and the City" 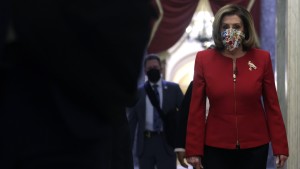 House Democrats will be taking action against President Trump.

Yes. Last week, hundreds of Trump supporters stormed the Capitol in a deadly siege – scaling walls, shattering windows, beating police officers, and breaking into federal offices. A gallow was erected. Some chanted "hang Pence." Two men allegedly carried zip-tie handcuffs. A pickup truck carrying Molotov cocktails and guns was found near the Capitol. And by one account, rioters were mere seconds away from breaking into the Senate chamber while congressional reps were present. Five people have died.

Tell me about Trump's role.

The president is being accused of inciting the insurrection. At a rally before the attack, Trump told supporters to "walk down to the Capitol" and "fight like hell." He also said that they'll "never take our country back with weakness." Now, some lawmakers – including those whose staff had to hide during the attack – are saying 'enough.'

Today, House Democrats are working to pass a resolution calling on VP Mike Pence and Trump's Cabinet to invoke the 25th Amendment. If they agree, Pence and the Cabinet would declare the president unfit for office, making Pence the acting president. But it seems unlikely, so Dems have a backup plan: they'll introduce articles of impeachment against the president. The House could vote on it as early as tomorrow. Then they would normally send it over to the Senate, but given that the Senate's on recess until Jan 19 (the day before President-elect Joe Biden's inauguration), the plans may lay dormant for a while. Read: a few months.

House Majority Whip James Clyburn (D-SC) said the House could wait until Biden's first 100 days are over, so as to give the new president time to get the ball rolling on his agenda. It would be an unprecedented move: never has a president faced an impeachment trial after leaving office. Nor has one been impeached twice. If found guilty, the Senate could disqualify Trump from ever holding office again. Meaning, he wouldn't be allowed to run in 2024 – something he's reportedly been planning.

Democrats say repercussions are necessary in order to protect Americans. One poll shows that more than half of Americans believe Trump should be removed from office. But House Minority Leader Kevin McCarthy (R-CA) said that impeaching Trump with less than two weeks in office would "only divide our country more." Republican Sens. Pat Toomey (PA) and Lisa Murkowski (AK) are urging Trump to resign, saying he's caused enough damage. Meanwhile, Trump has reportedly talked about trying to pardon himself.

There are nine days left in Trump's term. But that is not stopping lawmakers from pursuing accountability for what happened last week from the highest levels of US government: the president himself.

Social media companies have temporarily or permanently banned @realDonaldTrump. Following the violent attack on the US Capitol last week, Facebook, Twitter, Reddit, Pinterest, Shopify, Snapchat, TikTok, Twitch, and Discord have restricted President Trump's account or accounts and hashtags affiliated with violence and pro-Trump conspiracies like #StopTheSteal. And it's got people talking about…

Free speech…Some people are asking about it. Here's what you need to know: The First Amendment generally applies when the gov restricts a person's freedom of speech. In this case, private companies (think: Twitter and Facebook) have the liberty to set their own rules and guidelines, and have a right to hit 'mute' on any accounts on their platforms not following T&C. Now, companies that once exempted world leaders like Trump are saying 'a line's been crossed.' But some critics are saying 'too little, too late' and pointing at Trump's years of inflammatory posts. Others are concerned about what this means more broadly: a handful of people able to decide at whim which types of content can reach Americans' eyes.

Parler...The relatively new social media platform has soared in popularity among conservatives who've seen greater restrictions on FB and Twitter. Mostly because, unlike Twitter and Facebook, it's got lax content moderation and doesn't prohibit hate speech or disinformation. But after some users encouraged violence and crime (some even called for violence ahead of Inauguration Day), Apple and Google cut off the service. And Amazon – which hosts the server for Parler – also banned it for its violation of company rules. Now, Parler appears to have gone dark as it looks for another host.

Indonesia. Over the weekend, a passenger jet carrying 62 people crashed into the Java Sea minutes after takeoff. The cause is still under investigation but the 26-year-old Boeing plane was flying amid heavy rain when it lost over 10,000 feet in altitude in less than 60 seconds. Authorities have located the black boxes and are continuing with search and rescue operations. This is the first major crash to affect Indonesia since the Lion Air crash in 2018 – when 189 passengers and crew of the Boeing 737 Max were killed. And it raises further scrutiny around the country's aviation sector, which has been plagued by crashes and safety concerns.

Where there are coronavirus updates…

The US. Last week, it recorded over 21,000 coronavirus-related deaths – the deadliest week to date. One analysis shows that America has been averaging over 2,700 daily deaths and has seen hospitalizations top more than 131,000. The numbers come amid the nation's largest ever vaccination effort, which has faced criticism for its less-than-warp speed.

Africa. It has topped 3 million confirmed COVID-19 cases. South Africa reportedly accounts for more than 30% of the continent's total infections (over 1.2 million cases) and is currently dealing with a more contagious variant of the virus. And while the high numbers could be because of the country's high testing rate compared to other African countries, the president is weighing additional restrictions as the country awaits the first 1.5 million doses of the AstraZeneca vaccine later this month.

What'll have people geeking out...

CES 2021. Today, the 54th annual tech show kicks off virtually for the first time ever. It could showcase disinfectant gadgets, next-gen fitness equipment, and robots that'll help you cook dinner, among other tech. Code us in.

Who's planning their return...

You couldn't help but wonder...